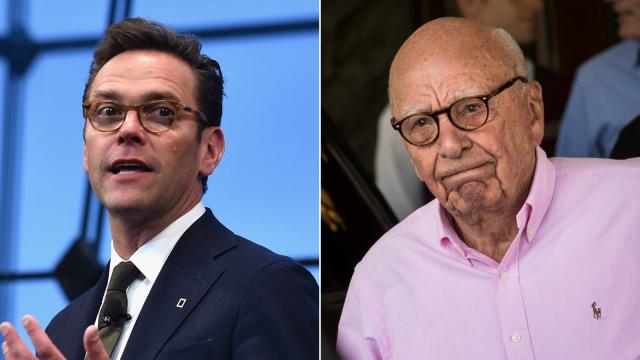 CNN — Rupert Murdoch's son and his wife are lashing out against his father's sprawling media empire for how it covers the climate crisis, especially in light of the fires raging in the family's native Australia.

In the past year James Murdoch has stepped away from the family's business — and its politics. He and his wife Kathryn have made statements that set them apart from the Murdochs' conservative bent.

In comments first made to the Daily Beast, a spokesperson for the couple said "Kathryn and James' views on climate are well established and their frustration with some of the News Corp and Fox coverage of the topic is also well known."

"They are particularly disappointed with the ongoing denial among the news outlets in Australia given obvious evidence to the contrary."

Murdoch's News Corp owns a large chunk of Australia's media, and has been criticized for coverage that suggested the fires are no worse than they were in the past, or that they are caused by arsonists, not climate change.

Australian Prime Minister Scott Morrison, who has also downplayed the fires' connection to climate change, has been largely supported by Murdoch's papers in Australia, most of which endorsed him in the last election.

Some commentators and hosts on Fox News have also blamed the fires on arsonists.

It's not the first time the younger Murdoch, who left the family business but continues to sit on News Corps' board, has criticized his father's company. But this is one of the strongest condemnations yet.

In an interview last September with the New Yorker, James said "There are views I really disagree with on Fox."

The same month Kathryn spoke to The New York Times about the couple's climate activism (Kathryn has also long been active on Twitter on the subject.)

The criticism aimed at Rupert Murdoch's news outlets is also coming from within the company. Last week Emily Townsend, a commercial financier manager for News Corp in Australia, sent an all-staff email accusing News Corp of a "misinformation campaign" in relation to the fires to "divert attention away from the real issue," climate change, according to the Guardian.

"I find it unconscionable to continue working for this company, knowing I am contributing to the spread of climate change denial and lies. The reporting I have witnessed in the Australian, the Daily Telegraph and the Herald Sun is not only irresponsible, but dangerous and damaging to our communities and beautiful planet that needs us more than ever now to acknowledge the destruction we have caused and start doing something about it," she wrote.

A spokesperson for Fox did not respond to a request for comment on James and Kathryn's statement.

News Corp, which declined to comment, has previously denied it has helped promote climate change denial, telling The New York Times last week the company has "recognized Australia is having a conversation about climate change and how to respond to it."

The Australian, one of News Corp's papers and a target of critics who say it's been downplaying the link between climate change and the fires, defended itself in an editorial over the weekend, writing "in our coverage, The Australian's journalists report facts about how to tackle bushfires and about how to deal with the impact of climate change. Second, we host debates reflecting the political division that exists in Australia about how to address climate change without destroying our economy."

Last year the elder Murdoch said on a News Corp shareholder call "there are no climate change deniers around, I can assure you."

And on Monday, the company announced it was donating $5 million AUD (approximately $3.45 million USD) to the Australian bushfire relief, in addition to the $4 million AUD (around $2.76 million USD) that both Rupert and his older son Lachlan Murdoch have donated to relief efforts.

"It is clear that confronting the bushfire disaster in Australia requires both an immediate response and an ongoing investment in rebuilding the lives and livelihoods of those most affected by the fires across the country," Rupert Murdoch said in a statement announcing the donation. "As a company with roots in Australia and an abiding commitment to its people and communities, we are determined to help, both in this time of great need, and well into the future, as the hard work of restoration continues."