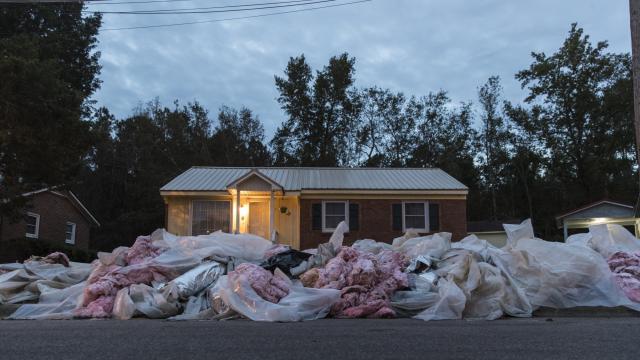 EDITOR'S NOTE: James Leutze is chancellor emeritus of UNC-Wilmington and a former member of the N.C. Coastal Resources Commission. He is author of “Entering North Carolina: Turn Clocks Back 100 Years,” a reflection on the historic connections between North Carolina’s post-Civil War politics and today’s.

Recent hurricanes Florence and Michael, and the damage to our coastal region, highlight two things:

Unfortunately, both of these are political as well as scientific. The current hyper-partisan atmosphere for discussing solutions is toxic and divisive.

Let’s start with sea level rise. Several years ago I served on the N.C. Coastal Resources Commission when we began examining this subject. Although there are some differences of opinion, the majority, plus our expert science panel, thought coastal counties should at least consider anticipating sea level rise when in long range infrastructure planning. Our recommendation – a suggestion not a requirement – got an immediate response. A group called “North Carolina Twenty” (for the 20 coastal counties) was quickly organized and headed largely by real estate interests who feared our estimates would drive away potential investors.

They drew a lot of attention, mostly in Raleigh, from legislators who decided that no one had to follow the CRC’s recommendation. In fact they should not consider sea level rise in their planning.

The commission met the same response when it suggested that sea level rise’s dangerous twin, climate change, should prompt stricter building codes so new homes would be more storm resistant. While the legislature did not get involved, powerful interests including the Home Builders Association and Realtors rallied opinion against any new requirements. Why?

Now I know there are many responsible and principled people in both professions, however I was advised that some cynically saw a destroyed home as an opportunity for more business.

Now to unequal distribution of income.

Anyone familiar with coastal North Carolina knows that there is a narrow band of wealth right along the coast adjacent to a wider band of poverty stretching from Virginia to South Carolina. It was popular a few years ago to talk about 2 North Carolinas. That recognition seems to have slipped from our consciousness. The aftermath of these two recent storms should bring it back to the forefront. This wide band of poverty is where the most destruction as well as the slowest recovery occurred. The people living in that area often build cheaper homes in flood plains and don’t buy flood insurance. These people aren’t dumb, lazy nor improvident. They are just poor.

What is to be done? Here are some simple steps:

In practical terms this means that in case of an emergency, two of three families can’t afford an unexpected $600 expense. Thousands of North Carolinians face repair/replacement costs far greater than that. This is a national problem that has only gotten worse in the past 20 years.

The last tax cut helped those who least needed help. Since tax codes aren’t likely to change there will have to be other government programs. To help the poor protect their property, there needs to be grants that help raise their houses or otherwise protect their property; flood insurance should be available at reduced rates; encouragement and grants are necessary to help them move to higher ground combined with discouraging rebuilding along vulnerable creeks or rivers. Yes, I said government help. It is critical to the solution. Call it socialism if you want. I call it realism.

None of this is easy. It is a “pay me now or pay me later” proposition. There no longer is time to wait. Trusted climatologists warn (ok, excluding a few outliers) time is not on our side.