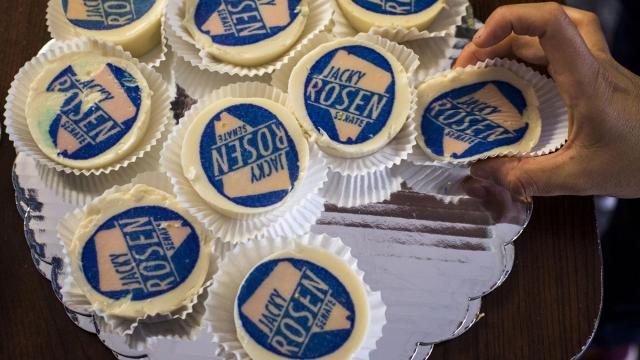 Milling among a crowd celebrating Mexican Independence Day in a park, Rosen, the Democratic Senate nominee for Nevada, had much on her mind. But to get voters to listen, she needed to make an impression first, with precious little time left before the November election.

“Hi, I’m Jacky,” she said over and over in a hot breeze that smelled like corn dogs — the world’s best, if you trusted the truck making them. An aide motioned for someone to take a picture. “I’m Jacky.”

Some people nodded. Others looked confused.

A first-term congresswoman, Rosen is in an extraordinary, and tricky, situation: She is running against Sen. Dean Heller, the Republicans’ most endangered incumbent, in a year when his party can only afford to lose one seat. And she initially had a powerful weapon: The GOP-led confirmation hearings for Judge Brett Kavanaugh, which enraged many women and Democrats, and Heller’s gaffe that the sexual assault allegations against the nominee would just be a “hiccup” in his rise to the Supreme Court.

But Rosen, a 61-year-old former synagogue president, is now among the Democrats nationwide facing new energy from Republican voters who are defending Kavanaugh and his patron, President Donald Trump.

It’s a political moment that requires deft skills on the campaign trail — but Rosen is still a newcomer to politics, neither cagey nor glossy nor particularly electrifying. In a campaign season filled with rising Democratic stars like Beto O’Rourke in Texas and Alexandria Ocasio-Cortez in New York, she is not a phenomenon.

Perhaps more significantly, Nevada is Nevada. Yes, the state voted for Hillary Clinton in 2016 by more than 2 percentage points, but it has not had a Democratic governor since 1999. Neither quite red nor quite blue, it may be receptive to a fiery takedown of Heller over Kavanaugh. Or it may not be.

Unlike other states with competitive Senate races where the Kavanaugh issue has thundered into prominence, including North Dakota and Missouri, it is far from clear how the bitter nomination battle will affect the Heller-Rosen race. Political observers say Republican enthusiasm for getting the judge confirmed — which should be decided this weekend — could help Heller. But the issue also may not measurably change the turnout for either party’s base in a state where political energy is focused elsewhere.

Even Rosen isn’t sure. In an interview, she did not criticize Kavanaugh nearly as much as some other Democrats have, and added that she would hit Heller over the confirmation process but also talk plenty about health care, education and immigration.

If Heller votes to confirm Kavanaugh, she said, “I think he’s going to have to do a little bit of answering for that.” It hardly served as a sharp rebuke. A moment later, however, she warmed to the subject, saying of her opponent: “He’s just not listening to the voices in Nevada, to Nevada women, to their families who love women, who may have been victims of sexual assault.”

On most issues and political fights, however, Rosen talks about collaboration and compromise, even as the Democratic base nationally clamors against Trump. She does not extol the virtues of Medicare for All or abolishing the Immigration and Customs Enforcement agency. She does not extol much of anything at all.

Yet it is Jacky Rosen, whose most notable previous political experience was perhaps keeping the peace among spirited congregants at Congregation Ner Tamid, who must choose a strategy in these final weeks on Heller, Kavanaugh and so much else.

Her allies, at least, are confident that she has the savvy and instincts to help deliver the Senate for the Democrats in November.

Recent polling shows Rosen in a very tight race against Heller, a longtime politician who beat Berkley in 2012 in his Senate bid.

Asked to explain her swift political rise during a separate interview at her campaign office here, Rosen — polished, practiced, composed — spoke about her willingness to take chances and the support she has received, then drifted into platitudes.

But she knows a few. In early 2016, then-Senate Minority Leader Harry Reid — whose influence over the state’s Democratic Party has its own moniker, the “Reid machine” — hand-picked Rosen to run for an open House seat. She won, even as Trump won her district. It was Reid, too, who helped persuade Rosen to run for Senate. Reid, through an intermediary, declined to comment. “I tell my daughter who just graduated college, I always tell her, ‘Don’t not do something just ‘cause it’s hard. Time is going to go by anyway,'” Rosen said.

Nevada’s electorate is divided between heavily Republican rural areas in the north and a growing Democratic population center around Las Vegas in the South. A growing number of Californians — left-leaning, Democrats hope — along with companies like Tesla and Google, are moving to the state, and the unemployment rate is below 5 percent. Its population is increasingly diverse. Because it is so split politically, Nevada’s statewide officials tend toward relative moderation.

Rosen’s supporters view her as a viable alternative, a left-of-center Democrat whose biography and sparse voting record leave Republicans with little to attack. She supports a Medicaid buy-in program. She wants comprehensive immigration reform and has backed stricter gun control legislation. If Rosen is understated — more Mojave Desert beige than Las Vegas neon — that, her backers say, is the point.

Heller, though, has never lost a race, and his defenders believe he will ultimately prevail.

“I think you have to have a very compelling reason to get rid of an incumbent U.S. senator,” said Sig Rogich, a longtime Republican strategist in Nevada, “and there isn’t one.”

Late last month, Trump appeared alongside Heller at a rally in Las Vegas and criticized Rosen. “Wacky Jacky,” he called her, employing his fondness for derogatory nicknames. “She’s wacky.”

Rosen’s response on Twitter was brief: “Grow up.” Rosen was born and raised in Chicago. Her father, a first-generation American who spoke Yiddish as his first language, was an auto salesman. Her mother was a homemaker. Rosen was a member of the drama club and remembers playing Mrs. Webb in a high-school production of “Our Town.”

When Rosen was in college at the University of Minnesota, her parents moved to Las Vegas, where she spent a summer working as a cocktail waitress at Caesars Palace. “I was a college student from the Midwest,” she said, “so I was very much like a fish out of water.”

She graduated in December 1979 with a degree in psychology, then moved to southern Nevada and worked for many years as a computer programmer.

Several years ago, she was elected president of Congregation Ner Tamid, among the biggest synagogues in the state. There, she helped reduce the synagogue’s expenses, in part by installing solar panels.

“She was very fiscally sound,” said Rabbi Sanford Akselrad, the synagogue’s spiritual leader and one of Rosen’s friends.

Rosen’s leadership drew the attention of one of the synagogue’s members, Elissa Cadish, a district judge. After many people rebuffed Reid’s overtures to run for the open congressional seat, Cadish recommended he call Rosen.

“They asked a lot of the usual kinds of people to run,” Rosen said, before speculating that other possible candidates saw the race as too risky. “No one told me that. But I’m assuming this is why they didn’t want to do it.”

And though some friends say she was never particularly political — “Who knew she was going to go into politics?” Akselrad said — they also say the ease with which she has taken to public office is not surprising.

Part of Rosen’s challenge, including over Kavanaugh, is that she prefers peacemaking. She is a member of the Problem Solvers Caucus, a House group that tries to reach bipartisan agreements on policy issues like infrastructure. She boasts about being ranked the fifth-most bipartisan freshman member in the House. Though she called some of the Trump administration’s policies “reckless,” she also said she agreed with the president on some things, including his decision to move the U.S. embassy in Israel to Jerusalem. (Though she said that she did not like how he did so “unilaterally.”)

Rosen’s detractors call her inexperienced and ineffective. And in an ad, Heller’s campaign charged that she inflated her resume, saying that she did not earn a degree in computers, as she has said, and that she exaggerated her claim that she built a business.

In response, Rosen said she had received an associate degree in applied sciences in computing and information technology, a claim that The Las Vegas Review-Journal verified. She also released an ad stating she “ran an independent consulting business.”

Rosen’s biggest hurdle may be that Heller, who has been in politics for some 30 years, is simply better known. He lives on a ranch. He rides horses at parades. While Heller’s “hiccup” line about Kavanaugh drew national media attention, it is unclear if it has damaged — or helped — him significantly in Nevada. (Rosen began running a digital ad this week about his support for Kavanaugh; she said she had not decided whether to cut a TV commercial on the subject.) Quincy Branch, 41, who runs an independent insurance agency and previously voted for Heller, noted the senator’s advantage before a round-table Rosen held recently with African-American entrepreneurs.

“He’s been here,” Branch said, about Heller. “If Jacky can wedge that, then I think she has a stronger chance.” He said he was undecided in this race.

Rosen, as most candidates do, projected confidence heading into the last weeks before the election, brushing off the suggestion that Heller’s name recognition would help. “They may know him,” she said, “but they’re not happy with him.”

On a recent weekend afternoon, before she made her way to the Mexican Independence Day celebration, Rosen was in East Las Vegas, a lower-income part of the city. A small, largely Hispanic crowd — part of an important coalition of voters for Democrats — had gathered for an event to kick off Hispanic Heritage Month, and Rosen paused frequently to allow a translator to repeat her words in Spanish.

“I’m the granddaughter of immigrants,” she said. A child hummed somewhere in the audience.

At the end of her speech, she urged everyone to get out the vote. She told them to text a number to support her campaign, and tried repeating the number in Spanish.

“How’s that?” she asked, triumphantly.

Then she set off into the desert heat, ready to introduce herself anew.