JACK BETTS: Western fires ignite memories of loss, rebuilding and what matters most

EDITOR'S NOTE: Jack Betts is retired associate editor of The Charlotte Observer. Based in Raleigh, N.C., he wrote editorials and a weekly column on politics. He now lives in Meadows of Dan, Va.

The pictures from out west make me shudder all over again. They take me back to a fall day a few years ago. I was tidying up the old garden down by the creek, stacking pepper cages and mowing the last of the tomato stalks. Over the ridge on the north side of our dirt road, an interesting cloud was billowing up, the kind of thing that make life up here a constantly fascinating place.

Then my blood ran cold in a rush of dread. That was a smoke plume, and it boiled over a half-century-old cabin called Hemlock Hill, an A-frame perched on the Southern rim of the Rock Castle gorge that my wife’s parents had built in the mid-1960s. For decades it had been the center of our family’s get-togethers — Easter Egg hunts under the majestic hemlocks, summer camp for the grandchildren and the dogs, merry Thanksgiving gatherings for a family spread out from coast to coast. It was on fire, and it was clear what would happen next: It would burn to the ground, just as our own home across the road had burned to cinders six years earlier.

That fire sprang up one hot day in June of 2010 as hundreds of lightning bolts shattered the calm of upper Patrick County, VA. One bolt hit a poplar tree just off the corner of our two-story log home, built for a retirement that we had yet to take and jumped to the house, investigators later concluded. We were still living in Raleigh then and had just returned from walking our dog around our North Glen neighborhood. I heard my old flip phone beep and picked it up to see the Patrick County Sheriff’s Department had tried to reach us.  “Mr. Betts, your house on fire.  Looks like a total loss,” the dispatcher told me when I reached him a few moments later.

It was. The volunteer fire departments in Meadows of Dan, Woolwine and Laurel Fork had gotten to the scene pretty quickly after an alarm went out, but by that time the fire may have been burning for hours. Firefighters who responded to the log home fire told me the fire was so hot that the paint started to bubble on one of their engines, so they backed off to one of our pastures. Their job at that point was to keep the fire from spreading to nearby woods, and to bring the blaze under control. There was nothing else to save. The house had burnt mostly to the ground, with just one corner of logs above the still-smoking, stinking carcass.

We were fortunate. No one got hurt. We only lost old stuff, the kind of attic furniture you move into a house until you can afford better stuff. But there were things we held dear.

The old heart pine table my wife’s family had eaten breakfasts on for decades. My father’s ancient LL Bean hunting jacket. My 1940 Kay bass fiddle. A printer’s type case that held mementos of my newspapering career — my cast-lead byline from a story long ago, my congressional press pass, a leaden masthead from the old Greensboro Daily News, circa 1975. A Gold Star Flag that my grandmother sewed and displayed on her front porch, indicating her youngest would not be coming home from France just weeks before the end of the War to End All Wars. 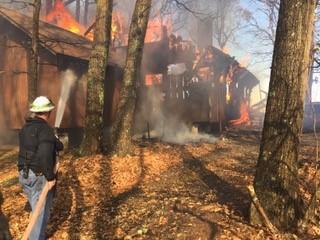 And so it was with the strange fire that burned Hemlock Hill. It had been rented out for the weekend, and the visitors had left the place an hour or so before the fire showed itself. No one was hurt. The only things lost were old things that no one would regard as valuable — no one but three generations of a family that had gathered there for so long and had taken for granted it would always be with us.

Now on the evening news we see the horrifying pictures of vast areas on fire, of fire tornadoes swirling and clouds of smoke rising miles into the skies, entire towns and communities converted to ashes, lives taken even as they were trying to escape wildfires that seem to spread faster than gunfire.

Our fires were nothing compared to theirs. We lost houses and dozens of trees, but our woods survived. We had insurance. We could and did rebuild.

But we learned many of the same lessons. Don’t take anything for granted. Something you planned and hoped and built over a lifetime can go up in smoke overnight.

Material possessions are just stuff. It’s the lives of your family and of your friends and neighbors who matter most, always. But the horror of a deadly fire, and the destruction it causes, will haunt you for years.