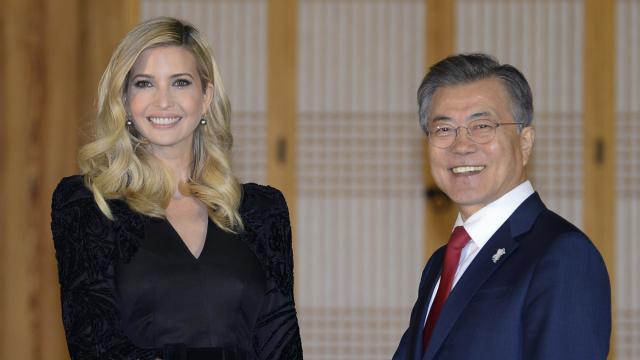 (CNN) — Ivanka Trump is leading the US delegation to the 2018 Winter Olympics closing ceremony, and the trip has thus far proved to be an exercise in diplomacy for the first daughter and senior adviser to the President.

After the nearly 15-hour commercial flight to South Korea from Washington, Trump, joined by members of the US delegation including press secretary Sarah Sanders, headed to the Blue House, the official residence of South Korean President Moon Jae-in and first lady Kim Jung-sook.

Trump met privately with the South Korean President to brief him on economic sanctions against North Korea that the White House released Friday.

"Trump delivered a personal message to President Moon from President Trump about today's North Korea related sanctions announcement at a small meeting at the Blue House. They also discussed the continued effort on the joint maximum pressure campaign against North Korea," a senior administration official said in a statement.

Speaking Friday to reporters at the White House, Treasury Secretary Steven Mnuchin said Trump has "been part of the team" as the White House puts pressure on North Korea.

"Ivanka Trump has been briefed on this. She has been part of the team. She had dinner with President Moon and had a private discussion in advance about this occurring and this has been an interagency process," Mnuchin said.

Trump and husband Jared Kushner's security clearance status and access to classified information has come under scrutiny in recent weeks.

In remarks ahead of the dinner, Trump thanked her hosts, saying it was "wonderful" to celebrate the Olympics and to "reaffirm our bonds of friendship and partnership."

She added that the purpose of the trip was also to "reaffirm our commitment to our maximum pressure campaign to ensure that the Korean Peninsula is denuclearized," saying the group would discuss their "joint values and strategic cooperation as partners and allies."

Trump will spend Saturday and Sunday in Pyeongchang cheering on US athletes, attending a variety of as-yet-unannounced sporting events. She will attend the closing ceremony with the delegation Sunday evening and return to the US on Monday morning.

"It's a great honor to be here in South Korea with the US delegation. We are very, very excited to attend the 2018 Winter Olympic Games to cheer for Team USA and to reaffirm our strong and enduring commitment with the people of the Republic of Korea. Thank you for the kind welcome. We are excited to be here and looking forward to several wonderful days," Trump told reporters upon her arrival at the airport.

Per a briefing from Blue House spokesperson Yoon Young-chan, the delegation spent their dinner discussing topics such as the "successful results of Olympic athletes of both countries, strengthening women's economic capabilities, the importance of work-family balance, and South Korean culture, such as K-Pop."

Trump told her hosts that she showed her children K-Pop, Korean pop music, and they have "dance parties every day," adding that her children will sing for President Moon in Korean next time they meet.

The group dined on "Korean food designed to be palatable for foreigners," per the Blue House, noting that it was "delicately prepared" to be kosher for Trump. The menu included lotus root and pear salad, bibimbap, and bean sprout soup. After the meal, the delegation listened to a short concert featuring traditional Korean musical instruments.

Trump, who has a portfolio in the West Wing that includes women's economic empowerment, workforce development and tax reform, also worked with the International Olympic Committee and the city of Los Angeles to bring the 2028 Summer Olympic Games to Los Angeles, the first Summer Olympics to be hosted in the United States since Atlanta in 1996.

She has previously traveled abroad with her father's administration and represented the US abroad on her own, including trips to Germany, India and Japan.