It Was a Suspected ‘Birth Tourism’ Site. Then Came Late-Night Screams. 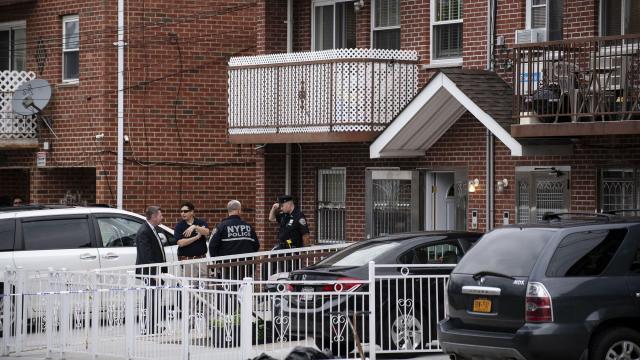 NEW YORK — Many neighbors had long been suspicious about the red brick town house in Queens.

Bryan Kim, 19, said he had seen pregnant women showing up at the home.

Sheng Long Peng, 70, said he had often seen the owner of the home arrive in his car with groups of pregnant women.

“They would arrive as much as twice a week,” she said.

By the time Kayla Cho, another neighbor, woke up shortly after 3:30 a.m. Friday to the sound of high-pitched screaming coming from the home, followed by cries for help, the questions about the mysterious residence had taken a violent turn.

When officers arrived at the house in the Flushing neighborhood, they found three infants and two adults had been stabbed by an employee who then cut her own wrist, according to police.

Law enforcement officials said the employee was Yu Fen Wang, 52, who was unconscious when officers arrived at the scene. She regained consciousness after officers applied a tourniquet to stop the bleeding, and was taken into custody. She is undergoing a psychiatric evaluation.

At the home where the stabbings occurred, officials said they found cribs for 11 children and believe that nine babies were present at the time of the attack. Two knives were recovered at the scene, the police said.

The infants who were stabbed were 13, 22 and 33 days old, according to a law enforcement official, who spoke on the condition of anonymity because of the ongoing investigation. An official offered conflicting accounts of one of the children earlier in the day.

As of Friday afternoon, the three infants, two girls and a boy, were in critical condition; one of the girls suffered more serious injuries than the others, said Juanita Holmes, assistant chief in the Police Department’s Patrol Borough Queens North.

Officials do not know if the mothers will take them back home in what appeared to be a “maternity tourism” or “birth tourism” operation. Once U.S. citizen children turn 21 they can sponsor a parent for a green card.

Maternity tourism is a small but persistent phenomenon and is particularly prevalent in California, where in 2015 federal agents raided more than 30 locations that they said were part of the industry. Typically, “birth tourists” are people with sufficient money to travel from foreign countries to give birth in the United States. The parents and their infants then return to their home country.

“If you’re born here, then you don’t have to worry about ever having illegal status,” said Angela Maria Kelley, an immigration adviser for the Open Society Foundations, which promotes democracy and human rights around the world.

Many facilities that operate as a place for foreign-born women to give birth register as day care centers because it is less likely to raise questions, said Mingli Chen, an immigration lawyer. Chen estimates that half these operations are legally registered but as day cares. They do that so “they don’t have to worry as much about government inspection,” he said.

The home in Flushing was not registered as a licensed or regulated child care program, according to the New York State Office of Children and Family Services. But even as the facility operated under the regulatory radar, its activities had not gone unnoticed by residents.

According to the New York City Department of Buildings, the residence began to garner complaints from neighbors about the owners’ use of the space in 2016, after being purchased by Meiying Gao and Xuexin Lin. In August, neighbors registered three complaints: first, that the neighbors suspected that the residents were doing construction without necessary permits; then that they seemed to have converted the basement into an apartment and were developing multiple rooms on the second floor; and, finally, that the second floor looked like it had been converted into an apartment. In November, a neighbor complained that the home was being used like a hotel.

But inspectors responding to the complaints were not able to gain access to the residence, according to the Buildings Department.

A phone call Friday to a number associated with Xuexin Lin was answered by a man who said “no comment” and hung up.

According to the law enforcement official, investigators did not know before Friday that the home in Flushing appeared to be a maternity tourism site. The official also said neighborhood residents described other sites being used for the same purpose, but that those reports had not been confirmed. “There are people in the neighborhood who didn’t seem all that shocked,” he said.

Pauline Yip, 65, another neighbor, said she often saw pregnant women taking strolls around the residence in the afternoon. “I thought to myself, this must be a birthing center, but I didn’t know,” she said in Chinese.

Though now suspected of being an illegal “maternity tourism” or “birth tourism” operation, some officials also suggested that the home may have also served as a maternity facility for Asian women who are in the United States legally but have no relatives to help them.

City Council member Peter Koo, who represents the neighborhood, said it was a Chinese and Korean tradition for women to rest and be cared for a month after they give birth. When family is not available, often in immigrant communities, businesses may fill the caretaker role.

“If they don’t have family they rely on outside support,” Koo said, adding that he’s “not sure that’s what this place did.”