Dispatches from Election Day (and night) in the Triangle

After millions of dollars, thousands of blaring television ads and countless visits by presidential candidates and their surrogates, North Carolina voters will decide who gets the state's electoral votes for president, along with the winners of hundreds of other statewide and local contests Tuesday.

Of the state's 6.9 million registered voters, more than 3 million have already voted. Election observers expect another 1.5 million to 2 million will cast their ballots on Election Day.

See below for updates from around the Triangle as WRAL covers Election Day:

11:20 p.m.: State Board of Elections officials said Durham County hasn't yet uploaded 93,000 of its early votes, which could swing some tight races.

11:10 p.m.: Donald Trump has captured North Carolina's 15 votes in his race for the White House.

8:35 p.m.: Donald Trump has overtaken Hillary Clinton in the presidential race in North Carolina as votes continue to be counted.

8:20 p.m.: Hillary Clinton and Roy Cooper hold early leads in the presidential and gubernatorial races in North Carolina, but plenty of votes are yet to be counted. So, be prepared for a long night.

7:30 p.m.: Most polls have closed in North Carolina, and county elections officials now begin the task of tabulating votes.

7:15 p.m.: Superior Court Judge Donald Stephens has deferred to the State Board of Elections' decision to extend voting times at eight Durham County precincts and won't grant Democracy North Carolina's request to extend voting at the other 49 precincts across the county.

7 p.m.: State Board of Elections votes to extend voting at two Durham precincts (Bethesda Ruritan Club and Cole Mill Road Church of Christ) until 8:30 p.m. and extend voting at six other precincts by 20 to 45 minutes, depending on how long they were disrupted during the day by the software problems or a lack of voter authorization forms. The Durham County Board of Elections had requested that all eight precincts stay open until 9 p.m.

The state board also extended voting in one Columbus County precinct by 30 minutes.

5:10 p.m.: Democracy North Carolina is seeking a court order requiring all Durham County polling sites to remain open until 9 p.m. because of problems processing voters in a handful of precincts.

5 p.m.: State Board of Elections general counsel Josh Lawson has clarified the problem with Durham County's electronic check-in system for voters. The system incorrectly indicated that scores of people who showed up to vote Tuesday morning had already voted, so the county switched to paper logs to manually check in voters.

Lawson told The Associated Press that about two dozen other counties using the same software hadn't reported problems and that Durham County officials might have failed to clear out caches of votes cast during the primaries.

4:30 p.m.: The NAACP and the state Republican Party have both overreacted to the Durham County Board of Elections' request to extend voting at one precinct, stating voting would go until 9 p.m. countywide.

"We have not yet seen any evidence that would justify extending voting hours for the entirety of Durham County due to a brief interruption in one of their 57 precincts," Thomas Stark, general counsel for the state GOP, said in a statement. "By law, an extension in voting hours would require votes cast during the extension be done by provisional ballot, and whether those provisional ballots would be counted are subject to post-election legal proceedings. We do not want any voter to be disenfranchised by relying on a provisional ballot cast under the false expectation their ballot will automatically be counted."

"We need every voter to vote," state NAACP President Rev. William Barber said in a statement. "We urge all North Carolina voters to stay at the polls until they have voted. Do not be deterred or discouraged. We will fight the legal battles; you have to fight the battle against discouragement."

3:15 p.m.: The Durham County Board of Elections has asked state elections officials to allow the Bethesda Ruritan Club polling location to remain open until 9 p.m. to give people turned away Tuesday morning when the site ran out of authorization forms and had to close for 90 minutes more time to return and cast votes. Although the NAACP and other groups asked for extensions at at least four other sites, Board of Elections Chairman William Brian said there is no evidence that voters were turned away elsewhere.

The State Board of Elections is expected to meet at 6 p.m. to go over Durham's request and requests from other counties to extend voting times.

2:15 p.m.: NAACP and other groups ask for extended voting times in Durham County because of earlier problems checking in voters. The groups have sent a letter to State Board of Elections members asking that polls in the county stay open until at least 8:30 p.m. to give people who were turned away Tuesday morning more time to return to the polls.

1:30 p.m.: ProPublica's Electionland service has reports of several dozen North Carolina voters who are having trouble voting after registering or updating their registrations through the state Department of Motor Vehicles. A federal judge ruled two weeks ago that the DMV hadn't properly transferred voter registration information in recent years to elections officials, and she ordered that people affected by that be allowed to cast provisional ballots that would later be counted if DMV records showed that they had tried to register through the agency.

11:57 a.m.: PUPPIES AT THE POLLS! The SPCA of Wake County is taking adoptable dogs to local polling places to help reduce stress.

Several voters got a chance to get some snuggles and love from puppies at Dillard Drive Elementary School in Raleigh. 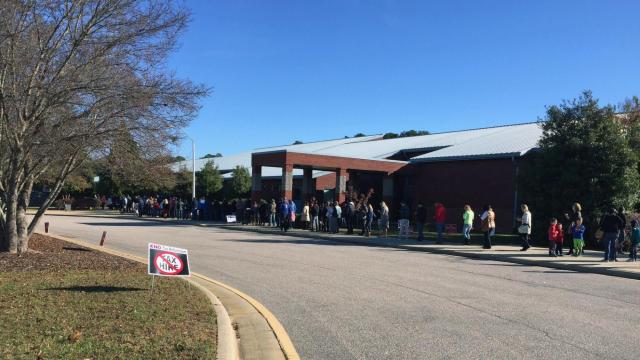 11:53 a.m.: Durham County says it will be using a paper check-in process throughout the county all day.

The Bethesda Precinct was forced to close for about 90 minutes Tuesday morning when it ran out of authorization to vote forms, but it reopened before noon, officials said.

"You waited until today, you got to get it done. So, I mean, staying at home isn't an option in my book," she said. "The lines aren't that bad, so get out and vote."

10:33 a.m.: Voters in Durham County will likely be at their polling places longer than normal because the county has switched to a manual, paper-based check-in process after computer problems were reported at several precincts.

"We are asking voters to be patient with us. It's like going back in time a little bit," she said.

9:50 a.m.: Get a closer look at the lines at polling places both in North Carolina and across the country. In Raleigh, the wait at Dillard Drive Elementary School is still between 45 minutes and an hour.

9:25 a.m.: Lines are long across many of the polling places in the Triangle. At Dillard Drive Elementary School in Raleigh, voters were waiting about 45 minutes shortly after 9 a.m., according to WRAL reporter Mikaya Thurmond. 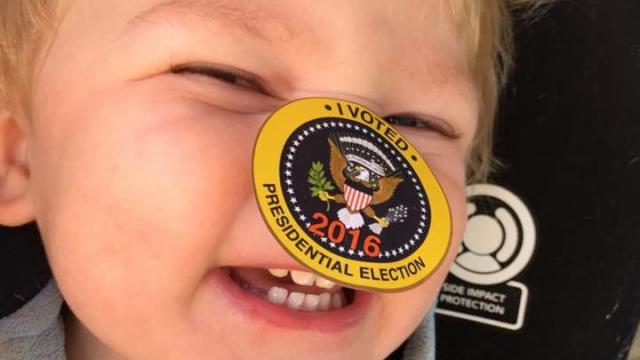 8:45 a.m.: Donald Trump's eldest son says that his family will "respect the outcome" of a "fair election."

Donald Trump, Jr. told CNN's New Day Tuesday that he thinks his father "will remain involved somewhat" if he loses the election. He said he hopes that the energy surrounding his father's campaign "goes back to the people we are trying to fight for, the people who haven't had a voice in a long time."

8:40 a.m.: Women across the United States are wearing pantsuits Tuesday in a show of support for Hillary Clinton.

Many were inspired by a Facebook group called Pantsuit Nation that has more than 2 million members. Some are also wearing white in honor of the suffragists who wore white when they fought for women's voting rights in the early 1900s.

8:00 a.m.: Durham County said its polling places are having technical problems that could slow down voting.

The county said on Twitter there was a "minor glitch" in the electronic check-in system, so workers are using manual poll books to verify voter registration.

@Ljbartel3 minor glitch with our electronic check-in system so we are using our manual poll books to verify voter registration.

6:30 a.m.: Polls around North Carolina opened Tuesday morning and will remain open until 7:30 p.m. Voters lined up early in Raleigh for their turn to cast a ballot.

NEW: Polls haven't opened yet & the line is already wrapping around the building at Pullen Community Center in Raleigh @WRAL #WRAL pic.twitter.com/X0CEa2wkJS

Here are the answers to last-minute questions you may have as the campaigns wrap up:

Where and when can I vote?

During record early voting, some 'just want to get it over with'
Unlike during the early voting period, there is no same-day registration on Election Day, so voters must be registered in advance in order to vote.

Do I need photo ID?

The voter ID law that was in effect for the primaries was overturned this summer.

The vast majority of voters will just need to state their name and address when they go to the polls.

What happens if I'm in line when the polls close?

Can I bring my phone to vote?

You can bring your phone to look at reference materials such as sample ballots, but talking on the phone and texting aren't allowed. Also, photos are largely banned inside voting areas, and it's illegal to take a picture of your ballot, so no "selfies" in the voting booth.

Hey, I want to write in my mother's name for president. Will she get a vote?

Speaking of president, how many votes does it take to win an electoral vote?

Nationwide, a candidate needs 270 electoral votes to win the presidency.

I've been so caught up in the presidential race, what else is on the ballot?

Each North Carolina voter will have a say in the race for U.S. Senate and one of the 13 U.S. House races on the ballot.

Voters will also choose members of the state House and state Senate. Although Republicans aren't expected to lose control of either chamber, if Democrats make inroads in suburban areas like those surrounding Raleigh, the GOP could loose its veto-proof super-majority.

A hotly contested Supreme Court race leads the roster of judicial contests on the ballot. There are also a myriad of local contests for county commissioners, school boards and the like.

If you're still trying to make up your mind, those in the WRAL News viewing area can use the My Ballot tool to read about the candidates in their own words.

Give me a piece of trivia that I can use if I strike up a conversation while waiting to vote.

Four presidents have lost the national popular vote but won the electoral college. The most recent was George W. Bush in 2000. The other three all came in the 19th century: John Quincy Adams, Rutherford B. Hayes and Grover Cleveland.