'It's really close': How the Amazon rainforest could self-destruct

As fires rage across the Amazon, a growing number of scientists are raising the alarm about a nightmare scenario that could see much of the world’s largest rainforest erased from the Earth.

Climate change, along with the fires and other man-made forces, appear on the verge of triggering a significant change in the Amazon’s weather system.

No one knows for sure whether and when this might happen, though some scientists who study the Amazon ecosystem call it imminent. If it does happen, a body of research suggests, the Amazon as a whole would cross a tipping point and begin to self-destruct — a process of self-perpetuating deforestation known as dieback.

If that is left unchecked, half or more of the rainforest could erode into savanna, according to some estimates, and then the rainforest, which has long absorbed the world’s greenhouse gases, could instead begin to emit them. 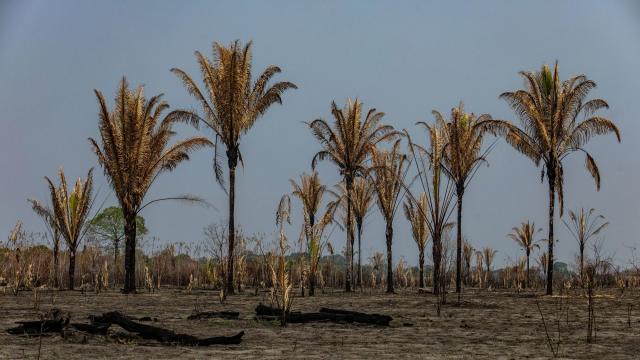 The Amazon’s plant life stores an estimated 100 billion tons of carbon. By comparison, every coal plant worldwide combined emitted 15 billion tons of carbon in 2017. So even if only a small proportion of the trees destroyed by large-scale deforestation burn, this longtime buffer against climate change could instead become a driver of it.

A continentwide transformation remains theoretical, and is still debated by scientists. But some believe that the Amazon could pass this tipping point soon, or may have already.

Asked for a best guess as to when the Amazon might cross that threshold, Thomas Lovejoy, a prominent environmental scientist, said that he and another scientist based in Brazil, Carlos Nobre, had independently arrived at the same estimate: 20% to 25% deforestation.

The number was a “hip shot,” Lovejoy said. And deforestation alone would not set off the cycle, but was shorthand for a more complex set of drivers.

The Brazilian government’s own estimate for deforestation of the Amazon stands at 19.3%, though some scientists consider this an undercount. 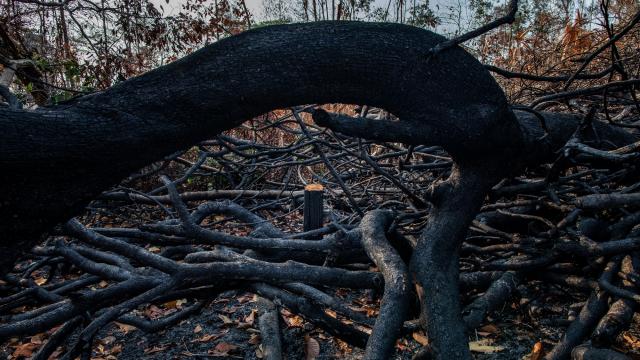 A Threat Greater Than Fires

The world may one day look back and find the warnings of ecological catastrophe embedded in research papers like one led by Jennifer Balch, an expert on fire.

Before Jair Bolsonaro became president of Brazil and oversaw this summer’s drastic increase in man-made fires in the Amazon rainforest, Balch and her colleagues set out to study what was then a rarer phenomenon.

They subjected plots of rainforest to a decade of small but repeated fires like those set by farmers, and they found something alarming. After enough cycles, even if the fires caused only moderate damage, if rainfall dropped, the trees began dying off in huge numbers.

The proportion of plant life that died after a fire suddenly spiked from 5% or 10% to 60% — sudden ecological death.

“We were able to document that, yes, the Amazon does have a tipping point,” Balch said of her team’s experiment, which is still going on. “And it can happen in a very short period of time.”

But what most disturbed the scientists was how this phenomenon seemed to fit into a larger cycle — one that implicated the rainforest as a whole.

That cycle is triggered by four forces, all but three of them man-made: roads, fires, invasive grasses and climate change.

We went to the moon. Why can't we solve climate change?

Roads, along with other forms of construction, fragment the rainforest, leaving each acre of plant life less able to endure a fire or resist its spread.

“As fragmentation is happening, you’re exposing a lot more forest edges,” Balch said. Those edges are more susceptible to drying out and other dangers.

Invasive grasses are one of those dangers, lingering at forest edges. Even a small fire can wipe out a rainforest’s undergrowth. Then grasses rush in, setting a blanket of dry, flammable plant life — and making the next fire far more damaging.

Climate change, by heating the Amazon, has made its dry seasons dryer and more hospitable to those grasses. As fires clear undergrowth, they carve out new, vulnerable forest edges and dry out forests, exacerbating the effects of climate change.

But what makes those forces so dangerous is not that they kill trees — it’s that they reduce rainfall.

In a healthy rainforest, plant life absorbs rainwater and groundwater, then sweats it back out into the atmosphere as moisture, seeding more rain. But once a section of rainforest has been thinned and fragmented, it gives off less moisture. Rainfall decreases, and the ground, of course, grows drier.

As a result, the next fire burns hotter and reaches deeper, causing more damage. Past a certain point, the forest no longer produces enough rain to survive.

“There’s already evidence that this can take place on phenomenal scales,” said Daniel Nepstad, a member of Balch’s team. “This is the imminent risk that could overshadow deforestation as a risk to this forest.”

World is woefully short of 2 degree goal for climate change, according to UN report

Dieback occurs when each of these elements — fires, invasive grasses, reduced rainfall — trigger a chain reaction, acting like the components of a combustion engine.

That cycle is supercharged at every stage by climate change. That means the sudden death that Balch’s team observed in a few isolated plots could play out across the rainforest as a whole.

A study led by Claudia Stickler, an environmental economist, projected that, under current rates of deforestation in the area around Brazil’s Belo Monte hydroelectric dam, rainfall will decline so precipitously that the dam will generate only 60% of its planned output.

“If you talk to indigenous groups, they all say that rainfall has changed,” Nepstad said. “This is, to me, what we need to be focused on.”

Could the Amazon Die?

There are two prevailing theories for what might happen past the Amazon’s tipping point.

One is that cycles of destruction will play out only where damage is most severe. Over time, each acre of rainforest that is dried out or destroyed would put neighboring areas at greater risk, potentially accelerating as it spreads. But dieback in one stretch need not necessarily put the entire rainforest at risk.

In the more dire scenario, enough disruptions could upend the Amazon’s weather system as a whole, eventually transforming the region from rainforest into savanna. 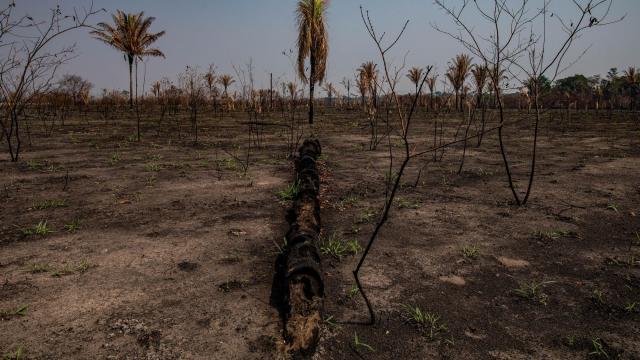 No one knows for sure whether this is possible, much less likely. But Lovejoy, the environmental scientist, underscored that rain and weather patterns are continental — and rely on a full, healthy Amazon.

“The models, and they’re pretty consistent,” he said, “suggest that the combination of fire and climate change and deforestation will weaken the hydrological cycle of the Amazon to the point where you just get insufficient rainfall in the south and the east, and then part of the central Amazon, to actually support a rainforest.”

In either scenario, the Amazon is thought to be approaching a point past which it will begin driving its own destruction. Scientists stress that the cycle, if caught early, could feasibly be stopped. But, once it begins, it would most likely only accelerate.

“It really makes no sense to figure out precisely where the tipping point is by tipping it,” Lovejoy said.

In the late 1990s, a team at the University of Exeter tested an idea that was considered somewhat contrarian.

Could the Amazon rainforest — one of the world’s greatest absorbers of greenhouse gases, and therefore buffers against climate change — become a driver of climate change instead?

They designed a computer simulation to test whether trees might someday die in sufficient numbers as to put more carbon into the atmosphere than the healthy trees sucked up.

The simulation spit out a year: 2050. That was when the rainforest would become a net emitter of greenhouse gasses. The findings were heavily debated.

As the Amazon burns, Europe seizes title of climate champion

As the warning signs of large-scale dieback have mounted, more scientists have come to see that scenario as a threat not just to the Amazon’s inhabitants and Brazil’s economy, but to a world already struggling to confront climate change.

“It’s a lot of carbon,” Lovejoy said. “It’s a really big number.” And it’s not just the Amazon.

“This is a global phenomenon,” said Balch, who has studied grasslands in the United States that could pose a similar threat. Nepstad said that he had found warning signs in the rainforests of Indonesia and the Democratic Republic of Congo.

Lovejoy compared this moment to the years before the onset of the Dust Bowl, in which mismanagement and drought turned American plains states into wastelands during the 1930s.

“Nobody really saw that coming,” he said. “The difference between then and now is we do see it coming and we know enough not to do it.”