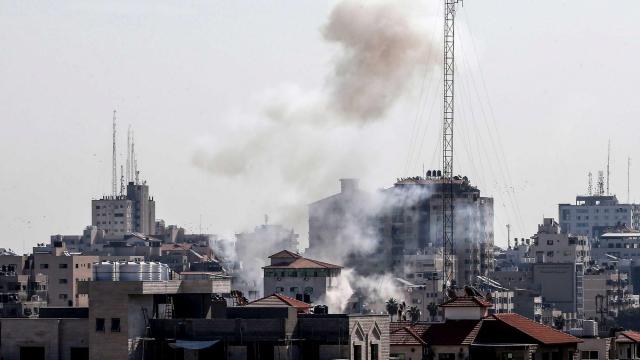 CNN — Twenty-six people, among them 17 militants and a seven-year-old boy, have been killed by Israeli air strikes in Gaza since fighting began Tuesday morning, according to Palestinian health officials.

On Wednesday, the leader of Islamic Jihad Ziad Nakhaleh responded laying out conditions for a ceasefire, calling for Israel to stop carrying out assassinations in Gaza and the West bank, among other things.

The armed wing of Islamic Jihad, the Quds Brigade, has since claimed twelve of the dead, including Baha Abu Al-Ata, the military leader of Islamic Jihad in Gaza, who was killed, along with his wife, in the assassination strike that began the escalation early Tuesday morning.

In addition, the armed wing of Fatah, the Aqsa Martyrs Brigade, has claimed three of the dead. The Salah al-Din Brigades, the military wing of the Popular Resistance Committees, also claimed the latest two deaths as members of their own organization. The Israel Defense Forces (IDF) says that at least some of those targeted were preparing to launch rockets.

Palestinian Health officials say a seven-year old boy was also among those killed.

About 250 rockets have been launched from Gaza since the fighting began, according to Israel's Defense Minister Naftali Bennett, in a video statement. Israel's Iron Dome aerial defense system continues to operate with an interception success rate of over 90%, the IDF says.

One person was lightly wounded Wednesday from shrapnel after a rocket fell in Ashkelon. Two people were lightly injured Tuesday after their car narrowly missed being hit by a rocket on the eastern outskirts of Ashdod.

Speaking from Beirut on Lebanon's al-Mayadeen TV on Wednesday, Nakhaleh the Islamic Jihad leader put forward three ceasefire requirements, calling them "the conditions of the people."

First, Israel had to stop carrying out assassinations inside Gaza and the West Bank, he said. Second, Israel had to stop shooting at demonstrators in what is known as the March of Return protest along the Gaza fence. And finally, Nakhaleh said Israel had to "abide by the understandings made in Cairo concerning the measures to break the siege on the Gaza Strip."

Israel has never officially acknowledged any ceasefire understandings with Gaza militant groups, though previous occasions when the truce has been restored after violent exchanges have coincided with measures to ease the blockade, such as relaxation of limits on Gaza fishermen, and the green-lighting of financial aid transfers from Qatar.

Nakhaleh said he was invited to Cairo, where Egypt and the United Nations are leading efforts to negotiate a ceasefire. But he said he refused the offer, though he remains in contact with officials in the Egyptian capital.

"We expect a response on this agreement," Nakhaleh said, "and if we agree, then will enter the ceasefire immediately."

'Our will is very great'

"I said yesterday that we are not bent on escalation, but that we would respond to every attack against us, and respond very sharply. Islamic Jihad would do well to understand this right now, instead of when it will be too late. I believe that Islamic Jihad is starting to internalize this message. They understand that we will continue to strike them without mercy. They understand that Israel is very strong and that our will is very great," Netanyahu said.

Underlining the clear focus of this campaign, the statement made no mention at all of Hamas, the militant group that runs the Gaza Strip. Usually, Israel's Prime Minister makes a point of stressing that he holds Hamas responsible for all militant activity in Gaza.

Analysts believe that by taking out Islamic Jihad leader Baha Abu Al-Ata, who Israel said was responsible for most, if not all, rocket attacks in recent months, Netanyahu hopes he can build on recent understandings reached with Hamas to strengthen the truce that has largely held since the last war in 2014.

A joint statement by Hamas and Islamic Jihad issued Wednesday spoke of operational coordination between the two groups in the face of the latest escalation, but as of mid-afternoon, Hamas had not taken part in the fighting the IDF said.

The United Nations says it is working urgently to de-escalate the situation and has also condemned the militants' use of rockets against Israel.

"The indiscriminate launching of rockets and mortars against population centres is absolutely unacceptable and must stop immediately. There can be no justification for any attacks against civilians," UN Special Coordinator Nickolay Mladenov said in a statement.

"The continuing escalation is very dangerous. It is yet another attempt to undermine the efforts to improve the dire socio-economic conditions in Gaza and prevent another devastating conflict."