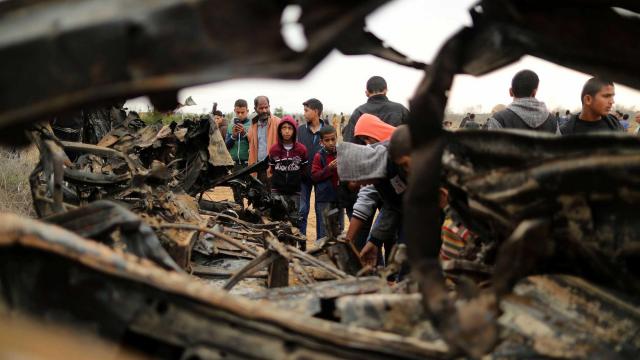 (CNN) — The Israeli army has defended a secret operation inside Gaza that left one of its officers dead, after it was forced to pull out its soldiers in an effort that ended in the the deaths of seven Palestinians, including a senior Hamas military commander.

The exchange, near the city of Khan Younis in the south of the Gaza strip, led to a barrage of rocket fire from Gaza towards Israel, and threatens to derail recent initiatives aimed at alleviating the humanitarian situation facing Gaza's two million residents.

Another officer was wounded.

Army chief Lt. Gen. Gadi Eisenkot said the officer had been killed in a "very meaningful operation to Israel's security," adding that the army owed him "more than we can say."

Hamas named a commander of its armed wing, the Qassam Brigades, Nour Baraka, as among the seven Palestinians killed.

Questioned on Israeli radio, IDF chief spokesman, Ronen Manelis, refused to give details of the IDF operation, but defended the decision to undertake it.

"Each of these operations is planned in the most serious manner," Manelis said. "It is an operation that takes time to plan. Commanding it directly are the Head of Intelligence and the Chief of General Staff. We are talking about an operation that was well planned right down to the smallest of details."

Hinting that the operation was part of a wider intelligence-gathering sweep, Manelis said, "It is the sort of thing that takes place every night, and in most instances remains under the media's radar."

This time, the soldiers had found themselves in a "very complicated situation," Manelis wrote on social media.

According to a statement from the Qassam Brigades, Israeli officers had entered southern Gaza in a civilian car, which was then discovered by Qassam militants led by commander Nour Baraka, who was killed along with another militant Mohammed Al-Qara, in the ensuing gun battle.

The Qassam statement said that Israeli warplanes then carried out airstrikes to provide cover while the soldiers escaped on an Israeli helicopter that had landed nearby to extract them.

Militants also said that the Israeli air-force had destroyed the civilian car used in the operation, and distributed photos of what they said was the burned out car Monday.

Reports of the Palestinian deaths were followed by sirens, indicating incoming rocket fire, sounding in Israeli communities close to Gaza.

Hamas accused Israel of hypocrisy. Musa Abu-Marzouq, a senior member of the Hamas Political Bureau, said in a statement on Monday morning, the Israeli military operation in Gaza "exposed the Israeli occupation's hypocritical behavior with the international community."

In total, the IDF said there had been 17 rockets launched from Gaza towards Israel. Three were intercepted by the Iron Dome aerial defense system. There were no reports of any casualties from the rocket barrage.

In anticipation of a possible escalation of hostilities, the Palestinian Ministry of Health said it was increasing the level of alertness at hospitals and among ambulance units in Gaza.

Hamas and Islamic Jihad, the two prominent militant groups in Gaza, announced that their fighters were also on high alert. Israel blamed Islamic Jihad for the last sharp escalation over Gaza two weeks ago, accusing the group of firing dozens of rockets at Israel at the instruction of Iran.

Sunday's escalation comes just days after Qatar sent $15 million into Gaza in an attempt to alleviate the humanitarian crisis in the coastal enclave and reduce tensions along the Gaza border, which has seen often violent clashes between Israeli security forces and Palestinian protesters.

Hamas hailed the money as a victory for the Islamist group, saying it would go to pay salaries of civil servants in Gaza, and help care for those wounded in the weekly clashes.

Netanyahu, who approved the transfer of the Qatari money through Israel into Gaza, had defended the cash transfer, saying in Paris on Sunday before the latest round of violence that he was trying to avoid an "unnecessary war."

Speaking to reporters, he said: "I am working in every direction to try to return the calm to the residents of the Gaza periphery and also to prevent a humanitarian crisis in Gaza. This is the decision that the [Israeli] security cabinet has made."

But Netanyahu had also struck a note of caution, suggesting he sees a long-term arrangement with Hamas in Gaza as impossible. "There is no diplomatic solution to Gaza," he said.

Hamas accused Israel of hypocrisy. Musa Abu-Marzouq, a senior member of the Hamas Political Bureau, said in a statement on Monday morning, the Israeli military operation in Gaza "exposed the Israeli occupation's hypocritical behavior with the international community."