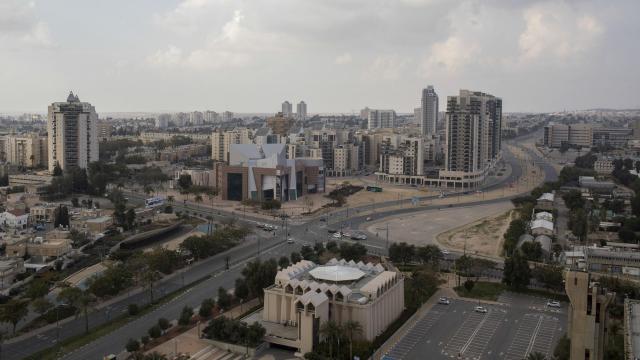 JERUSALEM — Israeli fighter jets attacked targets in the Gaza Strip on Wednesday, the military said, hours after a rocket fired overnight by militants in the territory struck a house in the southern Israeli city of Beersheba, a sharp escalation after months of simmering tensions along the Israel-Gaza border.

The residents of the house — a woman and her three young children — were treated for shock, according to the Israeli emergency services, and the Israeli military said a second rocket fell into the sea after it was fired overnight toward the crowded coastal area of central Israel.

The Israeli military said it had struck 20 targets in the Gaza Strip in response, including Hamas sites, but Hamas and Islamic Jihad, the other main militant group in Gaza, issued a joint statement soon after the first Israeli strikes distancing themselves from the rocket fire against Israel.

It would be unusual for a smaller, rogue group to fire longer-range rockets that can reach the central coastal area and, in any case, Israeli officials said they held Hamas responsible for the attacks.

Hamas controls Gaza, and Lt. Col. Jonathan Conricus, a military spokesman, said only Hamas and Islamic Jihad possessed the midrange, locally produced rockets that were used overnight, “which narrows it down.”

Israel has fought three wars against Palestinian militant groups in Gaza over the last decade, with deadly and devastating consequences. The most recent was in 2014, a 50-day war in which thousands of rockets were fired out of Gaza at Israel and that ended only after widespread destruction to the territory.

Tensions have burst out in brief bouts of fierce, cross-border fighting at least twice in recent months, but international mediators were able to quickly restore the fragile cease-fire.

Prime Minister Benjamin Netanyahu of Israel held consultations later Wednesday with his top security officials at the headquarters of the military’s Gaza Division. “If these attacks do not stop, we will stop them,” he said. “Israel will take very strong action.”

Still, analysts on the two sides said that both Israel and Hamas would be reluctant to enter into a broader conflict at the moment.

“No one really wants to do it because we understand that the achievements are not going to be very impressive on the one hand,” said Giora Eiland, a retired Israeli general and former national security adviser, “and also Hamas is not interested in another cycle of violence because they suffer from many problems already and they do not want to bring their territory to another level of misery.”

Among the targets struck by Israel was a Hamas tunnel leading into Israeli territory, according to the military.

Israel also said it had targeted a squad of militants who were trying to launch more rockets into southern Israel. One Palestinian militant was killed, according to Gaza health officials, and three Palestinians were injured in earlier airstrikes on militant targets in Rafah, in southern Gaza.

The overnight exchange came after seven Palestinians were killed Friday by Israeli fire during a particularly stormy day of protests. Four of the dead had crossed the fence that separates Gaza from Israeli territory and tried to reach an army sniper’s post, and one was armed with a knife, according to Israeli forces at the scene.

In recent weeks, the Palestinians have also resumed flying incendiary balloons from Gaza, some rigged with small explosive devices and others designed to set fires in Israel.

The Israeli defense minister, Avigdor Lieberman, warned during a visit to the Gaza Division on Tuesday, “We have all come to the understanding that the situation as it is today cannot continue.”

Lieberman, who is known for taking a hard-line stance toward the Palestinians, said Israel had tried using peaceful means to reduce tensions in the area, which have risen since border protests began in late March, including cooperating with international mediation efforts to restore and stabilize the cease-fire that ended the war in 2014.

“We have exhausted all the options, all the possibilities,” he said. “Now is the time for decisions.” Husam Badran, a senior Hamas official, said in a statement that Lieberman’s threats “do not scare even Palestinian children.”

In the wake of the overnight rocket strike in Beersheba, Lieberman announced that Israel would close the border crossings between Israel and Gaza and restrict the fishing zone off the Gaza coast to 3 nautical miles.

Those measures came after Lieberman said he was halting transfers of fuel from Israel into the Gaza Strip in response to the violent protests Friday. The transfers had been a first sign of progress after weeks of intensive efforts by Egypt and the United Nations to mediate a stable cease-fire between Israel and Hamas.

Hamas has been orchestrating weekly demonstrations along the Israeli border for the past six months to protest the blockade of the impoverished Palestinian territory.

The protests, which Palestinians call “The Great Return March,” are intended to highlight Palestinian demands to return to lands that became Israel and to draw attention to the tight restrictions on the territory Israel has imposed, with Egyptian help.

Since the protests began, about 200 Palestinians have been killed by Israeli fire, according to the Gaza Health Ministry. Israel says it is responding to prevent breaches of the fence in violation of its sovereignty and to protect Israeli civilians living near the border. One Israeli soldier has been killed, by sniper fire from Gaza. Palestinians and human rights groups have accused Israel of a heavy-handed approach to the protests that has led to the deaths of many unarmed civilians.

Nonetheless, the overnight rocket fire came as a surprise, coming soon after a delegation of senior Egyptian intelligence officials arrived in Gaza for meetings with Hamas officials to continue discussions toward reaching a truce with Israel and reconciliation between Hamas and its rival, the Palestinian Authority, in the West Bank.

The main Gaza factions suggested in their joint statement that the rocket fire was an attempt to sabotage the Egyptian mediation effort and described it as “irresponsible.” The Egyptian chief of intelligence postponed a visit to Gaza and the West Bank that had been scheduled for Thursday.

Sirens sounded in Beersheba around 3.40 a.m., sending residents running to safe rooms and shelters, but Israel’s Iron Dome aerial defense system appeared to have failed to identify the incoming rocket.

The military said the rocket had hit the children’s bedrooms, but their mother had saved them by rushing them down to a bomb shelter as the siren sounded, with seconds to spare. Television images showed the house severely damaged, with a hole where the rocket had torn through the roof.

Ruti Hai, a neighbor, told Israeli television that it was a “miracle” that everyone survived. She described the mother of the house that was struck, a single mother, as a “true hero.”