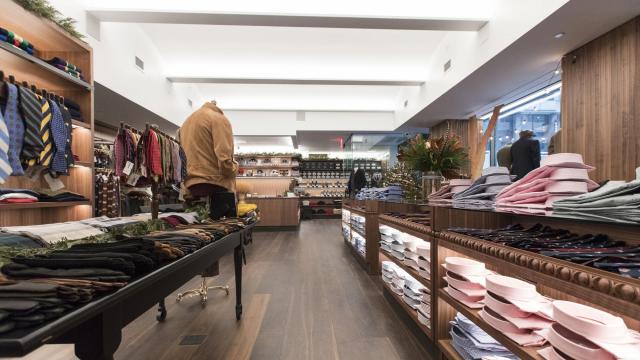 NEW YORK — Back in college, I used to walk by J. Press a couple of times a week, but it was invisible to me. You can’t see what you don’t know exists.

At the time, I owned a couple of sport coats but not a suit. I’d seen my father in a suit only on the day of my bar mitzvah and (maybe) my cousin’s wedding. I wore Polo and Hilfiger two sizes too big, jeans that could have sailed a yacht, Timberlands unlaced. I wore headphones the size of Big Macs and talked to no one. I knew every day I didn’t quite belong.

Over those four years, things began to change. I tried to play nice, tighten up, tuck in. Sandpaper off the burrs. It didn’t really work, but I’m not sure how much I wanted it to work. And even though I bought a Calvin Klein suit at Woodbury Common on severe discount, that was as far as I went.

J. Press remained a cipher. Once I began to see the windows, and what was in them, I was reminded largely of wealth I didn’t have, rooms I would never be allowed into. Rooms I had to convince myself weren’t worth craving.

Maybe that’s a small part of why, when I finally accepted tailored clothing into my life, my taste in suits skewed Italian. They had curve and swing and didn’t feel like prisons.

It would take years before I fully understood the panache on offer at J. Press, which began on Yale’s campus more than a century ago, and became a default outfitter of the northeastern elite. I never aspired to acceptance by that world, but I began to admire its ties, its scarves, its fabric choices (even if the cut and flow of those fabrics was a disappointment). These were American dandies, with a spirit I could recognize, if not quite embrace.

Here in New York, I’d pop into J. Press mostly to look, little doses of class tourism. As I’ve aged, I’ve crept slightly closer to its aesthetic, but only slightly.

Still, I had high hopes for its new store, just north of Grand Central Terminal. The stretch of 44th Street that runs from Avenue of the Americas to Vanderbilt captures both the elegance of New York as it once was and the reality that New York is no longer that way. There are the Harvard and Cornell clubs, the New York Yacht Club and the Algonquin, Brooks Brothers and Allen Edmonds. But also at least three huge empty storefronts.

This street is as close to a conceptual cul-de-sac as midtown Manhattan can manage, but also reflects the receding influence of a certain generation of the city’s elite.

J. Press perseveres, however. The new location is cozy and carefully segmented: suits and sport coats and pants on the back wall, sweaters and ties on tables in the middle, slightly fancier jackets and blazers in a small alcove on the left, and a modest made-to-measure setup in the rear.

No surprise, but the cut of the jackets was cylindrical, with little nuance. Not that Harris tweed ($895) is the gentlest of fabrics, but the rigidity was a challenge. I tried on a cheeky pair of wool pants in a black and white check ($330), but the legs were 1990s wide.

In the back alcove, I found a compromise: a tweed Golden Bear varsity jacket ($595) that had aristocratic zest. One of the salesclerks walked by and offered an assist: “It’s a tweed jacket without looking like you’re an extra on ‘Downton Abbey.'”

This style, though, is best consumed in tiny, accessory-size doses: knit ties in bold colors ($89) or something from the circular racks of needlepoint belts, maybe in your Ivy League motif of choice ($165, PTSD optional). The array of trad college scarves ($98) have some gems: Try the hypermodern colorblocking of the Yale School of Management.

I admired what seemed like an out-of-season raw silk regimental tie with pastel pink, blue and yellow stripes ($79), probably the only item in the store that could go with the pink velvet Gucci slippers I’ve been coveting for a year and not had the courage to buy.

Such fabrics — such garments, as Lil Uzi Vert might say — were in short supply, though. Instead, I spotted corduroy. The return of corduroy is always unwelcome. It bespeaks a dowdy period to come. To this day, I’ve never met a pair of flattering corduroy pants (though I have a lovely forest green jacket). I did see a yellow pair here, but to be fair, I’m skipping the coming regatta season, so it was tough to feel at home.

Before I left the store and stepped back out into the December icebox, I took a look at some lovely British wool knit caps in bold colors ($58), but got distracted by something very unlikely: a corduroy baseball cap. It was floppy and unstructured, a dad hat made for actual dads. The way it sagged suggested wealth around long enough to have heated, and then settled, like the earth itself.

I was trying on the green one when the clerk informed me there was a pink one as well. I couldn’t decide between the two, so I got both.

The Look: Old money, which is to say the generation that considered the East 50s posh. Prep accessorizing, for actual preps or for SoundCloud rappers claiming imaginary sets.

The Vibe: Affable help from exquisitely turned-out gentlemen to assist you in determining if northeastern aristocratic style is for you.

The Cost: More reasonable than the Italians.