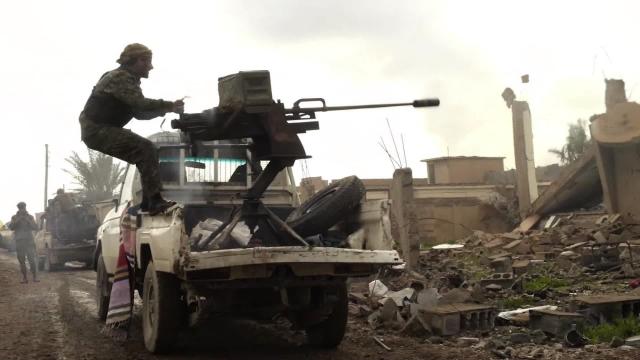 The SDF launched an offensive last weekend to oust ISIS from its last enclave in Syria, in the small town of Baghouz Al-Fawqani in the country's east.

Its fighters have the terror group's final foothold surrounded but have slowed their advance to avoid harming thousands of civilians who are being held by ISIS as human shields, Commander Chia Kobani, head of operations for the SDF, told a press briefing.

The SDF is also acting with care in order to liberate prisoners held by ISIS, he said, adding that they had been able to free 10 captives in recent days.

"Some may be surprised that Baghouz has not yet fallen. But the firing has stopped. The area is within range of our fire. But we are moving cautiously because there are thousands of civilians being held as human shields," Kobani said.

At its height, ISIS controlled an area the size of Great Britain and ruled over 10 million people.

Kobani said the SDF's efforts would not end with the removal of ISIS' military presence on the ground.

"We will move to the next stage to the stage of combating ISIS and its sleeper cells and its remnants in the area in order to secure the safety of this region and the lives of people," he said.

Kobani did not give a breakdown of how many fighters and civilians were believed still to be in the town.

Before the final offensive started, SDF officials estimated that 1,500 civilians and 500 ISIS fighters remained but as the assault got under way it became clear that the actual number was much higher. The militants include some of the most battle-hardened, ruthless and experienced personnel remaining in ISIS.

Some of those being used as human shields are the wives and children of those ISIS fighters.

Meanwhile, the United States continues to face criticism for its plan to pull US troops out of Syria, a move that shocked allies when it was announced in December by President Donald Trump.

Speaking at the Munich Security Conference in Germany on Saturday, German Chancellor Angela Merkel warned that the US decision risked boosting Russia and Iran's role in the region.

"Is it a good idea to immediately withdraw troops from Syria now, American troops that is? Or will it not strengthen Iran's hand and Russia's hand to influence the situation on the ground? That too is something we need to discuss," she said.

Shortly afterward, US Vice President Mike Pence told the conference -- an annual gathering of heads of state, defense ministers and security experts -- that the decision to withdraw US troops from Syria was "a change in tactics not a change in mission."

"The United States will keep a strong presence in the region. We recognize it will not be enough to simply reclaim the territory of the caliphate," he said.

"As we enter this new phase, the United States will continue to work with all of our allies to hunt down the remnants of ISIS wherever and whenever they rear their ugly head."

The US commander who has been leading the war against ISIS told CNN on Friday that he disagreed with Trump's decision to pull troops out of Syria and warned that the terror group was far from defeated.

Joseph Votel, the top American general in the Middle East, also said that the US-backed forces on the ground in Syria were not ready to handle the threat of ISIS on their own.

"It would not have been my military advice at that particular time ... I would not have made that suggestion, frankly," Votel said of the troop withdrawal announcement.

The head of Britain's Secret Intelligence Service (SIS) -- better known as MI6 -- also warned Friday that even as ISIS nears territorial defeat in Syria, it has "managed to morph and reconstitute ... in a more traditional, asymmetric threat."

Speaking on the sidelines of the Munich conference in a rare on-the-record meeting with journalists, Alex Younger, known as 'C' or Chief in Britain's foreign intelligence service, added that a resurgence of al Qaeda in Syria's ungoverned areas also posed a threat.

Correction: This story has been updated to correct the amount of territory that ISIS holds in Syria. It controls about half a square kilometer.