Is your child ready for overnight summer camp? 4 things to consider from a summer camp director

A winter storm may be in the forecast, but lots of families have their sights set on summer plans, lining up camps for their kids. Indeed, some summer weeks at the YMCA of the Triangle's Camp Kanata in northern Wake County began filling up before Thanksgiving.

"We had weeks filled earlier this year than ever before," said Shane Brown, Kanata's director.

But that doesn't mean parents and kids, with dreams of a week or more away this summer, are out of luck. There are still some slots available for week-long camps at Kanata, along with the YMCA's other camps, including the popular Camp Sea Gull and Camp Seafarer, and other overnight camps across North Carolina and the country. (Our North Carolina summer camp guide has information about some overnight camps).

But how do you know if your child is ready for overnight camp? I checked in with Brown, a father of two kids of his own, to learn more about the signs that a child may be ready and what parents should consider.

Don't worry about their age

It seems like many of my own kids' friends started going to camp as young as age 6. Sea Gull and Seafarer, for instance, both offer Starter Camps for younger children.

But Brown said that parents shouldn't be focused on what age other kids are starting camp. There is no right age to begin, he said.

Kids ages 7 to 15 typically spend a week at Kanata's 150 acres, swimming, kayaking, playing sports and exploring nature. The "sweet spot," however, is ages 9 to 12.

"Many of our first-time campers start at age 8, 9 or 10," Brown said."... I went to YMCA camp for the first time when I was 14. There is no rule that you have to start at a certain age. It has to do with when your children might seem like they are ready."

Parents need to be sure that they are ready to let go of the reins for a bit and put their trust in camp staffers. At Kanata, for instance, parents don't have constant access to their kids. They can check online for pictures of their kids, which are posted nightly; email them; and call camp staff to check in. Kids can only send letters home by snail mail.

"Part of the camp experience is a child building that confidence and independence away from their parents," Brown said.

But, he admitted - and understands as a parent himself: "It's a big deal to let your children go." 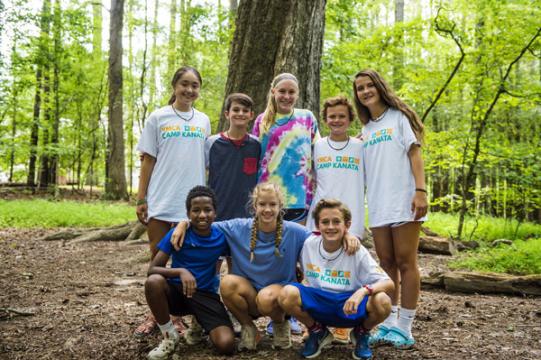 Listen to your kids

Are they starting to ask questions about summer camp? Have they heard about their friends going and want to do the same? Is there a friend they could go to camp with? Do they love the day camp experience and seem to be looking for something more? These kinds of conversations, often sparked by the child themselves, all are signs that they might just be ready.

Brown recommends having some conversations with them about the idea of summer camp. Show them websites and camp videos. See how they react, listen to them and answer questions, he said.

"We get so many campers that come from that Y Guide program," Brown said.

Visit the camp, talk to the staff

Of course, parents will want to investigate camps to make sure they are the right fit for their family. But Brown said these conversations also are a great way to alleviate a child's fears. He often talks to prospective campers and their families by phone or takes them on tours so they can learn more about what a week at Kanata is all about.

Kanata also will host an open house from 2 p.m. to 4:30 p.m., April 29. By then, it's likely slots for summer 2018 will be filled. Campers, who already are signed up for the summer, will mostly attend.

But Brown said the open house is open to anybody, including families who might be considering a camp in summer 2019. An open house is a great opportunity to learn more about overnight camp and get a child excited about the possibility.

A visit to a camp, especially one that might be across the state or across the country, isn't always feasible. But conversations by phone can help kids get excited about the idea and decide if it's something they'd like to do. 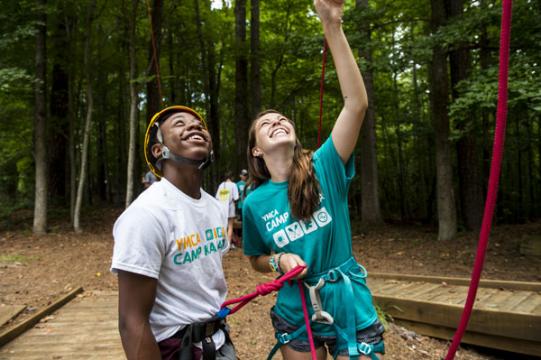 Don't push it, but be prepared

If kids are certain they have no interest in camp, find out what's causing their concerns.

If they are worried that they'll miss home, let them know that homesickness is completely normal. In fact, Kanata has staff who are trained just to help kids who are having a rough start. Brown often talks to parents and kids about the topic. For most kids, homesickness lasts just a day or two, he said.

For others, often those dealing with specific or generalized anxiety issues, overnight camp just might not be the right fit now.

"I would say not to force it," Brown said. "Camp should be fun and it should be something exciting and to look forward to."

But, if your child doesn't suffer from an underlying issue that is causing them anxiety, most kids' nerves may be easily overcome.

"Giving it a chance is worthwhile," Brown said. Knowing that many camps fill up quickly, Brown recommends that parents sign their kids up for camp now, once they've read up on its refund and wait list policies, and then have lots of discussions with them about the idea. Look at the camp website. Chat with the camp director. Take them to an open house, he said. Brown has seen many kids, who are skittish about the idea of overnight camp at first, change their mind once they get to open house.

If you sign up now to secure a spot, but it turns out it's not something your child really wants to do, you can always get a refund - as long as the camp's policy allows it. Many camps have long waiting lists of other children who are eager to grab your spot.

Overnight camp, Brown said, can be a great way for kids to build confidence and the tools required for healthy social skills and relationships. Kanata is device free, which means kids will be focused on real life instead of whatever is happening on the tiny screen in front of them.

"More and more, as we're connected to devices, it seems like it's increasingly difficult for people to connect one-on-one and face-to-face," Brown said. "We love helping children do that."

Camp Kanata's website has more information about its programs and offerings, which also include spring and fall weekend camps and summer day camps. Fun fact: More than 90 percent of Kanata's campers live within 45 minutes of the Wake County camp.

And, Brown said, about 10 percent of kids receive financial assistance so they can attend. If you think camp is too expensive for your family, find out what kind of help may be available.

For more information about other camps across the region, our NC Kids Camp Guide has details on summer and track-out camps across Raleigh, Durham, Cary, Chapel Hill and beyond.