A President Who Fans, Rather Than Douses, the Nation’s Racial Fires 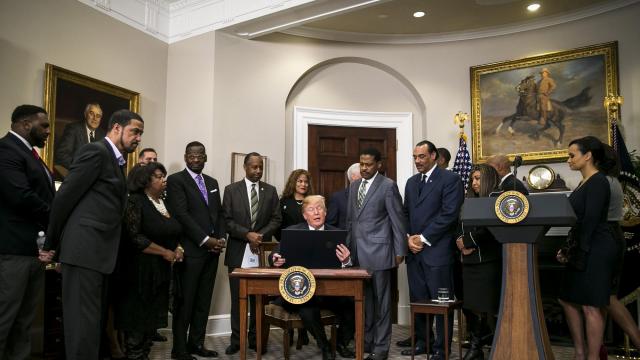 WASHINGTON — As he signed a proclamation marking the holiday next week honoring the Rev. Martin Luther King Jr., President Donald Trump on Friday recalled the civil rights leader’s message that “no matter what the color of our skin or the place of our birth, we are created equal by God.”

Then came the questions from reporters.

“Mr. President, are you a racist?”

He did not answer and instead headed for the door.

It is a question many were asking after the latest charged episode in a presidency that has played out along the nation’s racial fault lines from its beginning. Trump’s comment to lawmakers that the United States should accept more immigrants from places like Norway instead of from Haiti or “shithole countries” in Africa did not sound consistent with the notion that all people are equal no matter the place of their birth or the color of their skin.

If it were a one-time comment, an inadvertent insensitivity, it would still have stirred a firestorm. But Trump has said so many things on so many occasions that have rubbed the raw edges of race in America that they have raised the larger . A country tainted at its founding by slavery and struggling with that legacy ever since is now led by a chief executive who, intentionally or not, has fanned, rather than doused, the fires that divide white, black and brown.

The president’s approach to race has by many accounts damaged America’s standing in the world and complicated his foreign policy. At home, his words have at times emboldened what was once a political fringe and made it more acceptable to express thoughts that in recent decades had been deemed politically offensive. And he has put the Republican Party in the uncomfortable position of having to defend or denounce him as it heads into an already tough election year.

“Is the president racist? I would say unequivocally yes to that,” said George Yancy, a professor at Emory University and the author of “On Race: 34 Conversations in a Time of Crisis,” published last fall.

White supremacists agreed. Richard Spencer, the white nationalist leader, said Friday that conservatives defending Trump on Fox News should stop saying it was about economics and legal systems, rather than race. “It’s obviously all about race, and to their credit, liberals point out the obvious,” he said.

The Daily Stormer, a neo-Nazi website, likewise welcomed Trump’s comments. “This is encouraging and refreshing, as it indicates Trump is more or less on the same page as us with regards to race and immigration,” the site said.

The White House rejected assertions that Trump is a racist. “This president fights tirelessly for all Americans, regardless of race, religion, gender or background,” said Raj Shah, a White House spokesman. “Any suggestion otherwise is simply insulting and belies all the results he’s delivered for minorities throughout this country.”

Shah cited record-low unemployment among African-Americans — the culmination of a downward trend that began in 2011 under President Barack Obama — as well as policies intended to reduce crime and drugs and promote school choice in inner cities.

Trump’s aides and allies expressed frustration that his comments were being interpreted through a racial prism. He is an equal opportunity provocateur, they said, given to using strong and politically incorrect language to make larger points. In this case, they said, he was arguing that the United States should set priorities for who it admits based on merit and skills that would benefit the country.

“Apart from the vocabulary attributed to him, President Trump is right on target in his sentiment,” Robert Jeffress, the evangelical pastor of First Baptist Church of Dallas and a presidential adviser, told CBN News. “As individual Christians, we have a biblical responsibility to place the needs of others above our own, but as commander in chief, President Trump has the constitutional responsibility to place the interests of our nation above the needs of other countries.”

Trump tried to appeal to African-Americans during the 2016 presidential campaign by arguing that, since their neighborhoods were “war zones” and Democrats took them for granted, “what the hell do you have to lose” by giving him a chance. He ended up winning just 8 percent of the African-American vote, and polls show that his already meager support among blacks has fallen by half since he took office. Trump’s history of racially inflammatory episodes traces back to his first days in the public eye. As a young real estate businessman raised in New York City and working with his father, Trump and the family firm were sued by the Justice Department in 1973 for discriminating against black applicants for rental apartments. He eventually signed a consent decree requiring him to desegregate his properties, although he claimed victory because it included no financial penalty.

As he became more of a public figure, Trump waded into racially charged controversies that periodically erupted in New York. After five Latino and African-American teenagers were charged with beating and raping a jogger in Central Park in 1989, he spent $85,000 to take out full-page ads in four New York newspapers calling for the death penalty.

The Central Park Five, as they were called, were later exonerated and were paid a $41 million settlement, but Trump has never accepted that outcome. As late as 2016, he insisted that they were still guilty and that the settlement was “outrageous.”

While Obama was in office, Trump was a leader of the birther movement, promoting the conspiracy theory that Obama had been born in Kenya, a false claim he did not abandon until 2016. During the campaign, Trump also generated criticism for describing unauthorized immigrants from Mexico as “rapists”; proposing to ban all Muslims from entering the nation; and being slow to disavow the support of David Duke, the former Ku Klux Klansman.

Since taking office, he has asserted that there were good people on both sides of a white supremacist rally and counterprotest in Charlottesville, Virginia, and repeatedly lashed out at black football players he deemed insufficiently patriotic for kneeling during the national anthem to protest racial injustice.

In a closed-door meeting on immigration with advisers in June, described last month in The New York Times, Trump complained that Haitians “all have AIDS” and that Nigerians who visit would never want to “go back to their huts” in Africa.

People close to Trump have long insisted that he is not racist and that his often crude language is applied across the board. Omarosa Manigault Newman, a former “Apprentice” contestant who was one of the few African-Americans on his senior staff until her departure last month, bemoaned various racially charged moments during his administration but insisted that “he is not a racist.” “Yes, I will acknowledge many of the exchanges, particularly in the last six months, have been racially charged,” she said in an interview with ABC News. “Do we then just stop and label him as a racist? No.”

Katrina Pierson, a spokeswoman for Trump’s campaign who now works for America First Action, a pro-Trump super PAC, said that as an African-American she found the president to be colorblind and empowering. The criticism of his words and actions, she said, owed more to partisanship.

“If you’re on the left, then everything he says or does, you’re going to find a racist or sexist tone to it, period,” she said Friday. “Even if you’re on the right but you’re an establishment person that is used to politically correct way of doing things, you might cringe when he says something that’s not politically correct. He says things people say at their dinner table. He’s just very bold and very honest,and a lot of people have been conditioned not to deal with people that way.”

She said critics forgot that when he was in business, he supported the Rev. Jesse L. Jackson’s Rainbow/PUSH Coalition. Indeed, Trump donated free office space for Jackson’s civil rights group.

But Jackson was among those who spoke out Friday against Trump. “He speaks like a racist,” Jackson said. “He conjures up those fears. But to categorize him by a name does not quite address the issue.” Jackson concluded, “A misinformed man with power is a weapon of mass destruction.”

Critics and scholars said Trump’s remarks reflected a long-standing stereotyping of minorities and immigrants and have given permission to others who used to hide such views.

“I’m pretty sure that many of the same people he insults and degrades maintain the buildings, sew the clothes, and are at the backbone of the businesses that he and his family depend on for their wealth,” said Marcia Chatelain, an associate professor of history and African-American studies at Georgetown University.

The event marking the King holiday that Trump held Friday was planned long before the uproar over the president’s latest comments, but it put the stigma that his words have caused in stark relief.

“When reporters shout out to Mr. Trump ‘are you a racist’ at an event to honor the legacy of Dr. Martin Luther King, something is amiss,” said Ron Christie, who wrote a book about his time as an African-American adviser in President George W. Bush’s White House. “That the president needs to confront questions of racism or bias tells you that this isn’t fake news but a painful reality he must immediately confront.” Trump made no mention of the anger touched off by reports of his remarks when he signed the holiday proclamation. He was accompanied by Isaac Newton Farris Jr., King’s nephew, and Ben Carson, the secretary of housing and urban development and the most prominent African-American in the Trump administration.

He stared down at his prepared statement and stuck tightly to it, calling King an “American hero” who “opened the eyes and lifted the conscience of our nation.” Carson and Farris offered brief comments that likewise did not address the controversy.

As Farris left the White House, he paused to respond to the question that Trump did not. “I think President Trump is racially ignorant and racially uninformed,” he told CNN. “But I don’t think he is a racist in the traditional sense.” Trump’s comments, he added, were “another example of him speaking without knowing the facts.”