Raleigh, N.C. — Hurricane Irma strengthened back into a Category 5 storm as it bade landfall in Cuba Friday night before making landfall in the Florida Keys and south Florida, according to the National Hurricane Center.

The current path projections show that Irma will make a sharp right turn into Florida early Sunday, west of Miami, before continuing slightly west, then north, and affecting the entire Florida peninsula and into Georgia.

The National Weather Service issued a hurricane warning and a storm surge watch for southern Florida and the Florida Keys. 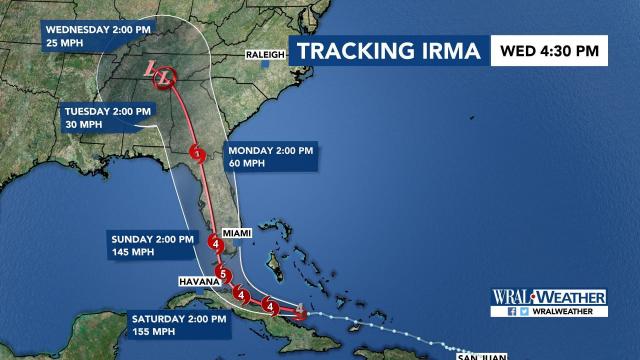 The latest forecast model from the National Hurricane Center showed that only the far western part of North Carolina remained in the storm's "cone of uncertainty," although the whole state will still likely see effects from the storm.

"There is extremely, extremely high confidence in this track now," Fishel said. "There is almost no spread in the ensembles, whatsoever.

"So, it does appear like the farther south and west you go across North Carolina, the worse the conditions will be, and from Raleigh and Fayetteville (to the) east, it doesn't look like the conditions will be all that terribly bad. There will be some impact, but certainly nothing like we would have had, had it taken a more easterly track."

On Friday, Mike Sprayberry, the state's emergency director, said preparations have been a little difficult due to the changes in Irma's forecast track.

"We will analyze the forecast track and then adjust our resources appropriately," he said. "Right now, we know there is still room for error because the storm is still days out."

During a news conference, Gov. Roy Cooper said things are looking better for North Carolina. The western part of the state could see flooding, landslides and power outages, he said.

"But we are not out of the clear and we can't let our guard down," he warned. "Even a glancing blow can cause damage from such a powerful storm."

After Hurricane Harvey dumped historic levels of rain in Texas, North Carolina sent several search and rescue crews to the state to provide aid. Cooper said the majority of those teams have already returned home.

A state of emergency is currently in effect for North Carolina.

"We know that resources are going to be strained. The good thing is that North Carolina knows what to do when these storms come. We'll be ready," he said.

Irma comes less than one year after Hurricane Mathew left behind devastation in several North Carolina towns, and many people are still displaced as a result of that storm. Cooper said organizations will need to work to ensure those people have a safe place to go when Irma arrives.

Cumberland County experienced flooding during Hurricane Matthew and about 1,800 residents had to be rescued. This time around, emergency officials are holding meetings earlier and including more detail in their plans before a storm hits.

"One of our lessons we learned from Matthew is just get started, get prepared more than a typical amount of days ahead, not wait and see what the storm is going to do. Just go ahead and get everything in line," said Cumberland County Emergency Management coordinator Gene Booth.

A team will be meeting nonstop to plan until they know what path Irma will take. A meeting on Thursday included first responders, Cumberland County Schools and the Parks and Recreation Department.

"It was a discussion on sheltering. What shelters would we want to open? All of our partners are already well ahead of the game," Booth said.

One of the most important things for officials is remembering what didn't work in 2016 and fixing it before Irma arrives.

"I think with Matthew, kind of Murphy's Law played. If something could go or if a generator could fail, it did, so we are insuring extra backups to teh backups," Booth said.

The U.S. Army Corps of Engineers said officials are making slow releases at Falls Sam and Jordan Dam ahead of the storm, although water levels at both lakes were below normal levels Wednesday.

Major airlines have hurricane policies in effect as the hurricane approaches. At least one flight from Raleigh-Durham International Airport to Miami was cancelled Thursday. Officials are recommending passengers check airlines ahead of time, even for flights to outside the hurricane's path.

"While it's not a sure thing, we need to take this very seriously and prepare," Maze said.