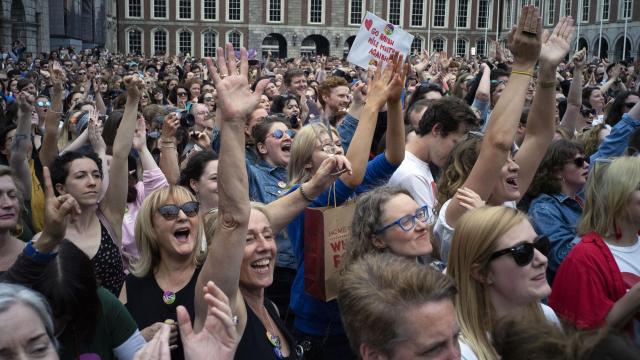 DUBLIN — Fighting off last-ditch resistance, Irish lawmakers overwhelmingly passed a bill introducing free and legal abortion to a nation that was long a bastion of staunchly conservative Catholicism, seven months after voters repealed a constitutional ban on abortion.

An often heated session of the Parliament’s lower house Wednesday had to be extended several times, as a small number of members — mainly independent conservatives — talked at length on dozens of amendments, almost all of which were voted down by large majorities. The bill’s opponents attempted to prolong the debate even further, which could have derailed the government’s plan to make abortion available in January.

Ultimately, the house approved the bill just before midnight Wednesday by a vote of 90 to 15, with 12 abstentions, and it moved Thursday to the upper house. Ivana Bacik, a Labour Party lawmaker in the upper house, said she thought it very likely that the bill would pass and become law before the holiday recess the week after next.

The bill would allow a woman to seek abortion for any reason up to the 12th week of pregnancy, and later in a case of fatal fetal abnormality or serious risk to a woman’s life or health. It includes a mandatory three-day waiting period after first consulting a doctor.

In May, 66 percent of voters supported a referendum to remove a near-total ban on abortion from Ireland’s Constitution. The ban had been enshrined in the constitution’s Eighth Amendment, approved by 67 percent of the electorate in 1983, when the Roman Catholic Church was still a dominant social and political force in Ireland.

This year’s abortion referendum was one of several milestones in a striking liberal shift in Irish society. Voters overwhelmingly approved same-sex marriage in 2015, the country has a gay prime minister, Leo Varadkar, and the government has taken steps to loosen the church’s still-firm grip on most grade school education.

In recent years, a number of scandals, including clerical sexual abuse and the institutional neglect and mistreatment of women and children, have gravely damaged the church’s moral stature in Ireland. Several legal and medical controversies also shook support for the abortion ban, notably the 2012 death of Savita Halappanavar, a 31-year-old dentist who died of sepsis after being denied an abortion to remove a nonviable fetus she was already miscarrying.

Speaking as the parliamentary debate came to a close Wednesday, the health minister, Simon Harris, said that the people had voted “no more” to such cases.

“I look forward to a time, not far away now, when we will be able to assure women experiencing crisis pregnancies that they will be looked after here at home, where they need not fear that they will be stigmatized for their choices or lack the support they and their families need from our health service,” he said.

In a statement released Thursday, Ireland’s Catholic bishops said: “Women’s lives, and the lives of their unborn children, are precious, valued and always deserving of protection. Any law which suggests otherwise would have no moral force. In good conscience it cannot be supported and would have to be resisted.”

Seeking to honor its pledge to make abortion available by Jan. 1, the government had opposed almost all amendments to the bill, from both anti-abortion lawmakers and those who considered the legislation too restrictive.

The key defeat for the anti-abortion caucus came when the house defeated an amendment that would have permitted health care providers with conscientious objections to refuse to refer women to others who would perform the procedure.

The bill recognizes the right of clinicians to refuse to perform abortions on moral grounds, but requires them to refer patients to others who are willing.

In their statement, the bishops protested that providers “cannot be forced either to participate in abortion or to refer patients to others for abortion.”

“Even what many people would have deemed to have been very reasonable legislative amendments seeking to provide women with information and to prohibit abortion on the grounds of sex, race or disability, have been rejected,” they said.

Under the proposed law, most abortions up to nine weeks of pregnancy would be conducted with pills prescribed and monitored by general practitioners. Beyond that time, women would have to go to hospital obstetrics departments.

Brendan Crowley, an anti-abortion doctor, said that many of his colleagues, including some who disagree with him on abortion, shared the view that a general practice was not the appropriate place to provide abortions. Many primary care doctors lack the necessary training, he said, and already operate with too few resources and too many patients.

“We accept the democratic vote in May,” Crowley said. “We accept this is happening and we are not trying to be obstructive. But the large proportion of GPs would prefer an external clinic setting for abortions.” But Mike Thompson, a leader of Start, a doctors’ group that favors abortion rights, said he believed that anti-abortion doctors had a political reason for wanting to limit abortion to specialized clinics.

“Our practices are generalist, people go there for everything, so you can’t really protest at them,” he said. “They would like abortions to be limited to big silos in places like Dublin because they can be blockaded and protested.”

While the government and medical organizations have no plans to publish lists of primary care doctors and obstetricians who have conscientious objections to abortion, Crowley said that he believed such lists would quickly emerge on social media.

“People will say, `I went to the doctor and he refused to refer me,’ and someone else will say, `I went to another doctor and he did refer me,’ and it will very quickly become known who is willing to provide services and who is not,” he said. “How that will play out in the long term, with patients maybe trying to change doctors because of their positions, we do not know.”

The bill also drew opposition from some supporters of abortion rights. Lawyers for Choice, a legal advocacy group, voiced concern about what it called vague or restrictive language in cases of risk to women’s lives or health, and campaigned unsuccessfully to eliminate the compulsory three-day waiting period. “For women in the remote countryside, or in violent and coercive relationships, for teenage girls living under the control of their parents or women who have difficulty traveling, it is very hard for them to see a doctor once, let alone have to come back again at least three days later,” said Mairead Enright of Lawyers for Choice.

Ailbhe Smyth, a veteran women’s rights activist and a leader of the referendum campaign, said there would be stumbles, but she believed that most providers were committed to making the new law work.

“I think it’s very much about Ireland saying that a past that was very dark and very difficult, particularly for women, that that is behind us,” she said.