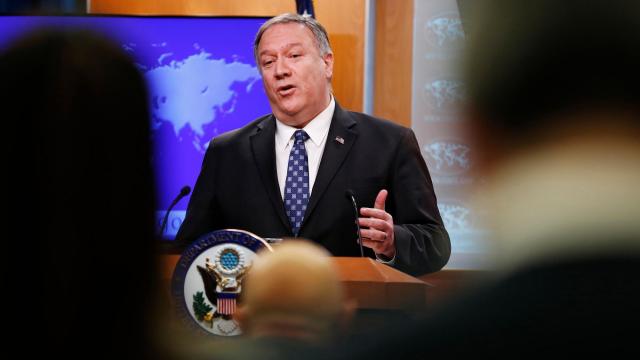 CNN — State Department officials on Friday made clear that the United States does not intend to withdraw troops from Iraq, despite requests from that country's leadership to establish a mechanism to do so.

The statements are the latest in the back and forth between US and Iraqi officials on the question of continued US troop presence in Iraq -- a question that has broad implications for issues of security and sovereignty in the region.

Moreover, the public posturing on the matter points to the tensions that remain in the wake of the US killing of a top Iranian military commander on Iraqi soil last week and the uncertain road ahead for the Trump administration's approach to relations with Iraq.

In a statement Friday, Prime Minister Adil Abdul Mahdi's office said he had requested in a call Thursday with Secretary of State Mike Pompeo that the US send representatives to Iraq to discuss mechanisms for the withdrawal of US troops. The Iraqi Prime Minister also complained that "there are American forces entering Iraq and American drones in its sky without permission from the Iraqi government, and that this is violation of the agreements between the two countries," the statement said.

On Friday, the top US diplomat told reporters that Abdul Mahdi "didn't quite characterize the conversation correctly."

"But to the larger, more important point, we are happy to continue the conversation with the Iraqis about what the right structure is. Our mission set there is very clear: We've been there to perform a training mission to help the Iraqi security forces be successful and to continue the campaign against ISIS, the counter-Daesh campaign," Pompeo said at the White House. "We're going to continue that mission."

State Department spokesperson Morgan Ortagus also responded on Friday, saying, "At this time, any delegation sent to Iraq would be dedicated to discussing how to best recommit to our strategic partnership -- not to discuss troop withdrawal, but our right, appropriate force posture in the Middle East."

"Our military presence in Iraq is to continue the fight against ISIS and as the Secretary has said, we are committed to protecting Americans, Iraqis, and our coalition partners," she said in a statement. "We have been unambiguous regarding how crucial our D-ISIS mission is in Iraq."

US officials tried to convince Iraqi leaders to prevent the parliamentary vote calling for a plan to expel US troops from occurring last Sunday, according to two sources familiar with the discussions. Despite US officials claiming it would be harmful for Iraq to follow through on such a move and hold the vote, ultimately the argument fell flat.

US allies and coalition partners have been meeting with US officials in Washington all week and have expressed concern about the need to maintain a strong US-Iraqi relationship, along with their desire for the anti-ISIS coalition to stay in Iraq. While Trump administration officials have been firm in their conversations with Iraq -- repeatedly urging the country to break away from Iran, according to a source familiar -- US allies are urging the US to treat the situation delicately.

Trump says he'd be 'OK with it' if troops were withdrawn

Despite seemingly conclusive statements from State Department and Pentagon officials earlier this week, President Donald Trump on Friday suggested he would not disapprove of the removal of US troops from the country, despite earlier threats to sanction Iraq if they were expelled.

"I'm OK with it," Trump said in an excerpt from a Fox News interview aired Friday afternoon, adding that the Iraqi government has not privately made the same demands tor US forces to leave.

Although the public conversation has centered largely on the US troop presence, there are also broader questions about diplomatic engagement and de-escalation.

"It is a broader problem that does not only tie to what happened in the past couple of weeks, but a broader one is: What is the US policy towards Iraq? There was an Iraqi criticism always that the US does not have a policy and a strategy for its focus on Iraq," Sarhang Hamasaeed, the director of Middle East programs at the United States Institute of Peace, told CNN on Thursday. "There's a strategy focused on ISIS that has an Iraq component, there's a strategy toward Iran that has an Iran component, but if you neutralize those two elements, what is the US policy vis-a-vis Iraq?"

"A fundamental question for the Iraqi people is: Was the strike against Soleimani a change in strategy or a one-off action as a reaction to what Iran did?" he said.

Despite anger from Iraqi officials, Hamasaeed said that "the signal from Iraq was not to cut diplomatic ties with the United States."

"Even before these past recent incidents there was always concern in Iraq among the political class and even citizens that they don't want to pick sides against the United States," he said. "I think the Iraqis understood there is a degree of risk if they are seen too much tilted or affiliated with Iran that the US may react."

Behind the scenes in working level talks, US officials have emphasized the need for Iraq to choose between the US and Iran, one source familiar with the discussions told CNN. However, this has irritated some Iraqi officials, who point to the fact that their bases were targeted by Iranian missiles in retaliation for Gen. Qasem Soleimani's killing.

Assistant Secretary of State David Schenker was dispatched to the region, but met with leaders only in Iraqi Kurdistan, not Baghdad. The trip was not announced by the State Department due to heightened security concerns, sources said.

Pompeo has participated in more than two dozen phone calls and meetings with foreign officials to discuss the situation in the region after the deadly strike on Soleimani.

European diplomats are urging the US to take a less aggressive tone with Iraq for the sake of stability.

On Friday, Ortagus called for a broader conversation to be had "between the U.S. and Iraqi governments not just regarding security, but about our financial, economic, and diplomatic partnership."

"We want to be a friend and partner to a sovereign, prosperous, and stable Iraq," Ortagus said.