Iraq: Protests continue in Basra in third night of clashes with security forces 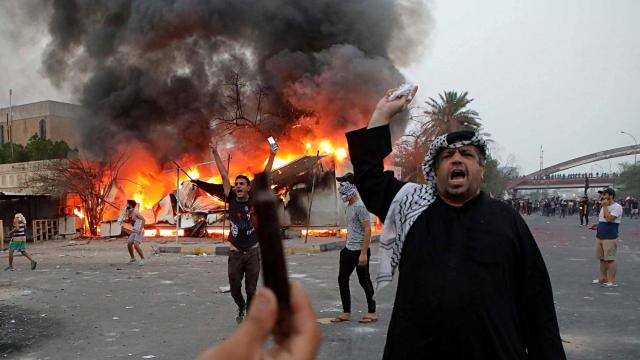 (CNN) — Iraqi security forces fired tear gas and live ammunition Wednesday as demonstrators took to the streets for a third day in the southern city of Basra, activists said.

Anger has swelled in Basra, an oil-rich city that's 280 miles south of Baghdad, throughout the hot summer months over a lack of basic services and high unemployment. Other points of frustration among protesters are prolonged power cuts, contaminated water that has sent hundreds to the hospital and sanitation problems.

Protesters on Wednesday focused their dissatisfaction over poor government services on the Basra governorate building. Scores of people assembled there, a video posted to Facebook shows. After being sprayed with tear gas, demonstrators "threw Molotov cocktails at the building," activist Kadhtem Sahlani told CNN.

Video from Tuesday's skirmishes shows protesters throwing tear gas canisters into a government compound and facing off with armored personnel vehicles. Other footage shows the governorate building aflame while heavy gunfire is heard in the background.

"Is this the way they (the government) reward the people of Basra? By attacking them with live ammunition?" protester Fadhil Qusay said, according to Reuters.

Political forces in Baghdad -- which continue to struggle to form a new government following the inconclusive parliamentary election more than four months ago -- have vowed to address Basra's problems. But so far, only promises have reached the city.

Iraqi Prime Minister Haider al-Abadi said Tuesday at his weekly news conference that he had ordered an immediate probe into the first protester death before blaming the unrest on unknown troublemakers.

"I ordered a quick investigation to know what has happened, and who is behind it," Abadi told reporters, before adding, "There are parties that are pouring oil on fire, who are setting people against the security forces to jeopardize Basra security."

Meanwhile, Shia firebrand cleric Muqtada Al-Sadr appears to have sided with protesters, saying they "only want to earn their living with dignity."

"We have to unite efforts to save Basra from corruption, sectarianism and militias," Al-Sadr continued. "Basra is our pride and dignity. It's Iraq's beating heart. Stop assaulting Basra and its people. Don't test our patience."