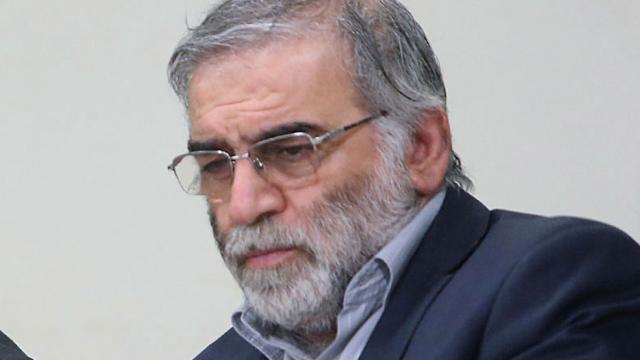 Mohsen Fakhrizadeh, who became the face of Iran's controversial nuclear program, was killed in a district east of Tehran on Friday, in what Iranian officials are calling an assassination.

"There are two matters that people in charge should put in their to do list: 1- To follow up the atrocity and retaliate against those who were responsible for it. 2- To follow up Martyr Fakhrizadeh's scientific and technical activities in all fields in which he was active," Khamenei wrote Saturday in a tweet from an account often attributed to him, making a veiled reference to the country's nuclear activities.

He added: "Our distinguished nuclear scientist in the defense of our country, Mr Mohsen Fakhrizadeh was killed by the oppressive enemies. This rare scientific mind lost his life for his everlasting great scientific work. He lost his life for God and the supreme leader. God shall reward him greatly."

At a cabinet meeting Saturday, Iranian President Hassan Rouhani also said the country would retaliate and pointed to Israel for orchestrating the attack. "The think tanks and the enemies of Iran must know that the Iranian nation and the officials in charge in the country are brave and determined to respond to the murder in time," he said.

He added that the killing was carried out at "the filthy hands of oppressors, in concert with the illegitimate Zionist regime."

In April 2018, Netanyahu mentioned Fakhrizadeh by name when he unveiled a nuclear archive that he said Israeli agents had smuggled out of Iran. He called him the head of a secret nuclear project called Project Amad. "Remember that name, Fakhrizadeh," Netanyahu told reporters.

Fakhrizadeh is also mentioned in multiple reports by the US State Department and the International Atomic Energy Agency as holding deep insight into Iran's nuclear capabilities.

The funeral and burial of Fakhrizadeh will take place Monday, according to the semi-official Fars News Agency, which did not specify a location.

In an earlier report, Fars said the remains of Fakhrizadeh will be taken Saturday on a pilgrimage to the shrine of Imam Reza for blessing in the northeastern city of Mashhad. Afterward, his body will be taken back to Tehran for a final visit to the tomb of Ayatollah Khomeini, the founder of the Islamic republic.

Fakhrizadeh was head of the research center of new technology in the elite Revolutionary Guards, and was a leading figure in Iran's nuclear program for many years.

The killing could further fuel tensions between Tehran and Washington in the final weeks of US President Donald Trump's term. US-Iran relations have rapidly deteriorated during Trump's presidency.

Iran began to withdraw from its commitments to the 2015 landmark nuclear deal in 2019, a year after Trump pulled out of the agreement and unleashed crippling sanctions on the country.

The Trump administration said it was closely monitoring the apparent assassination. A US official told CNN the death "would be a big deal."

Trump on Friday retweeted a post by prominent Israeli journalist Yossi Melman, who wrote: "Fakhrizadeh-Mahabadi assassinated in Damavand, east of Tehran according to reports in Iran. He was head of Iran's secret military program and wanted for many years by Mossad. His death is a major psychological and professional blow for Iran."

Mossad is the foreign intelligence agency of Israel.

Students and young Iranians have held small protests in Tehran over the past two days outside several government buildings. At one outside the foreign ministry on Saturday, protesters burned posters depicting Trump and US President-elect Joe Biden, as well as US and Israeli flags.

Maj. Gen. Hossein Dehghan, Khamenei's military adviser, also accused Israel of the killing, adding that the country had timed it "tactically" as the Trump administration enters its final weeks in power.

"Zionists, in the last days of the political life of their gambler ally, are pursuing increasing pressure on Iran to create an all-out war. The night is long! We will react to the death of this poor martyr in such a way that they will regret their action," he wrote on Twitter, adding Iran would "descend like lightning" on Fakhrizadeh's killers.

The European Union condemned the killing Saturday, calling on all parties connected to the incident to exercise "maximum restraint" in order to prevent a possible escalation.

"This is a criminal act and runs counter to the principle of respect for human rights the EU stands for," a spokesperson for the External Action Service, the EU's diplomatic arm, said in a statement.

"In these uncertain times, it is more important than ever for all parties to remain calm and exercise maximum restraint in order to avoid escalation which cannot be in anyone's interest."

The United Kingdom's Foreign Office said it was "urgently trying to establish the facts" following reports of Fakhrizadeh's killing.

Lebanon's Hezbollah, the Iran-backed Lebanese militant group, also condemned the killing. Hezbollah's second-in-command, Naim Qassem, said that agents of the US and Israel were behind the assassination.