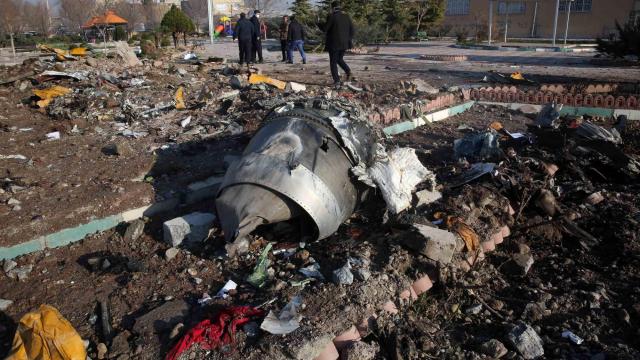 The general staff of Iran armed forces says a Ukrainian plane that crashed on Wednesday was brought down due to human error. Iran targeted the passenger plane unintentionally, Iran's Press TV reports.

The field in Iran where a Ukrainian aircraft crashed two days ago has been cleared of most of the wreckage, and the public has been trawling through what's left behind, new images shared with CNN show.

The photos, taken near a soccer field in Laleh Park in the town of Shahedshahr on Friday, point to a clear lack of security at the site, just a day after western intelligence officials said Iran shot down the jet with surface-to-air missiles. Iran has denied any hostile act, calling the assessment a "big lie."

Normally, forensic officers from major investigative organizations would be poring over the wreckage to see it in its natural state before removing it to a secure area.

An eyewitness at the crash site told CNN on Friday that looters and "garbage men" were "wandering around," picking up debris, objects made of aluminum and anything else deemed valuable, as police and Revolutionary Guard Corps tried to disperse them.

The head of Iran's Civil Aviation Authority Ali Abedzadeh told CNN on Friday that fragments of the plane had been taken to a hangar off-site to "reconstruct" it for "investigating the cause of the crash," and that the remains of victims had been sent to a forensic lab for DNA testing.

Ukraine's Foreign Minister Vadym Prystaiko told CNN news partner CTV News that Ukrainian investigators had been missing the chairs from the plane, but that they were now beginning to get them from Iranian authorities. The investigators need to check parts for chemical residue, "which would allow us to indicate there was some chemical used in explosives," he said.

He told CNN that his country is not ruling out terrorism and is checking to see whether a bomb was on the plane.

The foreign minister said there was a delay before the plane departed the gate during which some luggage was taken off the plane. He said Ukraine wants to know why.

He added, "as soon as we have something to share we will do it we understand people have to know the truth."

Speaking at the White House on Friday, US Secretary of State Mike Pompeo said Washington believes it is "likely" that Iran was responsible for the downing of the Boeing 737-800 and that an "appropriate response" would be meted out when a "final determination" is made.

CNN obtained a video that appears to show a missile strike an object in Tehran's night sky, around the same time that the Ukrainian plane crashed early Wednesday, and separate footage that captures the moment of the crash in Shahedshahr.

The crash came just hours after Iran fired missiles at Iraqi military bases housing US troops in retaliation for a drone strike at Baghdad airport that killed Iranian commander Qasem Soleimani, who was one of Iran's most powerful and influential military leaders.

All 176 people on board the Boeing 737-800 were killed when the Kiev-bound plane crashed shortly after taking off from Imam Khomeini Airport. The victims include 82 Iranians, 63 Canadians, 11 Ukrainians, 10 Swedes, four Afghans, three Germans and three British nationals.

Iranian authorities are in possession of the two flight data recorders, also known as black boxes, which Prystaiko said Ukrainian investigators have seen but don't have access to. He added that Iran was, however, cooperating, and that he expected Ukraine could "extract and analyze" the data and recordings.

The last words of the pilot were "peaceful and that everything was OK," he said.

Prystaiko said Ukrainian investigators have access to the recording of the conversation between the control tower and the Ukrainian International Airlines crew.

The recent escalated hostilities between the US and Iran have complicated the thorny task of investigating the crash. US government investigators, for example, cannot fly into Tehran and meet with government officials without a license. That prohibition is due to longstanding sanctions rather than the most recent events, according to two US officials who spoke on the condition of anonymity.

Pompeo and Treasury Secretary Steven Mnuchin announced on Friday that President Donald Trump was authorizing yet more sanctions on Iran.

The Iranian government, which under international protocol has control of the investigation, had earlier said it would not work with the US or Boeing in the probe, but on Friday reversed its position.

If Iranian authorities are unable to reconstruct and analyze the information from the fight data recorders, they said they would seek help from international partners Russia, France, Canada or Ukraine.

Ukrainian investigators were given access to the black boxes on Friday, according to Ukraine's foreign minister, but had yet to start examining the information, which includes recordings of communications between the pilot and Tehran flight control.

The exchange of attacks between Tehran and Washington -- both on Iraqi soil -- marked a dramatic escalation of tensions between the adversaries and raised fears of another proxy war in the Middle East.

A US official familiar with the intelligence said the aircraft was downed by two Russian-made SA-15 surface-to-air missiles. The US saw Iranian radar signals lock onto the jetliner, before it was shot down.

The US increasingly believes this was accidental.

The US, Britain, Canada, Sweden and the European Commission have called for an independent and credible investigation.