Iran Widens an Already Huge Rift Between Europe and U.S. 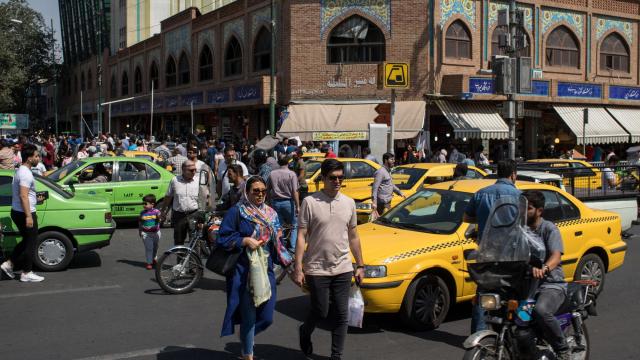 BRUSSELS — Of all the issues dividing Europe and the Trump administration, Iran has become the sharpest, with the Europeans actively working against U.S. policy, placing them in league with Russia, China and Iran.

Since earlier this year, when it pulled out of the Iran nuclear deal that was a centerpiece of former President Barack Obama’s diplomacy, the Trump administration has pressed ahead with punishing sanctions against Tehran.

The leading countries of Europe, meanwhile, trying to preserve the nuclear accord, are looking to set up an alternative payment mechanism that would sidestep the U.S.-dominated banking system, and Washington’s new sanctions.

As they do so, they are pressing Iran to adhere strictly to the terms of the nuclear agreement, to avoid giving the United States and Israel a pretext for starting a war — an increasing concern.

And they are counseling Tehran to keep calm and wait out President Donald Trump’s term, in the hope that he will not be re-elected, senior European diplomats say.

That, of course, could be wishful thinking, but the divergent policies toward Iran are leading to deeper tensions between the European Union and the Trump administration.

Last month, the national security adviser, John Bolton, mocked the European Union for being “strong on rhetoric and weak on follow-through,” adding: “We do not intend to allow our sanctions to be evaded by Europe or anyone else.”

Trump’s decision to withdraw from the Iran nuclear deal “opened a rift between the U.S. and its European allies that is unlikely to close again as long as he is in office,” wrote Volker Perthes, director of the German Institute for International and Security Affairs in Berlin.

“Europe and the U.S. are not simply taking different approaches to Iran, but are actively working against one another in a policy field which is of significant strategic interest to both sides,” he said.

The dispute over the Iran deal, he continued, “is a major driver of European debates about a form of ‘strategic autonomy'” from the United States and represents a more serious cleavage in the Western alliance than did the invasion of Iraq in 2003.

The latest U.S. sanctions against Iran, scheduled to take effect Nov. 4, will be the toughest so far, hitting the country’s oil industry and central bank. The sale of Iranian oil and petrochemical products will be restricted, and foreign financial institutions will face sanctions for transactions with the Iranian central bank of other financial institutions designated under legislation Congress passed in 2012.

To get around the penalties, the Europeans are hoping to create a “special purpose vehicle” to allow payments related to Iranian exports, including oil, and Iranian imports, “to assist and reassure economic operators pursuing legitimate business with Iran,” according to the European Union.

The mechanism could use a form of barter, offsetting values of imports and exports priced in euros while avoiding banking transactions. The main objective is to allow Iran to keep selling its oil, on which much of its economy depends — exactly the reason Washington is trying to restrict that commerce.

But it remains unclear if the European efforts will succeed. Big multinational firms like Total, Peugeot, Renault, Eni, Siemens and Daimler are already pulling out of Iran, saying they cannot risk being shut out of the U.S. financial system.

Iran’s oil exports have declined significantly since August, putting pressure on supporters of the nuclear deal in Tehran and strengthening more hard-line elements that want to break the deal and start enriching uranium again, in greater quality as well as quantity.

“The primary objective of the European Union is to provide a face-saving way for Iran to stay in the” nuclear deal, said Ellie Geranmayeh of the European Council on Foreign Relations. “The Europeans are trying with Russia and China to create an economic package for Iran, but also some political steps to keep Iran in the deal, especially after Nov. 4.”

The Europeans are also trying to help small and medium enterprises with little exposure in the United States to continue trading with Iran.

The question is how far the Trump administration will go to enforce sanctions, and whether it will allow waivers, as it has in the past, for work with Iran’s civilian nuclear program, Geranmayeh said.

“But if the deal collapses altogether, you can bet Iran will expand its nuclear program,” she said, “and that would put everyone back in the pre-2013 condition, and Europe especially does not want to be there.”

Given the existing tensions between Iran and Sunni Arab states like Saudi Arabia and Egypt, not to speak of those with Israel, a war is not inconceivable. A conflict over Syria, especially with Iranian and Iranian-backed forces near the Israeli-occupied Golan Heights, could create a pretext for Israel to bomb Iran’s nuclear facilities, as it wanted to do before the nuclear deal was signed. And while Obama restrained Israel, Trump might not.

The Europeans are telling Tehran that the nuclear pact is not just an economic deal, “but has important political and security dimensions for Iran, and so far Iran is listening,” Geranmayeh said. Europe is emphasizing its efforts at de-escalating tensions, and has already had three meetings as part of a new security dialogue with Iran.

Washington has said that the nuclear deal was faulty, in part because it did not restrain Iranian actions in the region, like its support for states and groups the Americans consider troublemakers: the Syrian government; Hezbollah, the Lebanese Shiite group; and Hamas, the militant group in Gaza.

But European governments say the Americans have done little to roll back Iranian influence. It is the Europeans who are trying to create a platform for dialogue with Iran and other regional actors, and who are pushing Iran to discuss its activities in Iraq, Syria and Lebanon.

There is one other important difference, Geranmayeh said. While Washington now “sees no shades of gray in the Iranian leadership,” she added, “the European Union countries, on the ground in Iran, see competitive factions inside the regime.”

The Europeans are trying to support those in Iran, like Foreign Minister Mohammad Javad Zarif and President Hassan Rouhani, whom they regard as more moderate, and whose political standing has been weakened by Trump’s actions.

Joseph Cirincione, a nuclear expert and the president of the Ploughshares Fund, which is committed to nonproliferation, wrote recently that the Trump administration seems to be heading toward a war in the Middle East.

He accused both Bolton and Secretary of State Mike Pompeo of “cherry-picking intelligence and inflating threats,” adding: “They’re making specious connections between Iran and terrorists, including al-Qaida and the Islamic State. And they’re ratcheting up their rhetoric.”

These tensions are about to get worse, Cirincione said, with the imposition of the stiff new sanctions. The likelihood that this pressure will explode into military conflict is rising dramatically,” he said.

His dark view is precisely what European officials fear, and precisely why they are trying to persuade Iran to adhere to the nuclear deal, to modify its behavior in the region, and to wait out the Trump presidency.