Iran's Rouhani pushes back on Trump 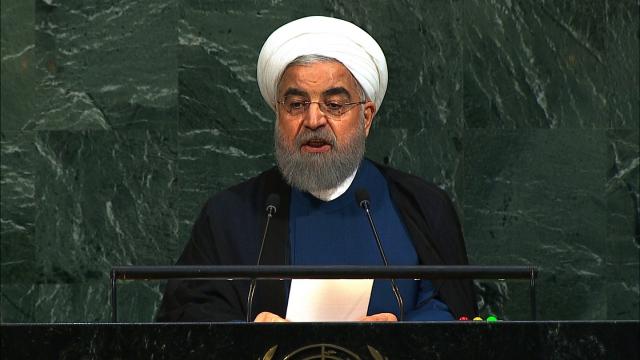 Iran's president said it would be a "great pity" if "rogue newcomers" destroy the international nuclear deal that lifted sanctions in exchange for curbs on Tehran's nuclear program.

"It will be a great pity if this agreement were destroyed by rogue newcomers to the world of politics," he added in a clear reference to US President Donald Trump, who addressed the General Assembly the day before and offered scathing criticism of both Iran and the 2015 international agreement.

"I declare to you the Islamic Republic of Iran will not be the first country to violate the agreement, but it will respond decisively and resolutely to its violation by any party," Rouhani told the United Nations Wednesday.

Rouhani used his address at the annual UN meeting to offer a counterpoint to Trump's scathing criticism of his country and the nuclear deal, pointing to the economic benefits, the international backing for the pact and the potential fallout if the deal is undermined.

Most particularly, Rouhani warned that if Trump walks away from the deal, it will undermine US credibility on the world stage.

"By violating its international commitments the new US administration only destroys its credibility and undermines international confidence in negotiating with it or accepting its word or promise," Rouhani said.

Rouhani gave his remarks shortly after Trump told reporters during a meeting with the president of the Palestinian Authority that he has decided on a plan of action for the Iran deal.

"Well, I have decided," Trump said, adding that, "I'll let you know what the decision is."

Trump has repeatedly hinted that he is inclined to scrap the deal, most recently Tuesday in his own remarks before the General Assembly.

"We cannot let a murderous regime continue these destabilizing activities while building dangerous missiles, and we cannot abide by an agreement if it provides cover for the eventual construction of a nuclear program," Trump told the assembly.

He went on to declare that the "Iran deal was one of the worst and most one-sided transactions the United States has ever entered into.-Frankly, that deal is an embarrassment to the United States."

Rouhani called out Trump indirectly, describing his speech as "ignorant, absurd and hateful rhetoric filled with baseless allegations" that contradicted the spirit of the UN, which he called a "world body to bring governments together to combat war and terror."

And he made the point that the deal is not just the purview of the US, but was arrived at by a large number of countries. "The deal is the outcome of two years of intensive multilateral negotiations overwhelmingly applauded by the international community and endorsed by the Security Council," Rouhani said.

"As such, it belongs to the international community in its entirety and not only to one or two countries."

In a speech that was clearly meant to position Iran as a moderating force and member of the international community -- despite criticism of its support for terrorism and regimes such as Bashar al-Assad's Syria -- Rouhani held up the Joint Comprehensive Plan of Action, as the Iran deal is known, as evidence of Tehran's aim to cooperate and engage with the world.

"The JCPOA can become a new model for global interactions, interactions based on mutual constructive engagement between all of us," he said. And Rouhani offered a subtle reminder that many countries already have businesses engaging with Iran -- businesses that might stand to lose if the US reimposes punishing sanctions.

"We have opened our doors to engagement and cooperation," Rouhani said. "We have concluded scores of development agreements with advanced countries in both East and West."