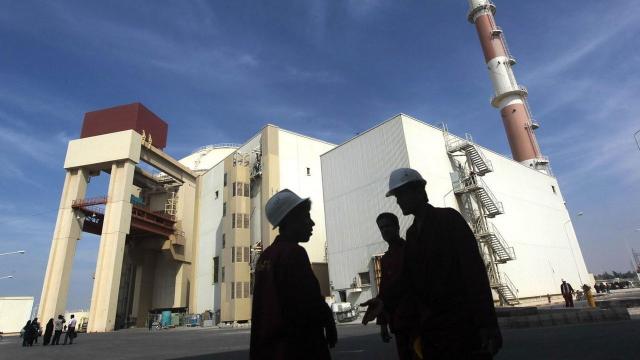 CNN — Iran has launched a new generation of advanced centrifuges to enrich uranium, the nation's nuclear chief announced Monday, the latest in a series of violations of the nuclear deal signed between Tehran and world powers in 2015.

The announcement came as Iran marked the 40th anniversary of the US embassy siege, when Iranian students stormed the US embassy in Tehran and took 90 people hostage, including 66 Americans.

"The number of centrifuges we have installed during these two months is about 15 new generation centrifuges, which is a huge achievement."

The advanced centrifuge machines allows Iran to speed up its uranium enrichment. Under the terms of the nuclear deal, Tehran cannot use IR-6 centrifuges, among other models, to produce enriched uranium for at least ten years.

The deal allowed Iran to enrich uranium with just over 5,000 of its first-generation IR-1 centrifuge machines and the nation was allowed to use advance centrifuges for research purposes only.

Tehran has gradually scaled back its commitments to the nuclear deal after US President Donald Trump withdrew from the pact in 2018 and reimposed economic sanctions on Iran.

US sanctions have crippled Iran's economy, causing the nation's currency to plummet and prices to soar. As a result, the economy has contracted and food and medical shortages are rampant.

Iran announced in July that its stockpiles of enriched low-grade uranium had exceeded the 300-kilogram limit set in the deal. President Hassan Rouhani later confirmed in September that the nation was using advanced models of centrifuges to enrich uranium.

The nuclear deal was intended to limit Iran's civilian nuclear program and prevent it from developing nuclear weapons.

Iranian Foreign Minister Javad Zarif has insisted in the past that Iran is not in violation of the nuclear deal, because the US was the first to walk out on it.

Iranians marked the 40th anniversary of the US embassy siege with rallies across the country and chants of "death to America," state media said.