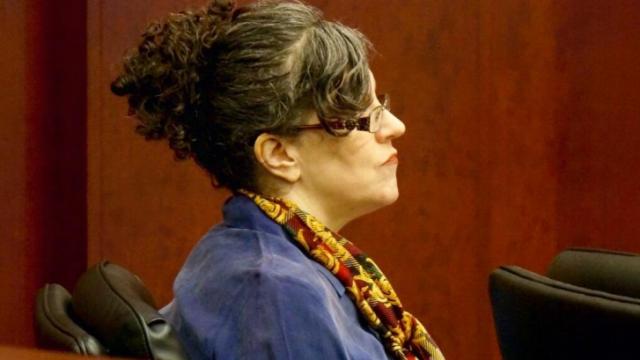 Raleigh, N.C. — Joanna Madonna collapsed to the floor and appeared to be sobbing when law enforcement officers told her that they had found her husband's body dumped near Falls Lake, an investigator in the case told the court.

"She immediately covered her face, fell to the ground, on the ground sobbing," Detective Brian Gay, with the Wake County Sheriff's Office, said Monday.

When pressed though, Gay said he didn't see her shed any tears. That and other behavior during their initial encounter led investigators to suspect Madonna was not telling the whole truth about the death of Jose Manuel Perez.

"The totality of the behavior I had observed was not to my satisfaction, and it did raise suspicion," Gaye told jurors.

Madonna faces a charge of first-degree murder. Prosecutors said Perez, 64, was stabbed a dozen times. Madonna admits she stabbed him but claims it was self-defense.

Gay said Madonna told him that Perez "had been verbally abusive recently and had started drinking."

Both Madonna and Perez were recovering alcoholics.

Gay also questioned Madonna's initial story that that her husband had left their home, at 12412 Schoolhouse St., with a suitcase and plans to move to Florida.

Madonna changed her story, Gay said, after her daughter told investigators that the couple had left the house together and only Madonna returned.

"I felt like Miss Madonna had lied to us and there was more going on than she had led us to believe," said Raleigh Police Detective Brent Snowden.

When investigators wanted to ask her more questions, Madonna declined to talk without an attorney.

Editor's Note: WRAL's video connection to the Wake County courthouse was damaged Monday afternoon. Live streaming will resume once that access is restored.