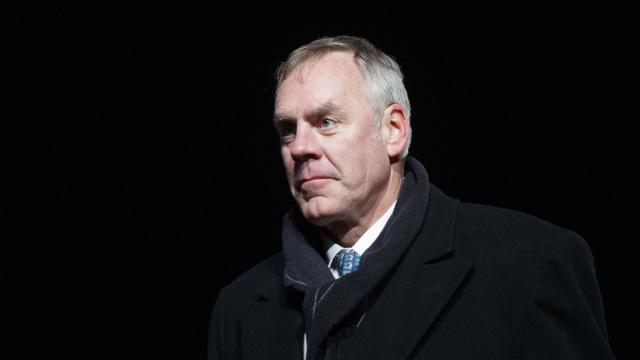 WASHINGTON — In one corner was Interior Secretary Ryan Zinke, a swaggering cowboy type who once rode to work on a horse named Tonto and has faced at least a dozen ethics investigations.

In the other was Rep. Raúl M. Grijalva, D-Ariz., who has been accused of having ethical issues of his own — and who is itching to take on Zinke next year from his perch as the chairman of a committee on Capitol Hill.

Their tensions exploded Friday into one of the more remarkable public feuds in recent Washington history — a brutal exchange that began with Grijalva calling on Zinke to resign, followed by Zinke calling Grijalva a drunkard who had used taxpayer “hush money” to cover up misbehavior, and Grijalva telling Zinke to, in effect, bring it on.

“It’s hard for him to think straight from the bottom of the bottle,” Zinke wrote on Twitter, in a message that left many in the Capitol slack-jawed. “This is coming from a man who used nearly $50,000 in tax dollars as hush money to cover up his drunken and hostile behavior. He should resign and pay back the taxpayer for the hush money and the tens of thousands of dollars he forced my department to spend investigating unfounded allegations.”

He included “#TuneInnForMore,” a reference to the Tune Inn, a popular Capitol Hill watering hole that Grijalva frequents. An industry newsletter reported that the congressman was there Friday when Zinke blasted out his tweet to his more than 88,000 followers.

The “hush money” reference was to a 2015 agreement between Grijalva and a former House employee who had accused him of overseeing a hostile work environment and frequently being drunk. The employee had threatened to file a lawsuit, and was paid $48,395 in severance.

Grijalva has acknowledged that a severance package was paid to an employee but has insisted that he does “not work while drunk” and that he has never had a hostile workplace environment. Still, he did tell a Tucson television station earlier this year that he beat “the demons” of alcohol when he was younger. A House ethics board looked into the severance payment and recommended that a complaint against Grijalva be dismissed.

Grijalva declined an interview request Friday, but shot back at Zinke with a statement of his own: “The American people know who I’m here to serve, and they know in whose interests I’m acting. They don’t know the same about Secretary Zinke.” Personal attacks in the capital are, of course, nothing new — they date back to the earliest days of the republic. During the presidential campaign of 1800, for instance, President John Adams was branded a “hideous hermaphroditical character” — a mix of man and woman — by allies of Thomas Jefferson.

But even by the combative and vituperatively partisan standards of President Donald Trump’s Washington, the Zinke tweet was a startling breach of decorum and of the norms that usually govern relationships between senior government officials — particularly a Cabinet secretary and a member of a congressional committee overseeing his department.

It also made little political sense, said Aaron Weiss, a spokesman for the Center for Western Priorities, an environmental advocacy group that is critical of Zinke.

“My jaw did literally drop when I read it,” Weiss said in an interview. “It is so far outside the norms and just disgusting, I guess, to even go there. But then immediately after that my mind went to how strategically poor a choice it is to antagonize the likely incoming chairman of the committee that you have to answer to.”

A Republican former congressman from Montana, Zinke, 57, is a constant target of liberals and environmentalists who have criticized him for his work to weaken environmental rules and for what they call his suspect ethical conduct.

The tit-for-tat between the Cabinet secretary and the congressman quickly escalated into partisan warfare. Members of the Congressional Western Caucus, a mostly Republican group that includes some of Grijalva’s fellow Arizonans, wrote on Twitter that he, not Zinke, was the one who should resign. “Well said, @SecretaryZinke!” the group wrote on Twitter.

Then the Democratic leader, Rep. Nancy Pelosi of California, jumped to Grijalva’s defense, also on Twitter.

“We couldn’t have a clearer contrast with the values-based leadership of @RepRaulGrijalva to protect the planet for our children than @SecretaryZinke’s toxic, special interest agenda,” Pelosi wrote.

Zinke has moved to diminish or undo multiple Obama-era environmental rules on oil drilling and coal mining, while overseeing the largest reduction of federal land protection in the nation’s history, including an effort to slash the size of Bears Ears National Monument in Utah. And he has staffed the agency charged with overseeing the nation’s public lands and national parks with a host of top officials who are former oil lobbyists — notably his deputy, David Bernhardt, a former oil lobbyist who once represented Halliburton, the oil and gas services company run by Dick Cheney before he became vice president. Zinke’s ethics have also come under scrutiny, amid federal investigations into allegations that he abused rules on travel spending and maintained close ties with industries he oversees. In some cases he was cleared, and some investigations were closed because of a lack of cooperation with investigators. But at least one has been referred to the Justice Department — a possible prelude to a criminal investigation.

Grijalva, 70, who entered politics as a community organizer fighting school segregation, is an ardent environmentalist who campaigned for Sen. Bernie Sanders of Vermont for president in 2016 and has a photograph of activist Cesar Chavez on his office wall. He favors thick silver and turquoise bracelets and shuns ties, and his voting record is consistently ranked as one of the most liberal in the House.

In January, Grijalva is set to become chairman of the House Natural Resources Committee, a once backwater panel, and he plans to elevate it into a central arena for Democrats to clash with the Trump administration, over both environmental policy and corruption.

In an interview in his Washington office a few days before Thanksgiving, he said he fully intended to use his most powerful weapon: the ability to subpoena Zinke.

“He needs to go,” Grijalva said of Zinke — a point he amplified in an opinion article published Friday in USA Today. “He holds his job as a public trust, not as a steppingstone to his further personal ambitions,” Grijalva wrote. “He has abused that trust and damaged the Interior Department in the process. The least he can do is step down and give his successor a chance to begin reversing that damage.”

The question now is how the two men will go on from here. In the interview, Grijalva harked back to the George W. Bush White House, which also advanced a pro-drilling agenda and stood accused of conflicts of interest. He also seemed to issue Zinke a warning.

“Even under Bush, the fox wasn’t fully in the henhouse,” Grijalva said. “In this case, it’s living there. But I’ll be running the show.”

The heated language, said presidential historian Robert Dallek, stood out for its ugliness. “Where are the standards?” Dallek asked. “Where does anybody show respect, regard, for some kind of public decency as to what you say about opponents?”