Interest Groups Turn Up Pressure on Senators Before Kavanaugh Vote 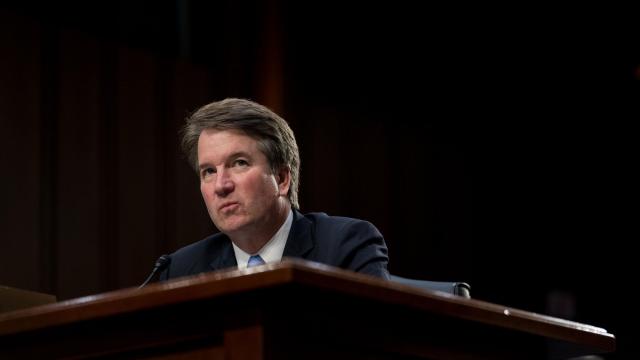 WASHINGTON — Pressure is intensifying on undecided senators before a vote to confirm President Donald Trump’s Supreme Court nominee, with one senator — Susan Collins, R-Maine — reporting that she and her staff have been targeted with a barrage of calls, including some using vulgar language and threats to push her to vote against Judge Brett Kavanaugh.

With last week’s confirmation hearings behind them, interest groups and advocates are spending hundreds of thousands of dollars on advertising to target both Collins and another undecided Republican who supports abortion rights: Sen. Lisa Murkowski of Alaska. Also in the cross hairs are three vulnerable Democrats running for re-election in states won by Trump.

But Collins, who prizes her reputation for independence, appears to be bearing most of the onslaught. Her decision will probably influence that of Murkowski, as well as those of the three vulnerable Democrats: Sens. Joe Manchin of West Virginia, Heidi Heitkamp of North Dakota and Joe Donnelly of Indiana.

The campaign aimed at Collins comes largely from progressive groups, abortion rights advocates and other opponents of Kavanaugh. Planned Parenthood has conducted focus groups with independent female voters in Maine. Activists have streamed into Collins’ offices in Portland and elsewhere with stacks of letters and oral testimony of abortions and pre-existing health conditions.

Aides to Collins estimated that her offices received about 3,000 coat hangers by mail to date, a reference to a time before Roe v. Wade, when some women used wire coat hangers to try to end unwanted pregnancies. A group of men and women, some garbed in red robes and white bonnets — an allusion to “The Handmaid’s Tale,” the Margaret Atwood book and television series — demonstrated outside the senator’s home in Bangor over the weekend.

And in a more novel stroke, a crowdfunding campaign started by two local advocacy groups, Maine People’s Alliance and Mainers for Accountable Leadership, and Ady Barkan, a progressive activist with amyotrophic lateral sclerosis, has raised more than $1 million that the groups say they will donate to a Democrat challenging Collins in 2020, unless she votes no.

“This quid pro quo fundraising campaign appears to be the equivalent of an attempt to bribe me,” Collins said in an emailed statement Tuesday, adding, “Attempts at bribery or extortion will not influence my vote at all.”

But Marie Follayttar Smith, a director of Mainers for Accountable Leadership, defended the effort and said activists would continue their pressure campaign.

“We expect her to represent us, and we are screaming in the streets practically,” she said in an interview. “What else does Maine need to do? What else do Mainers need to say before they are listened to and represented?” The frustration has boiled over at points. Annie Clark, a spokeswoman for Collins, provided The New York Times with copies of a letter and multiple voicemail messages addressed to the senator using vulgar language and outright threats. One caller told a 25-year-old female staff member at one of Collins’ Maine offices that he hoped she would be raped and impregnated.

Despite the passions, two grueling days of questioning before the Senate Judiciary Committee last week did not seem to derail Kavanaugh’s confirmation. While Senate Democrats are questioning his veracity — and are likely to step up those attacks when the Senate reconvenes on Wednesday — Republicans, who hold 51 seats in the Senate, have so far held rank.

Collins and Murkowski have been pivotal votes in the Senate before; both voted against the repeal of the Affordable Care Act, helping doom one of Trump’s campaign promises. Brian Fallon, executive director and founder of Demand Justice, a liberal advocacy group, says his strategy is to turn up the pressure on Democrats to announce their opposition to Kavanaugh, as a way of pressuring the senators from Alaska and Maine.

“The intensity on Collins and Murkowski is rising,” he said, “but I think we have an even better shot of making them feel the heat if more Democrats would come out and express opposition, and create a dynamic like there was on health care, where it was clear that Collins and Murkowski would be the deciders.”

Fallon said his group had conducted polling showing that the three Democrats would not face political consequences for voting against Kavanaugh, because independent voters do not have strong feelings about the confirmation, while Democrats would be less likely to vote for them if the senators back Kavanaugh.

But conservative advocacy groups are counting on those three senators to vote in favor of Kavanaugh, just as they voted in favor of Justice Neil Gorsuch last year. Judicial Crisis Network, a conservative advocacy group, is running a $600,000 advertising campaign to pressure the three to announce their opposition, said its chief counsel and policy director, Carrie Severino.

“We know that Senator Schumer has asked them not to come out one way or the other as long as they can,” she said, referring to Sen. Chuck Schumer, D-N.Y., the minority leader. “But we think that they’ve had a good opportunity now to hear Judge Kavanaugh, and they shouldn’t delay things right now just to help Senator Schumer’s electoral plans.”

In Alaska, a key constituency of Murkowski’s — Alaska Natives — are lobbying the senator to oppose Kavanaugh’s confirmation, flying to Washington and sending letters listing a series of concerns, chief among them the judge’s views on indigenous rights. The Alaska Federation of Natives, the largest statewide native organization, will meet with Murkowski on Wednesday.

The issue was raised during the judge’s confirmation hearings by Sen. Mazie Hirono, D-Hawaii, who released previously secret emails in which Kavanaugh questioned Native Hawaiians as a protected group. Hirono also grilled him on a separate opinion piece published in The Wall Street Journal in 1999 titled, “Are Hawaiians Indians? The Justice Department Thinks So,” in which the nominee stated opposition to the Office of Hawaiian Affairs.

“We view ourselves in solidarity with our Native Hawaiian brothers and sisters,” said Richard J. Peterson, the president of the Tlingit and Haida Indian tribes. “The fact that he questions their validity tells us that he is going to do the same with us.”

Peterson, who wrote a letter on behalf of his tribe to Murkowski urging her to oppose the confirmation, said that the more than 30,000 constituents he represents largely “felt we were OK” with Gorsuch’s confirmation. But when it comes to Kavanaugh’s nomination, he said, “we have some pretty grave concerns.”

At the top of many Alaskan Natives’ list of concerns is how Kavanaugh would rule on a case poised to appear before the Supreme Court that could endanger federal protections that ensure subsistence fishing rights for Alaska Natives.

“It represents a big threat to the native way of life,” said Heather Kendall-Miller, a lawyer with the Native American Rights Fund. “It will lead to massive civil disobedience because people need to fish.” Alaska Natives have been strong supporters of Murkowski. The Alaska Federation of Natives, the largest statewide Native organization in Alaska representing 186 federally recognized tribes, raised $1.6 million and grass-roots support for her in 2010, when she ran a write-in campaign for re-election after a Tea Party challenger beat her in the Republican primary.

“We helped most Alaskans learn how to spell ‘Murkowski,'” Peterson joked.