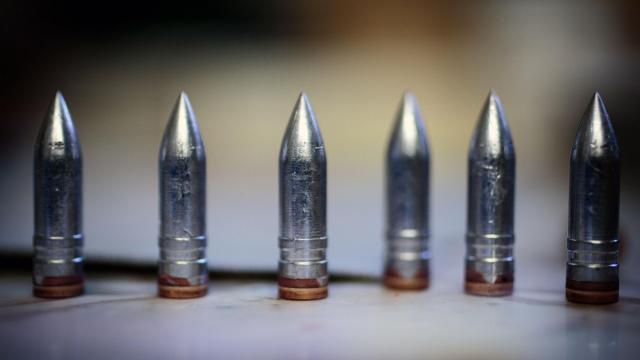 WRIGHTSVILLE, Pa. — Standing inside his cluttered garage workshop, Michael Crumling, a 29-year-old gunsmith, proudly showed off an impressive collection of lead bullets he has meticulously crafted from scratch.

Across the country, millions of weapons aficionados like Crumling reload their own ammunition and cast their own bullets — time-consuming hobbies that have been a part of firearms culture for generations.

But Crumling has also created something else in his garage that distinguishes him from his peers, a potential solution to a problem that has long vexed creators of 3D printed guns: a bullet that won’t ruin the plastic firearms.

And yet Crumling says he has no plans to sell or mass produce the designer round, even though it represents the next step in making printable guns more reliable, and the next front in an ongoing regulatory fight over homemade weaponry.

“I don’t see the point,” he said recently, explaining that despite the allure of 3D guns and ammunition, people who want to build their own firearms can do much better with off-the-shelf parts from their local hardware stores — or eBay, which he turned to when constructing a submachine gun with metal he filed and bent himself.

Amid a national debate over tighter access to guns, and legislative efforts to regulate the unfettered sale of bullets and shells, interest in this pastime has been bolstered by a lively online DIY community that trades in how-to YouTube videos and engages in passionate web forum discussions about best practices and likely legal challenges.

As fervid as DIY gunsmiths are, an equally passionate online community has emerged around homemade ammunition. About 5 million out of roughly 43 million hunters and sport shooters in the United States make their own bullets and shells, according to reloading companies.

These DIY hobbyists consist primarily of two groups: Reloaders who take spent shell casings that are left behind after a weapon, usually a semi-automatic, is fired, and make them usable again by carefully refilling them with gunpowder and coupling that with a new primer and a bullet. And home casters who make bullets from scratch, typically by melting lead they buy online or get from junkyards, auto body shops or gun ranges.

Enthusiasts cite this pursuit as a way to customize ammunition for heightened accuracy or lethality and as a practical skill should bullets be banned or one day be in short supply.

“It gives me time to think,” said Gavin Gear, who runs a popular blog and YouTube channel called Ultimate Reloader, which offers instructional videos and reviews of reloading equipment. He described the process as a relaxing ritual, “not unlike a blacksmith making a knife or a samurai sword.”

But mostly, it comes down to saving money: Many people who cast bullets at home cited the price of ammunition, which, according to the Bureau of Labor Statistics, has steadily climbed over the past several decades and hit its highest price this year.

David Reiss, who has been casting his own bullets for more than 10 years, said that a box of 50 factory-made cartridges for a .38 special costs about $15, whereas he can reload the same number for roughly $4 in materials.

Some types of ammunition, such as .44 Magnum cartridges, can cost more than 50 cents per round. Typical target shooters might use more than 150 rounds at each range visit, while competitive shooters can use over 1,000 rounds every week.

Most bullets are made of lead, and obtaining this metal isn’t always easy.

There are car tires that have internal lead weights meant to stabilize the vehicles, and bullet casters customarily turned to their local mechanics to get cheap or free lead. But this source began drying up after 2009 when, because of pollution concerns, the Environmental Protection Agency and a coalition of automakers, tire manufacturers and retailers began a campaign to phase out the use of the metal for wheel weights.

According to the EPA, every year more than 1 million pounds of lead end up in the woods or waterways near roads when the weights fall off vehicles after they hit potholes or are involved in collisions. At least nine states have banned lead wheel weights.

Reiss, who also oversees membership for a bullet casters association, said that most of his members find lead online or by collecting fired bullets at gun ranges. Some scrap yards still sell lead for about 75 cents a pound.

Gunpowder is much easier to obtain. It sells for about $25 a pound, is readily available online or at sporting goods stores, and most types require no license, particularly for quantities smaller than 50 pounds.

Among avid shooters, a guiding principle is to avoid using guns made, bullets cast or cartridges reloaded by someone else. Faulty handiwork can cause serious injury or ruin a gun if a shoddy bullet jams or if a weapon is defective. Still, despite this stigma, dozens of boutique producers have popped up in the wake of an ammunition shortage that started about 10 years ago, selling these “remanufactured” cartridges, as they are called.

Douglas Haig, an aerospace engineer from Mesa, Arizona, ran one such business until he was charged with manufacturing the armor-piercing tracer ammunition that one of his customers, Stephen Paddock, used to gun down hundreds of people last year at a Las Vegas country music festival.

As with gun enthusiasts more generally, there is a strain of anxiety that runs through the community of DIY bullet makers and kit-gun aficionados. In online forums, they worry about the threat of big government intrusions, regulatory barriers, market shortages or price hikes that might limit their access to essential supplies like lead or gunpowder. The government wants to ban guns and “attacking lead manufacturing is one way they have,” wrote one person in an online forum a few years ago after it was reported that the last raw lead smelting plant in the country was closing. Storing lead is legal and worth doing, the writer added.

Vocal gun advocates also worry about being tarred by association with fringe elements, such as those who commit massacres, and the regulatory backlash that often follows. After several high-profile shootings this year, YouTube announced in March that it would ban how-to videos on making ammunition. And a few months later in June, the search engine Bing said it would no longer allow advertisements for products that “aid in the reloading process.”

There are subtle cultural and demographic differences within the community of homemade weaponry and ammunition. More retro than futurist, more low-tech than high-tech, casters and reloaders tend to be older and often retirees.

The average member in the Cast Bullet Association is a 55-year-old man, typically mathematically inclined tinkerers from professions where they used their hands, such as dentists, mechanics or surgeons, Reiss said. The members enjoy the engineering know-how and alchemy experimentation involved in a hobby that requires millimeter exactitude, tireless patience, and constant trial and error.

In contrast, those interested in creating printable guns are often younger and more internet savvy. Many also describe themselves as crypto-anarchists, like Cody Wilson, a Texas gun advocate who was recently blocked by a federal judge from publishing his schematics for a 3D gun online. Many have a reputation as proponents of open-source software and admirers of WikiLeaks and Edward Snowden, and of being frustrated by restrictions on speech.

“How do governments behave if they must one day operate on the assumption that any and every citizen has near instant access to a firearm through the internet?” a statement on Wilson’s site once asked. “Let’s find out.”

In a separate case, Wilson was arrested last month after being charged with sexually assaulting a minor.

Both parts of the community, though, share a staunch skepticism of the government and an ideological individualism that have long been hallmarks of the broader American gun ethos. Not unlike many supporters of President Donald Trump, many in this group think of themselves as social disrupters, questioning the relationship between citizens and their states. In their view, guns are not just a constitutionally protected right, but also a socio-historical symbol whose very purpose is to level the playing field.

In the past, law enforcement agencies have tamped down alarm from gun control advocates about emerging 3D technology by citing the homemade weapons’ lack of durability. The Bureau of Alcohol, Tobacco, Firearms and Explosives, for instance, released a video in 2013 showing one such gun, called the Liberator and made of a weaker type of plastic, exploding during its test firing. But these reassurances have come less frequently as the stability of the guns have improved and inventions like Crumling’s have become more available.

Not unlike the pepper spray that people buy and keep in their glove boxes or purses, printed weapons could be thrown away after a single use or several uses, he predicted.

“In this scenario,” Crumling said, “I could see the ammunition becoming the restricted item as opposed to the gun.”