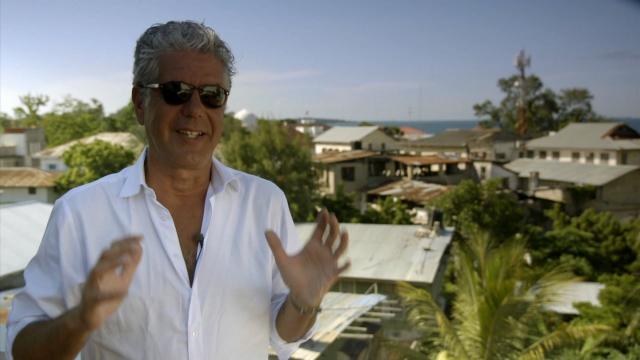 He shared noodles and beer with President Barack Obama in Vietnam, won accolades exploring the world and its tastes, and built a business out of his legendary palette. His body of work was as expansive as his appetite.

His book "Kitchen Confidential: Adventures in the Culinary Underbelly," published in 2000, was translated into more than two dozen languages. He produced a travel journal, three crime novels, a cookbook, a biography of Typhoid Mary and a graphic novel. His shows took him to more than 100 countries and three networks.

Bourdain took his own life at age 61, CNN said Friday.

From angry kid to happy dishwasher

He worked his first job in a kitchen at age 13, growing up in Leonia, New Jersey.

He attended Vassar College in New York for two years, then dropped out and enrolled in culinary school. For years, he worked as a line cook and sous chef at restaurants in the Northeast before landing a job as executive chef at Brasserie Les Halles, in Manhattan.

A best-seller that 'changed everything'

Bourdain's big break didn't come with a novelty dish or rapturous reviews of his food.

Instead, he caught widespread public attention with "Don't Eat Before Reading This," a piece he wrote for The New Yorker in 1999 about the secrets of life in the kitchen and the shady characters he encountered along the way.

"I came into the business when cooks still smoked on the line and wore headbands," Bourdain wrote. "In America, the professional kitchen is the last refuge of the misfit. It's a place for people with bad pasts to find a new family."

The article led to the best-selling "Kitchen Confidential," which was published in 2000 and launched Bourdain into a new career.

"When the book came out, it very quickly transformed my life - I mean, changed everything," he told NPR.

Bourdain first hosted "A Cook's Tour" on the Food Network, then moved to "Anthony Bourdain: No Reservations" on the Travel Channel. "No Reservations" was a breakout hit, earning two Emmy Awards and more than a dozen nominations.

The shows shared an indelible style: Bourdain traveled to far corners of the world and used food to tell stories about culture and identity.

"Tony changed the food media landscape," said Ed Levine, a former New York Times contributor and the founder of SeriousEats.com. "He introduced humanity and real emotion and poetry into food storytelling. His voice is irreplaceable."

CNN took a risk by bringing him to a news network to create a documentary series that examined cuisines, both around the world and in the United States, from Bourdain's distinctive cultural viewpoint.

The late David Carr, a media critic for The New York Times, wrote of the hiring: "Given his track record, chances are high that Mr. Bourdain's run of luck will continue, but we will have to wait to find out if that good fortune will also smile on CNN."

It did. Bourdain quickly became a face of the network, helping it expand beyond headlines to culture and documentary series. "Anthony Bourdain: Parts Unknown" premiered in 2013 and won five Emmy Awards and a Peabody Award.

The 11th season of "Parts Unknown" premiered in April. The lineup of destinations was vintage Bourdain: Uruguay, Armenia, Bhutan, Newfoundland and West Virginia, among others.

In a video for "Explore Parts Unknown," a digital partnership between Bourdain, CNN and the travel site Roads & Kingdoms, Bourdain once reflected on the demands of what he had built.

He talked about traveling more than 200 days a year, the double-edged sword of celebrity and the balance of being true to your voice without selling out.

In a philosophical turn, he gently mocked himself. Believing you have something to say to a television camera or in a book, he said, is "aberrant behavior."

"To believe something so unreasonable as, 'I have an interesting story to tell that total strangers will be interested in spending hours following. That ain't normal."

Still, he said: "I do have the best job in the world. Who am I going to complain to? The boss? That's me."

The suicide rate in the United States has seen sharp increases in recent years. It's now the 10th leading cause of death in the country, according to the American Foundation for Suicide Prevention. Studies have shown that the risk of suicide declines sharply when people call the national suicide hotline: 1-800-273-TALK

There is also a crisis text line.

The lines are staffed by a mix of paid professionals and unpaid volunteers trained in crisis and suicide intervention. The confidential environment, the 24-hour accessibility, a caller's ability to hang up at any time and the person-centered care have helped its success, advocates say.