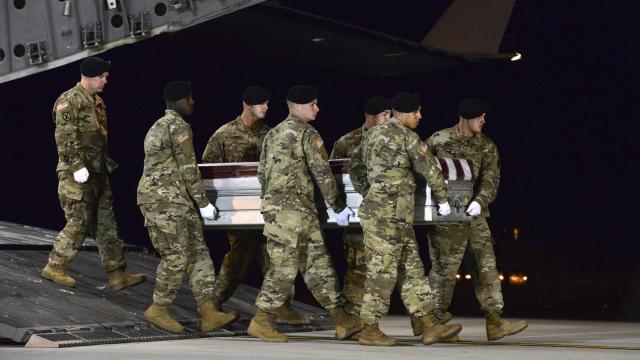 WASHINGTON — A draft military investigation into the deadly ambush of American soldiers in Niger in October calls for the Pentagon to scale back the number of ground missions in West Africa, and to strip commanders in the field of some authority to send troops on potentially high-risk patrols.

While U.S. troops will continue accompanying local forces on military patrols across West Africa and the continent’s Sahel region, the missions will be vetted more rigorously than they have been over the past year, according to two military officials with knowledge of the findings who spoke on condition of anonymity because the investigation has not been released.

Four Americans and five Nigeriens, including an interpreter, were killed in Niger’s remote southwest near the border with Mali in the Oct. 4 ambush. Militants there aligned with the Islamic State and al-Qaida have been increasingly active, sometimes vying with each other for dominance when not attacking Nigerien or French troops.

The draft investigation concludes that higher-level commanders — in Africa and in Stuttgart, Germany, where the U.S. Africa Command is based, and perhaps even at the Pentagon — must now approve certain missions that are considered particularly risky. Currently, commanders in the field can order and undertake such missions on their own authority.

The findings and recommendations in the draft report await final approval by Gen. Thomas D. Waldhauser, the head of Africa Command.

A spokesman for Africa Command in Stuttgart did not return a request for comment Friday.

The distance between military officials in Stuttgart and troops operating in African nations has long been a source of tension for U.S. forces assigned to Africa Command. Mission planning is often complicated by bureaucratic hurdles that ground troops have navigated, in part by understating threats in their respective areas, so patrols can be organized and approved at lower levels.

Officials with knowledge of the investigative report say it describes a string of errors and bad decision-making that, together, may have led to last fall’s ambush outside the Nigerien village of Tongo Tongo. Fallout from the deaths threw the White House into crisis and prompted Congress to demand answers about what the soldiers were doing before the attack.

The draft report also details a breakdown in communications that may have stemmed from a failure by members of the American and Nigerien team, and their superiors, to check their equipment before heading out on the Oct. 4 mission.

As the unit came under attack, soldiers were unable to speak directly to French air support who flew out to help. Instead, the soldiers’ location coordinates were relayed through officers in Niamey, the capital, more than 100 miles away.

Senior Defense officials initially said that the investigation into the ambush, conducted by Maj. Gen. Roger L. Cloutier Jr., the Africa Command’s chief of staff, would be concluded by January. The report is now completed and has been circulating in the Pentagon, Defense Department officials said. But its public release has been delayed until after Waldhauser appears before the Senate Armed Services Committee to present the command’s annual “posture hearing,” scheduled for the last week of February.

Defense officials said that the delay in part aims to keep senators from focusing on the Niger ambush during the hearing and, in turn, excoriating Waldhauser when he testifies before the committee.

Some current and former Pentagon policy officials and military commanders in Africa expressed skepticism about curtailing the training and advising missions in which U.S. troops accompany local forces on ground patrols in West Africa.

“I’m not sure retreating from programs is the answer,” said Brian McKeon, a former top Pentagon policy official who visited Niger in 2015. “If we’re not going to do that kind of training, why are we there?”

Officials said that the scaling back of those missions, as called for in the report, would not apply to Libya or Somalia, where the United States has been engaging with local forces to fight the Islamic State and the militant group aligned with al-Qaida known as al-Shabab.

The units, created about four years ago, train about 100 to 120 indigenous soldiers over roughly a two-year period. About a dozen U.S. special forces are assigned to each unit, and the training costs “a few million dollars” to complete, Bolduc said.

Accompanying the local soldiers on live training missions — up to just short of carrying out actual combat operations — is a key component and would be a mistake to curtail, Bolduc said.

“They are a crucial program,” Bolduc said in a telephone interview. “Those are our bread and butter.” For almost a month, the Niger ambush was at the center of a political storm in Washington following the deaths of Staff Sgt. Jeremiah W. Johnson, Staff Sgt. Bryan C. Black, Staff Sgt. Dustin M. Wright and Sgt. La David T. Johnson.

La David Johnson’s widow, Myeshia Johnson, said the president called her 12 days later and said her husband “knew what he signed up for,” even as Trump struggled to remember the slain soldier’s name. Rep. Frederica S. Wilson, D-Fla., who listened to Trump’s conversation with Myeshia Johnson, criticized the president publicly for his words.

Trump angrily disputed that account and sent his chief of staff, John F. Kelly, to denounce Wilson to White House reporters. Kelly did so, but further flamed the controversy by mischaracterizing unrelated remarks by Wilson in 2015.

Video released by a local newspaper then showed Kelly’s portrayal to be false. Within days, the deaths of the four U.S. soldiers in the remote West African semidesert had veered into the incendiary issue of race relations in the United States. Wilson is African-American, as is Myeshia Johnson and as was La David Johnson.

Some Defense officials fear that the Pentagon report, when it is released, could reignite last year’s imbroglio.

There are roughly 6,000 U.S. troops spread across Africa, the Pentagon said. This number can fluctuate for several reasons, including large training exercises and specific operations. Most of the forces, around 4,000, are at Camp Lemonnier, in Djibouti, the continent’s primary base of operations for Africa Command.