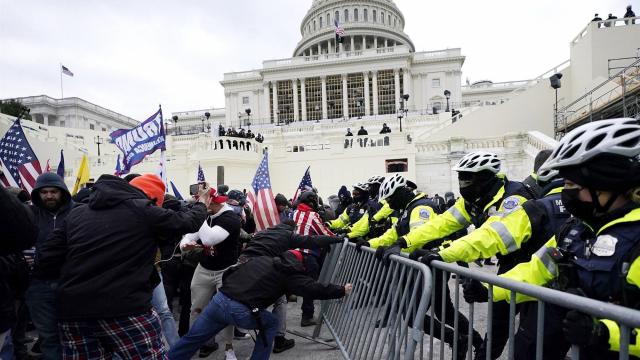 Raleigh, N.C. — One of the men indicted this week in an FBI investigation into the attack on the U.S. Capitol trained in North Carolina the month before, according to his indictment.

The mention is short, containing no further detail on location or the type of training. But it’s one of several North Carolina references contained in the Wednesday indictment of two people from Ohio and one from Virginia who are each charged with conspiracy in the Capitol riot and are all part of a loosely knit national militia group called the Oath Keepers.

In text messages about a week before the attack, one told another that he expected a busload of more than 40 North Carolina Oath Keepers to be in Washington, and that a person identified in the indictment only as "person three" would "have the goodies in case things go bad and we need to get heavy."

"He is committed to being the quick reaction force and bringing the tools if something goes to hell," Thomas Edward Caldwell said in text message, according to the indictment. "That way the boys don't have to try to schlep weps on the bus. He'll bring them in his truck day before."

FBI spokespeople, both in Washington, D.C., and North Carolina, declined to discuss the North Carolina references or say whether there is some sort of training camp in the state. The Attorney General's Office also declined comment, referring questions to the FBI. So did Gov. Roy Cooper's office.

The State Bureau of Investigation said it's "not currently conducting a criminal investigation related to the actions at the U.S. Capitol" and suggested reaching out to the FBI as well.

The FBI's press release on the indictment, one of many issued as federal authorities scoop up people involved in the Capitol riot, mentions multiple FBI offices and agencies assisting in the case, but none is based in North Carolina.

Eddie Caldwell, executive vice president and general counsel for the North Carolina Sheriffs' Association – he's no relation to the Thomas Edward Caldwell indicted in the case – said Friday that he'd not heard from any of the association's sheriffs that the FBI was looking at a location in their counties.

In another part of the indictment, a woman named Jessica Marie Watkins describes an Ohio training session to a recruit.

"I need you fighting fit by inauguration," she said, according to the indictment. "It’s a military style basic … with a Marine drill sergeant running it.”

According to the FBI, the Oath Keepers are a paramilitary organization that targets military and law enforcement veterans for membership. The indictment describes them as a "loosely organized collection of militia who believe that the federal government has been co-opted by a shadowy conspiracy that is trying to strip American citizens of their rights."

In the weeks since the Jan. 6 attack, the North Carolina Oath Keepers have publicly split with the national group, with one leader saying members were "horrified" by what they saw at the Capitol.

The news site describes Smith as a Whiteville resident who leads the state group now formerly known as the N.C. Oath Keepers. Smith told the site that his contingent went to Washington by bus and headed home by 4 p.m.

“The men of North Carolina believe that the National leadership (of Oath Keepers) could have stopped this and did nothing," Smith said of the Capitol riot. "The men and myself included can no longer be affiliated with Oath Keepers after this sad event in our nation’s history."

A WRAL News attempt to reach Smith on Friday was not immediately successful. He told the Columbus County News that his group trains so they can help law enforcement in times of civil disorder or natural disaster.

"The No. 1 reason our men train is to support law enforcement in North Carolina," Smith said. "The actions of a few others has shamed each man from our state, and they fear their reputations as law-abiding citizens has been sullied in our law enforcement brethren’s eyes."

The indictment charges Crowl, 50, Caldwell, 65, and Watkins, 38, with a number of crimes and lays out their online communications ahead of the attack. It states that, during the attack, 81 members of the Capitol Police and 58 members of the D.C. Metropolitan Police Department were assaulted.

The indictment indicates that some of those involved believed deeply in a conspiracy to remove President Donald Trump from office.

"I don't underestimate the resolve of the Deep State," Watkins said in one communication. "Biden may still yet be our President. If he is, our way of life as we know it is over. Our Republic would be over. Then it is our duty as Americans to fight, kill and die for our rights."