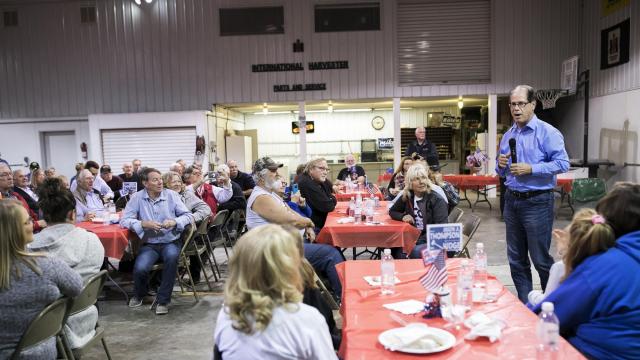 CARMEL, Ind. — Sen. Joe Donnelly is standing in the most dangerous place in American politics: the middle of the road.

Donnelly, D-Ind., is staking his re-election on a contrarian proposition that in a highly polarized era, there are still enough voters who believe in moderation to give him a second term. It worked six years ago when Donnelly, then a member of the House, won his Senate seat by portraying his Tea Party opponent as an unhinged man with road rage.

But 2012 feels like a distant era, and Donnelly’s Republican opponent, Mike Braun, is firmly aligned with President Donald Trump and is hurling insults in fine Trumpian fashion. On Friday, the Braun campaign was calling the senator “Mexico Joe” — he apparently was using a Mexican-made ax in a recent ad — and accusing him of currying favor with “socialist Bernie” Sanders, the Vermont independent.

The Indiana contest is one of the closest in the country and, like races in Missouri, North Dakota and Montana, it is emerging as a referendum on whether centrist Democrats still have sufficient crossover appeal to win in states carried by Trump.

Campaigning in the suburbs of Indianapolis on Thursday, Donnelly name-dropped Republicans far more than Democrats. He talked about working with John McCain in the Senate, with Rep. Susan W. Brooks of Indiana on local issues, and with the state’s Republican governor, Eric Holcomb. In a recent ad, he boasted of his support for Trump’s border wall with Mexico and President Ronald Reagan’s peace-through-strength foreign policy. “Socialized medicine,” he said, would pass Congress “over my dead body.”

But he also voted against Trump’s tax cuts, against the repeal of the Affordable Care Act and, most recently, against the confirmation of Justice Brett Kavanaugh.

Republicans expressed confidence that it was that last vote that would take Donnelly down, along with the continued popularity of the president in Indiana.

“The thing that took the whole energy level up was Judge Kavanaugh,” Braun said in a brief interview at a sparsely attended early voting kickoff rally in Anderson, a blue-collar town 35 miles northeast of Indianapolis. “It was an ugly process that exposed the underbelly of how Democrats run,” he said, adding that “it boosted all races across the country and especially here, measurably so.”

With Election Day barely more than two weeks away, the voters will soon render that judgment. And the “Kavanaugh effect” is anything but clear. His confirmation may well drive some suburban female voters to Donnelly, who said he thought Kavanaugh lacked the appropriate temperament for the nation’s highest court.

And both sides agree the contest here will most likely be decided by the votes of college-educated, Republican-leaning and independent women in the suburbs of Indianapolis, many of whom have recoiled at the Trump presidency.

“While I am sure he is qualified in many aspects, I almost feel like he is a clone of President Trump,” Gaya Bowers, a lawyer taking time off for her children, said of Braun. “And I want out of this midterm election to see the yin to President Trump’s yang.”

At a gathering with voters in Carmel, an upscale suburb that is a Republican stronghold with a moderate strain, one of Donnelly’s supporters simply said to him: “Just tell me you’re still a Democrat and then I’ll leave.” Donnelly obliged.

“I respect that man for being able to stand up, and I am thrilled he is from Indiana so I can point to my children and say that’s what I think Congress should be,” said Randi Rogers, who owns a small business in Carmel.

She compared Donnelly favorably to Richard G. Lugar, the former Republican senator from Indiana whose primary defeat in 2012 by a Tea Party conservative, Richard Mourdock, cleared the way for Donnelly’s victory. Other swing voters said they wanted to use their ballot as a check on Trump.

“The recent political climate has really pushed me to become much more partisan in a way that I’ve never been before, because I am not happy with the current presidential administration,” said Carrie Poehlein, a college guidance counselor at a private school in Indianapolis. She added, “I find Trump and his tactics to be particularly bullying and grandstanding.”

She said she agreed with some of Braun’s positions on issues but would be sending a message by voting for Donnelly.

Another suburban woman, Linda Esposito, a self-described independent who is retired, agreed. “I feel like I need to make my vote about the Trump administration — his lack of professionalism, his lack of respect, his willingness to divide the country and calling the Democrats the mob. It’s ridiculous.”

She added, “No one can look up to the president anymore.”

Missy Shopshire, a business consultant, shares the other women’s negative view of the president and said, “It’s really hard to be a Republican and a conservative right now, and even harder to be a woman and a conservative.” But she said she would not let that affect her Senate vote. “The bottom line for me is what I believe the role of government is. I am a fiscal conservative, so I want to keep government small,” Shopshire said. She will support Braun.

While Donnelly talks of being bipartisan, Republicans are not obliging. Donnelly may have cited his work with Brooks in recently passed legislation to combat the opioid crisis, and at the Republican early vote rally in Anderson, Brooks said she indeed had a great partner in the Senate. Then she named the other senator from Indiana, Todd Young, a Republican.

Braun is making no virtue of bipartisanship. He defeated two Republican House members, Luke Messer and Todd Rokita, in the Senate primary, which in many ways was a contest of which man was the more enthusiastic backer of the president. He has billed himself as a version of Trump, with softer edges, having built a business that has made him extremely wealthy. He has tried to run as an outsider, wearing a signature deep blue, button-down collar shirt with no tie or jacket.

Trump came to Indiana shortly after Braun’s victory to endorse him, and Braun said he was hopeful that the president would come to campaign for him again before the election Nov. 6.

“There’s a momentum shift to Mike Braun here,” said John Hammond, a member of the Republican National Committee from Indiana.

He also said that support for Trump remained high, but with a caveat. “There’s a really strong question whether the number of independent, Republican-leaning women voters who would go into the Donnelly column would be enough to overcome the highly motivated Trump base.” The electorate in Indiana has been changing steadily for years. Democrats used to rely on the votes of union workers at automotive plants in medium-size cities like Anderson. Those jobs have long been gone, well before Trump railed about trade agreements.

Such areas are now increasingly Republican, as voters without an advanced degree have gravitated to conservative appeals. “We have got to sell that what we are doing as conservatives has helped” the working class, Braun said.

But as those areas have waned, the suburbs of Indianapolis have flourished. The population of Carmel, where 70 percent of the adults have at least a bachelor’s degree, rose from about 25,000 in 1990 to more than 90,000 today. In nearby Fishers, which now has two high schools and an Ikea store, the rise has been even more significant, from 10,000 in 1990 to more than 90,000 now.

For Donnelly, that makes for fertile territory. He has made 70 campaign appearances in the Indianapolis suburbs, and more than 30 in Hamilton County, where Carmel and Fishers are thriving.

The race has had a highly negative tone, with more than 114,000 ads aired — the most in the nation so far, according to the Wesleyan Media Project. Donnelly said he would not apologize for fighting back. “If you throw a fastball at my head, I am going to throw one twice as fast at your head. I am not going to take it.”

But mostly, he has tried mightily to persuade voters that he is a “Regular Joe,” traveling the state in an RV, sometimes wearing flannel shirts, addressing crowds with an empathetic bearing.

In the end, the result may well be determined by the president as much as the candidates.

Robert T. Grand, a lawyer-lobbyist in Indianapolis and a leading Republican, said that he had women tell him they were “appalled” by the treatment of Kavanaugh, and that would help to motivate them to vote for Braun.

But he also noted: “This is a referendum on the president, no question. And presidents don’t do well in midterms. That’s history, and it doesn’t matter who the president is.”