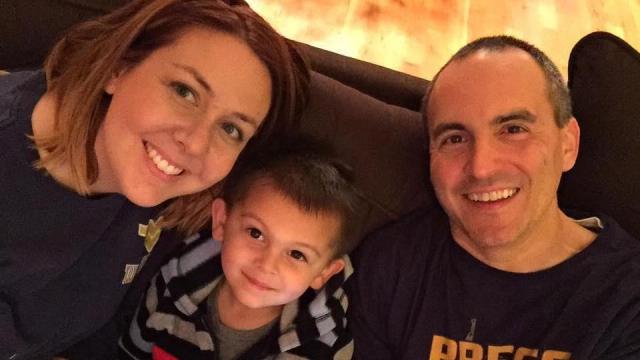 By Kathy Hanrahan, Out & About editor

Anyone who has done IVF is probably familiar with ovarian hyperstimulation syndrome (OHSS)​. It can happen when you take medications to stimulate your ovaries and produce a lot of follicles for IVF.

I wasn't too familiar with it until it happened to me. When we were preparing for egg retrieval, my estrogen levels were a little high during my first blood draw. My doctor said I was at risk for OHSS and had me order a new trigger shot just in case I couldn't use the HCG one. OHSS feeds off HCG or the pregnancy hormone.

My estrogen levels didn't climb much, and I was able to do the HCG trigger for my egg retrieval. I thought I was out of the woods, but apparently not.

After four days of incubating my fertilized eggs in my Invocell device in my body, I was a mess.

I was taking a steroid, antibiotics, melting estrogen under my tongue twice a day and doing nightly progesterone shots. And doing all this while I had a diaphragm (which was holding the Invocell device in) sitting on my pelvic bone causing extreme pain. I couldn't sit down and could only lie on my stomach to sleep.

I started having very bad cramping about 24 hours before my scheduled fresh embryo transfer. I saw the doctor who said things looked fine, but my left ovary was a little big and riding high in my uterus. That was likely the reason for the cramping. She tried to adjust the diaphragm which offered some relief. Since I was so fatigued, she opted to do some blood work as well.

I got a call from my doctor that evening saying that my white blood cell count was really high. She feared I was starting with OHSS and wanted to repeat blood work the next morning. Our transfer wouldn't happen the next day unless those numbers looked good. She also noticed I was dehydrated and needed fluids ASAP.

I panicked and downed 24 to 30 ounces of water in an hour. I almost made myself sick trying to hydrate. Throughout the night, I made sure to drink water and Gatorade. I had so much fluid in me that I could have floated my way to the blood test the next morning.

Whether or not we were doing a fresh transfer, that Invocell device was coming out and we would be finding out if we had any good blastocysts. I was so afraid that they would open that device and find no good blastocysts to transfer. That we would have done all this for nothing.

I had to stay positive.

My blood was drawn and when the device was removed I felt like a giant weight had been lifted from me. I could sit comfortably again. Before we were even out of the surgical room, Robin (who so kindly retrieved my eggs five days prior and put them in her nest) stuck her head into the room to give a thumbs up. There were good blastocysts in there.

The doctor said it would take maybe 20 minutes before we knew how many blastocysts, but she came back with the news that there were five!

While we went home contemplating whether to transfer one or two embryos, the lab would await my blood work. We were told to stick by the phone and plan for a possible early afternoon transfer.

I felt a little light-headed, crampy and nauseous. I attributed it nerves, but that wasn't it.

Within two hours we had a call from the doctor. My white blood cells were still high and my liver enzymes were off. Something was wrong and she believed I was dealing with OHSS. She didn't recommend a fresh transfer. So we had them freeze the eggs.

​Things were put on hold - at least for now while my body recovered from this overstimulation. I needed to hydrate, take more antibiotics and rest. OHSS could last for up to 10 days after the trigger shot and if I had done the transfer and gotten pregnant, it would have fed off that HCG hormone and gotten worse.

Waiting meant a much-needed break from shots and hormones, but also a chance to regroup and prepare for the next step.

Have you dealt with OHSS?

Kathy is a mom of one and Out & About editor for WRAL.com. She writes for Go Ask Mom about her experience with secondary infertility.