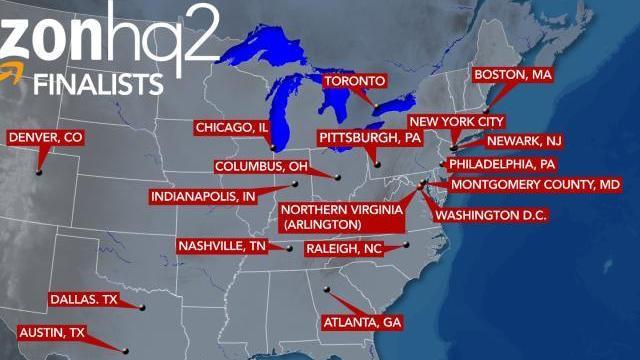 Raleigh, N.C. — North Carolina has a not-so-secret weapon in its hunt for Amazon's and Apple's new campuses – and for any other companies in a tech industry that says it is hungry to reverse a poor track record on diversity: arguably the nation's largest system of historically black colleges and universities.

North Carolina has more HBCUs than any state but Alabama and a particular reputation for technology programs. North Carolina A&T State University in Greensboro produces more black engineers than any school in the country, according to Diverse: Issues in Higher Education, which has been tracking issues like this for years.

"If Amazon and Apple are looking to hire more African-Americans and to diversify, it would be smart to come to North Carolina," said Marybeth Gasman, a University of Pennsylvania professor who studies minority-serving institutions.

Gov. Roy Cooper brought the issue up unbidden earlier this month, saying HBCUs "have been key to our recruiting process."

"A lot of these companies are looking for diversity," Cooper said. "Not only can we provide them talent in North Carolina, we can provide them with the diversity that they seek, along with a lower cost of living, the great quality of life and all of the attractions that this state presents."

Amazon and Apple have been tight-lipped about their expansion searches. Amazon plans a second headquarters with up to 50,000 jobs. Apple wants a new campus as part of a broader plan to add up to 20,000 jobs. The tech industry is under pressure to lift low percentages of minority employment in the sector, and Apple announced plans three years ago to give $50 million to nonprofits that will train more women and minorities for tech jobs.

Amazon has said it's putting $60 million into a similar effort on coding.

Black people hold less than 5 percent of jobs overall in the tech industry, according to Andre Perry, a fellow in the Metropolitan Policy Program at the Brookings Institution. He listed Raleigh among five cities, out of Amazon's 20 announced finalists, that the company should look to if it's serious about advancing diversity.

The other four were Los Angeles, Denver, Austin, Texas, and Nashville, Tenn.

"The tech field is under an enormous amount of pressure to diversify," Perry said. "It's no surprise that many are looking to HBCUs. So, those cities that have HBCUs close by ... they're going to have a competitive advantage. They may not say that, but I think it's clear."

North Carolina campus officials and professors who spoke to WRAL News said they've not been involved in formal recruitment efforts, and they haven't had a search delegation from Amazon or Apple on campus, to their knowledge. Cooper said he "cannot guarantee that they have physically visited," but he said the state has had representatives from HBCUs in meetings with companies. He declined to say which ones but said executives are "absolutely" attentive to the pitch.

"They want a more diverse work force," he said.

Two weeks of attempts to arrange interviews with N.C. A&T officials through the school's media office for this story were unsuccessful.

Donna Grant, who chairs the computer information systems department at North Carolina Central University in Durham, said an Amazon digital manager visited in February and met with students. It's not unusual for companies to send someone to campus, but this effort seemed particularly sincere, Grant said.

"She called me," Grant said. "I don't know where she got my name. ... Sometimes people come out and they leave, and there's no engagement. She's engaged."

Gasman said N.C. Central is one of the reason's North Carolina's HBCUs are seen as strong players in the STEM fields. She said N.C. A&T is "really a powerhouse" in the area, and Fayetteville State University "is really gaining."

Fayetteville State Chancellor James Anderson said that, of his school's 1,100 graduates last year, perhaps 200 were in the tech sector. He said he hopes development officials are mentioning HBCUs in their pitches, but he doesn't see this putting North Carolina over the top with Amazon or Apple.