In Ukraine, a Successful Fight for Justice, Then a Murder 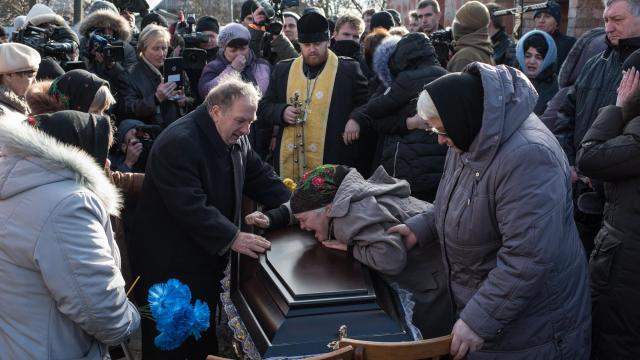 KIEV, Ukraine — Though she had taken on many clients as a human rights lawyer and anti-corruption activist, Iryna Nozdrovska became famous fighting for justice for her own sister, killed two years ago when she was struck by a car driven by the nephew of a powerful judge.

Nozdrovska eventually succeeded in putting the driver behind bars, winning praise in the Ukrainian news media for achieving an important victory for the rule of law. But the case took a grim turn on New Year’s Day, when her body floated to the surface of an icy, shallow river outside of Kiev. She had been stabbed.

The murder comes at a pivotal time, as Ukraine wavers between a long-promised overhaul of the government along Western democratic lines and a return to post-Soviet politics as usual. It is a tug-of-war that has repercussions far beyond Ukraine, as the country has become a decisive prize in the reviving struggle between Russia and the West.

Court reform is now at the top of the agenda of Western donors to Ukraine. The European Union last year withheld $718 million in aid because the government failed to create a system for checking officials’ assets for signs of bribes. The International Monetary Fund had already halted disbursements as President Petro O. Poroshenko’s government, wary of losing control over the judiciary, has failed to establish an independent anti-corruption court.

Nozdrovska’s struggle for justice for her sister had become a symbol of the fight against Ukraine’s deeply rooted corruption, and was featured in television documentaries and articles in the local news media.

It began when her sister, Svitlana Sapatynska, was walking to work in her village, Demidov, not far from Kiev, and was struck from behind by a car driven by Dmytro Rossoshansky. He had previously been arrested for car theft, robbery and driving under the influence, but had walked free every time.

Nozdrovska, who was 38, argued in her appeals that the police, aware they had detained the relative of the district chief judge, Sergei Kuprienko, delayed testing Rossoshansky for drugs or alcohol for eight hours, allowing him time to sober up.

A judge working under Rossoshansky’s uncle paid no heed to the bungled police investigation and released the young man on bail.

“Rossoshansky had influence and connections,” said Volodymyr Timofiychuk, a journalist who covered Nozdrovska’s crusade on Ukrainian television. “This was all done quietly.”

Nozdrovska appealed to higher courts to transfer the case from the district where the uncle held sway and then for a new trial, arguing that the police had falsified evidence while the local court looked the other way.

Nozdrovska, fought tirelessly while judges serving under the man’s uncle dragged their feet. As the case went on, the powerful family of the accused openly threatened her with violence.

“'I will win this case if it costs me my life,'” Nozdrovska told a friend and fellow lawyer, Tamila Ulyanova, who did not take the statement literally.

Finally, at a hearing on Dec. 27, with her elderly parents in the courtroom holding photographs of the dead sister, Nozdrovska did win. A judge accepted her argument of official misconduct and ordered a new trial for Rossoshansky.

After that final hearing, Rossoshansky’s father, Yuri Rossoshansky, told Nozdrovska that “this will end badly for you,” Mustafa Nayyem, a member of Parliament who has followed the case, wrote.

“It’s almost a cliché case, where a relative of a judge avoids punishment and the person who tries to fight this injustice is herself punished in the most horrible way,” said Mykhailo Zhernakov, a former judge and director of a judicial reform group, Dejure.

On Monday, the police announced they had detained a suspect, identified by the newspaper Ukrainska Pravda as the father, Yuri Rossoshansky, but there was no immediate indication of progress in untangling the abuses in the local court.

A lawyer representing Dmytro Rossoshansky, Igor Eismont, denied that his uncle had meddled in the case. “Nobody helped him,” Eismont said. “Even I, his lawyer, could not help him. He was convicted.”

The lawyer declined to comment on the reported arrest of Yuri Rossoshansky, other than to note that the father had not specifically threatened to kill Nozdrovska. “He never said exactly, ‘I will kill you,'” Eismont said. The new anti-corruption court demanded by the International Monetary Fund and other Western donors would threaten the Soviet-legacy system of “telephone justice,” in which a phone call from a politician is all it takes to fix a verdict. In exchange for fealty to the executive branch, judges are given carte blanche to take bribes, rule in favor of relatives and run businesses on the side, said Zhernakov.

In a survey last year, an almost impossibly low 0.5 percent of Ukrainians said they trusted Ukraine’s judges. In recent rulings, judges have let off a string of officials charged with seemingly solid evidence of corruption, like the prosecutor who was caught with a trove of diamonds and cash at home.

In her work, Nozdrovska had looked into corruption in state tenders and testified against a member of Parliament, making plenty of enemies along the way and exposing the rot still in the judicial system years after Ukraine’s pro-European swivel. She did much the same in her struggle for justice for her sister.

Inspired by her mother, the young woman is studying law at a Kiev university. “My mother was a fighter,” she said.

Diminutive and understandably afraid for her life, despite an armed guard provided by the police, Anastasia Nozdrovskae wore a black sweatshirt and spoke barely above a whisper.

“She always fought injustice in this country,” she said. “She wanted me to be a fighter, too.”