In Toronto, a Restaurant Puts Mexican Cuisine on a Wood Fire 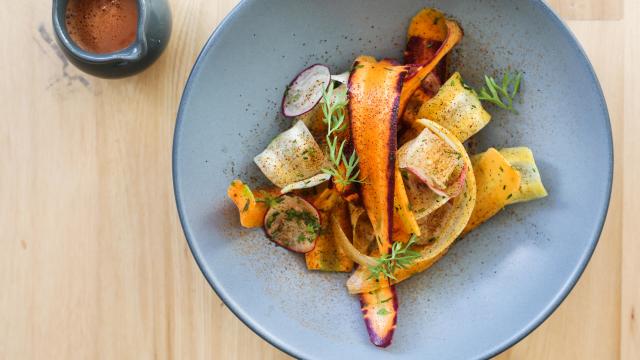 The salsas — all nine of them — arrived as a separate course at Quetzal, a new fine-dining Mexican spot in Toronto’s Little Italy neighborhood. Smearing each one on the freshly made tostadas revealed the sheer diversity of Mexico’s regions through their textures and tastes: smooth avocado, chunky roasted tomatillo, the earthy spectrum of dried chilies, ground chicatana ants and the black depths of a mole negro riff.

The dish, like Quetzal’s greater ambitions, is a showcase of the sheer variety of ingredients, and the expense and effort that are required to make complex Mexican food.

The restaurant is a five-year project of the husband-and-wife chefs Julio Guajardo and Kate Chomyshyn, who teamed up with Owen Walker and Grant van Gameren, one of the city’s most successful restaurateurs. They had previously worked together with Van Gameren in Toronto on the mezcal bar El Rey and the vegan Mexican restaurant Rosalinda.

Inspired by their many travels throughout Mexico, as well as Guajardo’s upbringing there, the chefs are careful of the authenticity trap. Like the salsas, there are no original recipes when it comes to Mexican cooking, just endless variations on the form, depending on region and cook, Guajardo said. Local ingredients inform their cooking just as much as Mexican flavors and techniques, like fresh heirloom tomatoes accented by crispy chapulines (grasshoppers).

Smoke is often said to be the secret Mexican ingredient and everything here is cooked on a wood fire. The long, narrow space, all white and wood, with low, curving ceilings meant to evoke those of a hacienda, is split in two. The restaurant’s 72 seats run parallel to the open kitchen, which is dominated by a 26-foot-long grill — a toasty chef’s bar gets you close to the heat.

Everything is diligently made in-house, from the fruit liqueurs for their creative mezcal and tequila cocktails to the Oaxacan corn they import and grind themselves. The menu hops around Mexico and currently highlights Oaxaca, the Yucatán and Baja California. There are a handful of ceviches, including one with strips of heirloom carrots and radishes spiked with a spicy sal de gusano (dried and ground maguey worms).

Rarer corn dishes like tlacoyos, tetelas and tlayudas are cooked on a clay comal griddle. These hand-foods, like the oval tlacoyo, stuffed with requesón cheese and poblano pepper with a side of chanterelle mushrooms, reveal how bland our homogeneous corn tastes. The tortillas are some of the best in the city, though they are still improving.

Green and toluqueño chorizo sausages are seared on the grill while deeply flavorful sweet potatoes and beets are roasted in the coals. From the section of larger, shared plates, we opted for the barbacoa. Lacking an earthen pit, here they wrap lamb neck in banana and avocado leaves and roast it in the wood-fired oven for five hours. The cut, rich and fatty, evokes how one would normally eat the whole animal. We enjoyed pulling it apart with our fingers and making tacos with the array of salsas. Guajardo said, “The whole idea of Mexican food is getting together, sharing and having a good time. You got to grab it with your hands, get dirty a bit.”

For dessert, there was a chocolate mousse cake inspired by the tascalate drink the chefs had in Chiapas. Made with cacao, toasted tortilla, achiote and pine nuts, it was smooth and complex, and showed how Mexican ideas can translate and transform. “Mexico is very regional,” Guajardo said. “That is what attracts us. We know so little still. It gives us so much longevity and learning.”

Quetzal, 419 College St., Toronto; quetzaltoronto.com. An average dinner for two, without drinks or tip, is 165 Canadian dollars, or about $126 at current exchange rates.