In these 'very dark times,' Jane Goodall explains why she is still hopeful 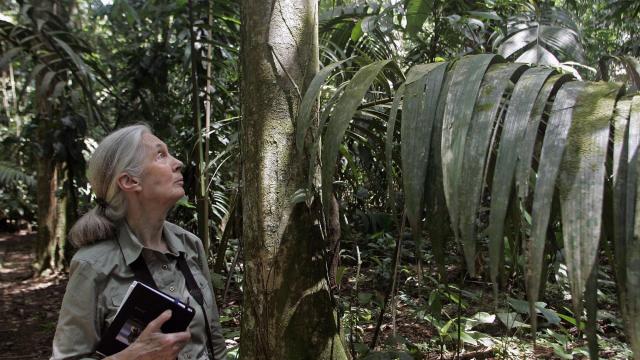 By Becky Anderson and Sophie Tremblay

CNN — Jane Goodall will be turning 86 this year, but she shows no signs of slowing down.

In fact, there's a renewed sense of urgency to her activism. Her days are packed with meetings with world leaders, visiting conservation projects, supporting her Roots & Shoots movement and sharing her message with anyone who will listen.

She recently sat down with CNN's Becky Anderson in Dubai where she was giving a keynote speech at the Emirates Airline Festival of Literature. Here's their conversation:

Becky Anderson: You travel an astonishing 300 days a year. You're here in Dubai on what is a global tour. What is your message?

Jane Goodall: We're going through very dark times: socially, politically and especially environmentally. And lots of people are kind of losing hope, because you get this message, think globally, act locally. But if you think globally, you get really depressed. So, the message is about acting locally. And the main message is that each one of us makes some impact on the planet every single day.

Anderson: What do you think the single biggest threat to the environment is today?

Goodall: People will say it is the climate crisis, which is true, but that's because of so many things impinging. We need people to address each of the pillars that have led to climate change, like our industrial agriculture, our reliance on fossil fuels and this intensive animal farming that creates all this methane that leads to all these greenhouse gases, the destruction of the forest — apparently the equivalent of a football pitch amount of forest every minute around the world — and then you get the pollution of the ocean, which is the other lung of the world, and both of them absorb carbon dioxide and give out oxygen. But the ocean is now kind of supersaturated.

Anderson: In just the past couple of months, we've seen these incredible bushfires in Australia.

Anderson: We are seeing rising temperatures everywhere around the world. There are those who say these are the result of climate change, or at least are exacerbated by climate change.

Goodall: By our activities.

Anderson: You've seen that over your lifetime.

Goodall: Absolutely. I've stood in Greenland with Inuit elders and seen the ice melting on that great ice cliff. And they said even in the summer, the ice used to melt here. Kilimanjaro, you remember the snows of Kilimanjaro? There's hardly any snow left on the glaciers, almost gone. And that's the same all around the world. I've met people who've had to leave their island homes because of high tide, because of rising sea levels. It's not habitable anymore. All these refugees, refugees aren't just fleeing violence and war. They are fleeing areas which have become uninhabitable for them and their livestock.

Anderson: If you take us back to you as a mid-20s young lady out in Kenya and Tanzania, could you have ever imagined we would have got to where we are today, in such a climatic crisis?

Goodall: Absolutely not. Because you know, back then, the animals were all there. They were walking on the roads. There were virtually no paved roads in Nairobi. It was a very, very different Africa. It was the Africa I dreamed of when I was 10 and fell in love with Tarzan. I left Gombe, my chimpanzee study, in 1986, having realized that chimpanzees and forests were vanishing across Africa, and realizing I needed to do something. And part of that was going around the planet, talking about those problems and learning more at the same time about what we've done to harm this planet. The crazy thing is the biggest difference between us, chimps and other creatures is the explosive development of the intellect. So how come the most intellectual creature ever to walk the planet is destroying its only home?

Anderson: What do you put that down to? How come?

Goodall: We're putting economic development ahead of protection of the environment. We're forgetting we are part of the natural world. We depend on it. And we're in the middle of the sixth great extinction, because of all the pollution and harm that we've done, and we don't seem to realize that if we go carrying on as though we can have unlimited economic development on a planet with finite natural resources, it's going to be us extinct as well.

Anderson: Your activism is legendary. Talk to me about what you are doing personally and the groups that you have around you. Roots & Shoots, for example.

Goodall: I was meeting so many young people who seem to have lost hope. They were either apathetic, most of them, angry, depressed, and they said, well you've compromised our future and there's nothing we can do. Well, that was where I thought, yes, we have compromised their future. We'd been stealing it, actually. But there's still a window of time. I don't know how big it is and it's closing. But if we get together, we can start healing the harm and at least slowing down climate change and species extinction. So, Roots & Shoots has its main message, every one of us makes a difference every single day. They're planting trees, they're cleaning streams, they're lobbying, they're writing letters to Congress people or whatever government they happen to be in. They're actually taking action.

Anderson: The most powerful country on earth, the United States, right now has a president who has pulled the US out of the Paris Climate Accord. He has rolled back so many federal environmental policies. What power do people have to really change things if and when the power is in the hands of a leader who doesn't care?

Goodall: He does care about himself and he does care about his economic development. So, what can one do? Well, we've got an election coming up in the US. People can vote and a lot of people have become apathetic about it, but people must vote.

Anderson: Is there someone who you believe should lead the US, who would have a better grasp on the environment or conservation and climate change than Donald Trump?

Goodall: Almost anybody. No, I'm not going to go there because I'm not American. I'm British. We're in a mess with Brexit.

Anderson: We're at the beginning of 2020. I wonder what your New Year's resolution was and what you might ask others to do this year.

Goodall: My resolution is always the same. I'll try and leave as light a footprint as I can each day. And I know I fly a lot. And I actually said to Greta [Thunberg], "You know, I have to fly." And she said, "Yes you do. It's OK." And last year our Roots & Shoots groups around the world planted 5½ million trees and saved forests and woodlands. So, that doesn't make me totally satisfied, but at least it's more than absorbing my bit of carbon. But what I hope people will do is to think about the consequences of the small choices they make each day. What do you buy? Where was it made? Did it harm the environment? Did it result in cruelty to animals like eating meat? Is it cheap because of child slave labor? So, if everybody makes these ethical choices, we start moving towards a better world.

Anderson: You've had the most remarkable life and you continue to ensure that people hear this message about conservation. When all is said and done, Jane, what do you want your legacy to be?

Goodall: It's a double one. First of all, starting this Roots & Shoots movement, because it's changing the world every day as we speak. And it's giving young people hope, and it's giving them a sense of empowerment. And secondly, when I'd been two years with the chimps, knew them all as individuals, saw their amazing behavior, know that they resemble us in their genetic makeup by 98.6%. And yet I got to Cambridge after two years and many of the professors told me, Jane, you've done everything wrong. The chimps should have numbers and not names and you can't talk about them having personalities, minds or emotions because those are unique to us. I was told it was a difference in kind. It's not true. So, then they had to look and say, OK, it's not just the chimpanzees: It's the gorillas, it's the orangutan, it's the baboons, it's the monkeys it's the elephants, it's the lions, it's the dogs and the camels. So, it's changed science in the way that today a student can study animal emotion, study animal personality, and there's a flurry of studies on intellect.