In the Carolinas, congregations offer spiritual, and dry, shelter

Get help, give help | Lives claimed by Florence

Services at Manna Church, a big nondenominational congregation on the west side of town, began at 9 a.m. with announcements:

“They’re setting up showers in the back.”

Pastor Michael Fletcher, standing at the entrance, welcomed the pilgrims arriving out of the pounding rain: A man with his belongings gathered in a soaked towel on his back. A grandmother fleeing her probably flood-doomed house, along with her daughter and five young children.

The largest church in Fayetteville had become the city’s eighth official storm shelter.

As Sunday dawned grimly in the Carolinas, the heavens opened for the fifth straight day, swelling rivers past record-breaking levels and drenching already half-drowned towns. But, it being Sunday, the congregations were still at work in one of the most church-steeped parts of the country, even if many religious services were canceled because of flooded sanctuaries, dangerous roads and scattered parishioners.

From the first moments of the rolling disaster of Florence, there has been no sharp divide separating the official responders, the victims and the houses of faith. 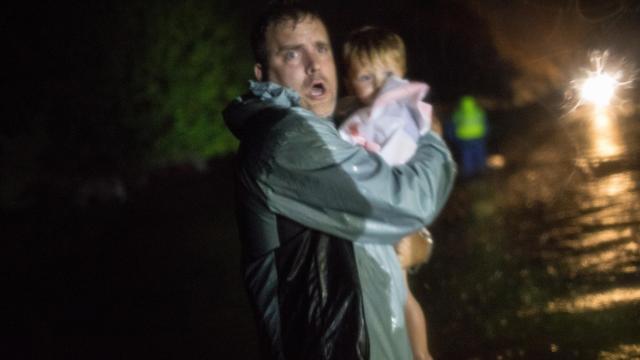 The South Carolina governor’s office began a storm briefing with a chaplain talking of Elijah’s tests of faith.

The sole mosque in Burlington, North Carolina, has been open as a shelter, handing out water, food and blankets. So have other mosques from Georgia to Virginia.

The Southern Baptists have revved up their extensive response operation, preparing to cook tens of thousands of meals in mobile kitchens and deploying workers with chain saws and shower units to command posts along the coast.

“It’s easy to say, ‘I love God,’ but put on your boots, get your hands dirty,” said Jim Pennington, senior pastor of Temple Church in flood-sunk New Bern, North Carolina, who spent much of Friday in a kayak, teamed up with a man in a flat-bottomed johnboat, paddling around and pulling about 30 people out of the water.

Temple was the command center for a 60-strong contingent from the North Carolina Baptist Men, the disaster-relief arm of the state Baptist Convention. They did have worship service on Sunday, such as it was: 80 people in a hall that is usually filled with more than a thousand, where big chunks of the roof had fallen in over the stage.

Before the service, about a dozen men in hard hats were helping assemble a food trailer in the parking lot. Jimmy Lawrence, a retired garage mechanic, stood at a picnic table, tracing a waterproof map. He pointed to parts of the town with the worst flooding and told a pair of fellow Baptist volunteers which neighborhoods to visit. He instructed them on how to assess homes for flood damage, and how to ask homeowners if they needed a tree cut or a home gutted.

Lawrence told the volunteers to tell any victims they encountered that they were not alone, that God was with them. He also warned the men about the second wave of flooding that was soon to come.

“This is not likely to be one of them fast-washin'-down-the-mountain things,” Lawrence said, echoing the calls for continued vigilance from public officials across the region. “In an hour or two, you might not be able to get out.” 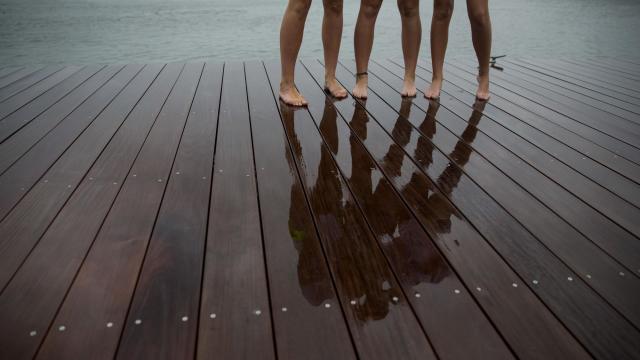 Lawrence has been doing this kind of work for 20 years. “Our big thing is witnessing to the homeowner and telling them somebody’s here, that they’re not alone,” he said.

Florence, the hurricane turned tropical storm, has prompted a week of intense prayer all over the coast, in the corners of crowded storm shelters and from the lecterns of top officials. There is little to distinguish the expressions of faith among those miraculously spared and those facing the loss of everything, and little to separate the assurances of people of different faiths.

As the first harsh bands of rain began lashing Greenville, North Carolina, Asif Daher, 40, stood at the counter of his restaurant, Bateeni Mediterranean Grill, one of the few places in town that were still open. Food was free for anyone helping out with the hurricane, said Daher, a Palestinian immigrant, because the Quran defines the righteous as those “who give charity out of their cherished wealth to relatives, orphans, the poor, needy travelers, beggars,” and the like.

“It’s part of our religion to help wherever we are,” he said. There was a stack of Qurans in the corner, and a sign offering them for free as well. As the storm moved over the central Carolinas, roughly 60 people gathered for a Saturday night dinner of chicken bog, sweet potatoes and green beans at the New Ebenezer Baptist Church in Florence, South Carolina.

“We are a church of action,” said Marcus Simmons, who oversees the evangelism ministry at the church, which had opened its recreation center as a shelter. “We believe that, unless we do it and show you that we mean what we said, then how can we even hold ourselves or hold you accountable?”

Nearly every statement had traces of metaphor: of the trials in life, of how troubles pass like storms, of churches as places of safe harbor.

“It’s important to remain one and pray as one, so that we can defeat any challenge that comes about,” said Luvia Grant, who was at New Ebenezer with her husband and seven children. “We’re stronger in numbers than we are apart.”

Some of those who rode out the storm had done so because they were sure they would be protected by their faith — only to find, as they sought rescue, that faith works in mysterious ways. Others saw proof in their deliverance. 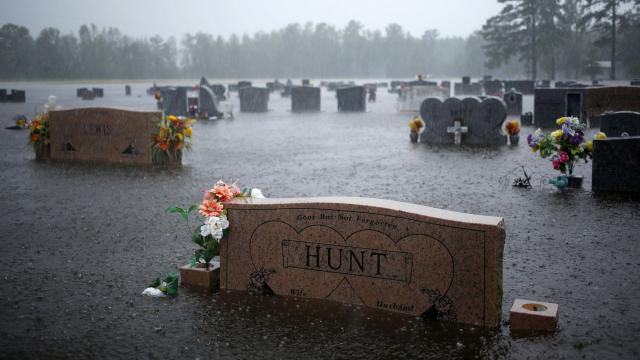 Dian Edge told her family that God had instructed her in a dream to wait out Hurricane Florence in her little wooden farmhouse, surrounded by soybeans and peanut plants, down near the South Carolina coast. The storm came down, the contents of the freezer were emptied — sausage, turkey, rotisserie chicken — and by the light of kerosene lamps, the family bided their time.

Mike Edge, 22, kept vigil, his guns at hand; Meghan, 28, a granddaughter visiting from Boston, stayed in contact with the outside world on her laptop; Dian, 71, the matriarch, prayed and read Psalms aloud to the dark house as a wind-whipped sycamore tree tore at the roof.

“She’s reciting the Bible,” the younger Edge said by phone in the middle of the storm, “and keeps saying evil can’t penetrate God’s word.”

Florence, at least, did not penetrate their house, though the roof suffered considerable damage. The morning after, some members of the church brought the Edges a thermos of hot coffee and some ham sandwiches. The devotion does not let up with the weather.

Billy Layton, who moved to Lumberton, North Carolina, nearly two years ago to rebuild flood-damaged houses with the North Carolina Baptists on Mission, was planning to move on by the end of the year.

He had been leading this nomadic lifestyle for nearly a decade, following disaster after disaster, and was ready to get to some long-delayed repairs on his own home. On Saturday night, with Lumberton looking more and more as if it would be flooded even more severely than it had during Hurricane Matthew, Layton contemplated the question he would soon face: whether to stay in the area on his now indefinitely prolonged mission.

“Probably would,” he said.

Still, on Sunday, as the rain continued to fall in torrents and the towns filled up, that was a question for later. At Manna Church, where the operation was humming with cheerful redshirted volunteers serving pasta and arranging air mattresses, there was little idea of what the next few days would bring. The church would take in as many people as they could, said Fletcher.

“And then come Sunday,” he said, as if considering the next week’s service for the first time, “we’ll wing it.”