In ‘The Brutes,’ the Actor Who Would Be an Assassin 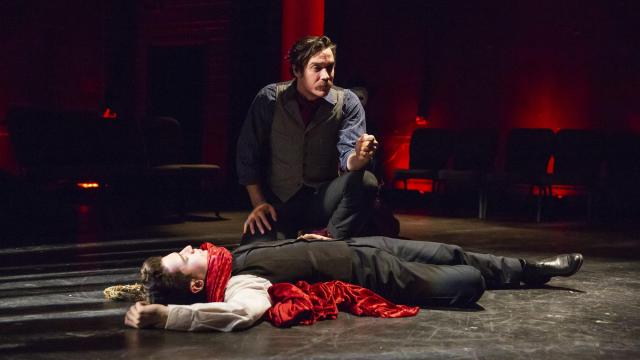 NEW YORK — On the late November night in 1864 when a band of Southern rebels lighted blazes all over Manhattan, trying to burn the city down, the Booth brothers were onstage in Greenwich Village, doing a benefit performance of Shakespeare’s “Julius Caesar.” Great actor Edwin Booth, who for a few more months would be the most famous of the siblings, calmed the audience of thousands when the fire alarm rang out.

He was starring as Brutus that evening, while his brother John Wilkes Booth — not yet President Abraham Lincoln’s assassin, not until April — played Marc Antony, with their older brother Junius Brutus Booth Jr. as Cassius. In retrospect, it’s an irresistibly dramatic scenario: siblings who split between the Union and Confederate sides in a violently divided country, enacting a tragedy about political conspiracy as a real-life plot bursts into flames around them.

This is the tale that Casey Wimpee’s “The Brutes” tells, in a Spit & Vigor production at the New Ohio Theater in the West Village. Directed by Sara Fellini, it would seem potentially well matched to both this time of year and our foully antagonistic national mood. But even when the Booths sit down together for Thanksgiving dinner, and Wilkes, as they call him, provokes a fight about the war, this labored, fragmented play remains frustratingly inert, weighed down by a surfeit of story.

Hamlet was one of Edwin Booth’s greatest roles, and in “The Brutes,” Edwin (Adam Belvo) keeps encountering the drunken ghost of his famous actor father (Eamon Murphy) backstage, stalking around like Hamlet’s dead dad. These bits and the plentiful excerpts from “Julius Caesar” feel, even if you know both plays, like an enervating amount of Shakespeare out of context.

And when Wilkes (Colt W. Keeney), as Antony, stands over the body of Caesar (JD Martin) and speaks a version of a famous speech, Wimpee’s tweaking of the text is unnecessarily heavy-handed: “the Southern spirit, ranging for revenge, with Stonewall by its side come hot from hell, shall in these confines with a rebel yell, cry ‘havoc!’ and let slip the dogs of war.”

The paradox of this production, performed in the round on an almost bare stage, is that despite the closeness of the action, the play itself feels remote. With a cast of 12, including Fellini as the Booth sister Asia and a chorus of four who double as scheming Confederates, it’s too crowded with people we don’t know well enough to care about. We also don’t particularly gain understanding of the most inherently intriguing characters — Edwin, Wilkes and Asia, who is fondly devoted to Wilkes — or the relationships between them.

Before the show begins, Fellini warns the audience that the performance will include flashing lights and caps fired. There’s something else, though, that could be legitimately upsetting: when fire breaks out during the benefit, and we are urged variously to exit (“Get out of your seats! Go! Go!”) and to remain calm. Why even toy with that? Of all the valuable sensations this show might evoke, panic in the crowd is not among them.