In Singapore, Guys and Their Pateks 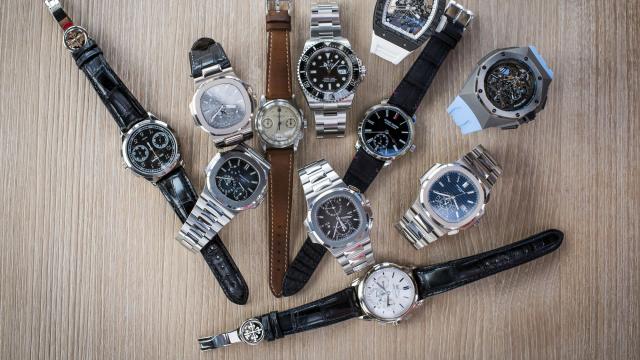 SINGAPORE — Over one weekend in late August, a group of 11 millennial-aged watch collectors from Hong Kong; Sydney; Shanghai; Taiwan and Yangon, Myanmar, converged on Singapore.

The attraction? A celebration of #PatekAcademy, a new Instagram affinity group that had 2,655 followers a little more than two months later. But Patek Philippe, the family-owned Swiss brand known for its horological expertise and elegant style, did not have a thing to do with it.

“We’re creating our own community,” said Shoyo Kawamura, 23, the group’s co-founder, who compiled the guest list, organized events and picked up the tab once his guests were in Singapore.

Instagram is the group’s raison d'être — several of the members are well-known influencers (check @horoloupe and @singaporewatchclub). And they just enjoy the company of contemporaries with similar lifestyles and interests, like cigars, whiskey and fast cars.

“Collectors like us have more influence than watch magazines now,” Kawamura said. “We post authentic watches that we’ve paid our hard-earned money on.”

Kawamura is finishing a marketing degree in Singapore and helping to manage his family’s vast portfolio of private equity investments; his focus includes the city state and Malaysia.

For #PatekAcademy, the budding tycoon hosted three GTGs — watch group slang for “get together:” a dinner at Straits Clan, a private club; a late-night party at Zouk, and the highlight event, a Saturday afternoon jaunt on a luxury catamaran that circled nearby islands in the Singapore Strait.

During the four-hour trip on a blisteringly hot day, the men smoked Cohiba cigars and downed drinks as they searched for shade to take photos of their Pateks — many on wrists, others carefully arranged on a blue tarp laid on an upper deck. They talked timepieces, quizzed one another on Patek esoterica and traded tips on how to find rare watches. The girlfriends who were along (none of whom are watch collectors) donned bikinis and sat on beach towels, chatting, before the buffet lunch.

Kawamura rolled up the sleeves of his white linen shirt to display his blue-faced Ref. 5270G Perpetual Calendar Chronograph on his left wrist. Released in 2011, its dial was packed by Patek with the day and month at 12 o’clock, a 30-minute counter at 3, a moon phase date at 6, and a seconds indicator at 9.

It is one of the 30 to 40 watches in Kawamura’s collection, which includes a number of Pateks, but also Rolex, Piaget, Hublot, Omega and Breitling — some of which he bought and others that were passed on by his father. “Collecting is a huge part of my life,” he said, estimating the value of his watches at more than 1 million Singapore dollars ($725,210).

To show his friends, Kawamura had brought along a Patek 5170G-001 18-Karat White Gold Chronograph with Breguet numerals and a black dial, co-branded with Tiffany & Co. “For young collectors, buying is easier now,” Kawamura said, recalling that when he first started collecting at age 14, he had to pore over glossy catalogs. “Now it’s all available on the web. You see a watch on Instagram and, boom, there’s the price and its whole story — everything in a single click.”

He also had his Patek Ref. 130 Chronograph in steel, the vintage 1939 timepiece that he bought two years ago in a Christie’s auction, one of his most valuable pieces. It came with the original import stamp from Portuguese customs and an original band, all of which he keeps in his safe. “The Instagram response has been very positive,” he said, referring to the comments he has received on posted photos of the watch.

During the cruise, some of the men chided the other #PatekAcademy founder, Andy Zhang, for getting tiny scratches on his watches — he wears six in rotation — while cooking and playing with his two toddlers. A Shanghai native who lives mostly in Sydney, Zhang works in his family’s property business, based in the Philippines, and in his own fashion boutiques.

Four years ago, Zhang began what some call the first Instagram hashtag group for watch lovers, #LangeNation, connecting fans of the A. Lange & Söhne brand; now, with over 9,000 followers, it has begun to host official events with the German watchmaker. “Brands used to ignore social media, but they don’t now,” he said. “It has reshaped the whole industry.”

“They prefer selling to clients they know, to protect the brand,” he added, pointing at what he calls his “milestone” watch: Patek’s 40th Anniversary Nautilus Chronograph, Ref. 5976/1G. He bought the white-gold timepiece last year after meeting a senior Patek executive at a private dinner. “He called Geneva that day for me,” Zhang recalled. “It was the last piece available.”

Like Kawamura, Zhang is a member of the Shanghai Watch Gang, founded last year. They say it is the largest millennial watch community, with more than 8,300 followers on Instagram and a Facebook page, and regulars attend GTGs at the 442 Club, a private club in the Shanghai Xintiandi development.

Among those regulars is Austen Chu De Krassel, known as Chu, who flew in for the #PatekAcademy event.

At 22, Chu has more than 80,700 followers on his personal Instagram account, @horoloupe, where he posts daily. Chu said watch brands had offered to pay him as much as $3,000 a post — but he never accepted the offers: “I would have to post brand products I don’t like; the stuff that doesn’t sell.” After the boat docked, the group went on to drinks at the Patek Philippe boutique in the upmarket Ion Orchard mall, hosted by Cortina Watch, Patek’s retail partner in Singapore.

While sipping Champagne and eating beef cheek, Kawamura showed off his new Patek purchase, which he picked up at the event: the sought-after Ref. 5131/1P-001 World Time. The cloisonné enamel dial (39.5 millimeters wide) has a colorful Earth map — the North Pole at its center — surrounded by a day/night indicator and a 24-hour ring with 24 cities to represent the world’s main time zones. The rice-bead link bracelet is available only in platinum.

Released last year at the Baselworld trade fair, the 5131/1P was the first one that Cortina Watch had managed to get for the Singapore store, according to Andy Thong, the boutique’s customer relations consultant. The price was 171,700 Singapore dollars.

Select customers can order such prized watches — Zhang said he would pick up his 5131/1P later this month in Sydney — but Instagram sites have proved to be a problem for dealers. “Most Instagram pictures are of the old collections and demand for these is crazy,” Thong said. “We don’t have them to sell; they are asking for what we can’t get.”

Kawamura hopes to ride what he thinks will be a potential wave of millennial demand by opening his own vintage and rare finds shop. And in preparation, he is considering two watchmaking courses in Switzerland next year.

“It’s a matter of time,” he said. “People our age are getting exposed to collecting through social media. There should be more coming.”