In San Francisco, Thousands with Pot Convictions Will Find Their Records Cleared 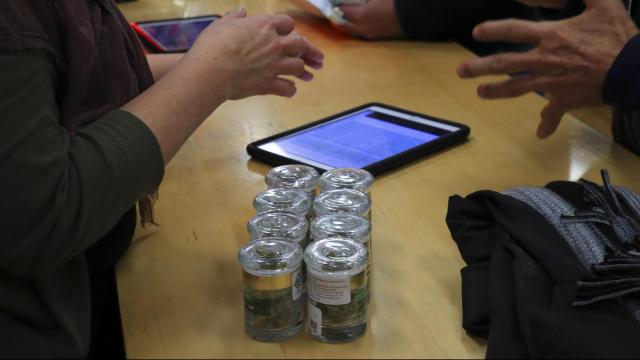 Recreational marijuana became legal in California this year, and the law allowed those with prior low-level offenses to petition for expungement, a process that can be costly.

But in San Francisco, people need not ask. George Gascón, San Francisco’s district attorney, said his office would automatically erase those convictions, which total about 3,000.

An additional 4,900 felony marijuana charges will be examined by prosecutors to determine if they should be retroactively reduced to misdemeanors.

San Diego has identified 4,700 cases, both felonies and misdemeanors, that will be cleared or downgraded.

California was far from the first state to legalize recreational marijuana, but it is at the forefront of offering relief to people convicted of offenses that would not get them in trouble today.

A number of cities even decided to give preference to those who have previous marijuana convictions when giving out licenses to sell it legally. Oakland reserved at least half of its eight annual dispensary licenses for what it calls equity applicants, which include not only those convicted of marijuana-related crimes, but those who live in neighborhoods that had a disproportionately higher number of cannabis-related arrests. On Wednesday, officials there spun a bingo machine to choose the four winners among 36 applicants.

Other places have taken the opposite tack. In Nevada, Gov. Brian Sandoval vetoed legislation last year that would have allowed people convicted of possessing 1 ounce or less of marijuana to have their convictions vacated, even though that is no longer a criminal offense.

And in Colorado, it took five years after voters approved recreational marijuana use before the state passed legislation last year that allows people with pot convictions to apply to have their records cleared. That change did not occur until after California voters approved their law.

The result has been legal limbo: People whose behavior would not now be considered illegal are sometimes unable to find work, get college loans, obtain professional licenses or find decent housing because of the blot on their record.

Those who argue against expunging criminal records say people who violated the law should live with the consequences, regardless of subsequent legal changes.

“In all the other states, the process has been messy. But whether people agree with what they did or not, California at least addressed it and there’s value in that,” said Robert Mikos, a professor at Vanderbilt University who studies marijuana law and policy.

Even in California, there is significant variation in how counties are handling misdemeanor pot convictions. Some, like Fresno County, are dealing with them on a case-by-case basis, said Steve E. Wright, the county’s assistant district attorney. Jeff Rosen, district attorney of Santa Clara County, said he was working with the local public defender’s office to identify cases. And prosecutors in San Francisco and San Diego have been more proactive, with both cities planning to automatically dismiss misdemeanor convictions and to reduce felony convictions to misdemeanors.

In San Francisco, Gascón said he wanted to avoid putting people through a process that he said violates the spirit of legalization.

“A lot of people don’t even know they qualify, and I don’t think it’s the right thing to do to make people pay lawyers’ fees and jump through a bunch of hoops to get something they should be getting anyway,” he said.

In November 2016, California voters approved Proposition 64, which allowed adults 21 and older to buy or possess 28.5 grams of marijuana — about 1 ounce — or grow up to six plants at a private residence.

In Washington, D.C., cannabis use is legal, but it cannot be sold commercially.

In Canada, which is moving toward legalization of recreational marijuana this year, Prime Minister Justin Trudeau has warned that for now, the police and prosecutors will continue to treat pot sales as a crime.

“We recognize that anyone who is currently purchasing marijuana is participating in illegal activity that is funding criminal organizations and street gangs, and therefore we do not want to encourage, in any way, people to engage in that behavior until the law has changed,” Trudeau told reporters.