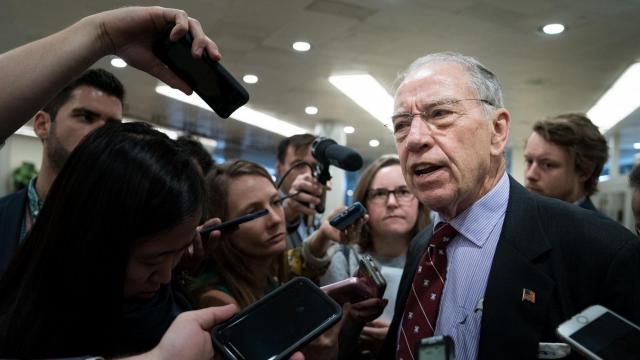 WASHINGTON — For more than two weeks he held back. Against all his instincts, President Donald Trump for the most part resisted directly attacking the woman whose sexual assault allegation has jeopardized his Supreme Court nomination. The accuser was to be treated with kid gloves, like “a Fabergé egg,” as one adviser put it.

But Trump could resist for only so long and told aides it was time to turn up the heat. So when he revved up a political rally this week by mocking Christine Blasey Ford, he indulged his desire to fight back and galvanized his conservative base even at the risk of alienating the very moderate Republicans he needs to confirm Judge Brett Kavanaugh to the Supreme Court.

The president’s scathing and derisive impression of Blasey, who has accused Kavanaugh of sexually assaulting her when they were teenagers, came at the same time his Republican allies stepped up their efforts to challenge her veracity. Seizing on a sworn statement from a former boyfriend, Republicans suggested that she had not been fully truthful in her testimony before the Senate Judiciary Committee last week.

The gloves-off approach could further complicate Trump’s efforts to confirm Kavanaugh to the Supreme Court by winning over three undecided Republican senators who have insisted that Blasey’s allegation be taken seriously: Susan Collins of Maine, Jeff Flake of Arizona and Lisa Murkowski of Alaska. All three on Wednesday condemned the president’s rally riff, using phrases like “wholly inappropriate,” “kind of appalling” and “just plain wrong.” Even some of the president’s strongest supporters called his attack on Blasey counterproductive, including Sen. Lindsey Graham, R-S.C., Kavanaugh’s most outspoken supporter, and the hosts of “Fox & Friends,” the president’s favorite morning television program.

“I would tell him, ‘Knock it off; you’re not helping,'” Graham said at the Atlantic Festival in Washington.

The more aggressive attack on Blasey’s credibility came after Democrats had spent days picking apart Kavanaugh’s testimony, looking for contradictions to undercut his denials that he ever mistreated women while drunk in high school and college. On Wednesday, Senate Democrats escalated their attack by suggesting there was undisclosed evidence of inappropriate behavior by Kavanaugh in prior FBI background checks for previous positions.

By questioning Blasey’s truthfulness, Republicans hope to raise similar doubts about her.

“Democrats were clearly mounting an aggressive campaign to question the character of Judge Kavanaugh by calling out his judicial temperament and whether his alcohol use is excessive,” said Ron Bonjean, a Republican strategist who worked for the White House to confirm Justice Neil Gorsuch last year. “The reaction to this was a forceful response by Trump and a letter released by the Judiciary Committee that questioned the credibility of Dr. Ford through her memory lapses and a previous relationship.”

New polls released Wednesday showed that Blasey fared better with the public than Kavanaugh did during last week’s hearing. In a survey for NPR, PBS and Marist College, 45 percent of Americans said they believed she was telling the truth, while 33 percent said he was. Forty-one percent of those who responded to Reuters and Ipsos opposed his confirmation, while 33 percent supported it. That was the opposite of what happened after Clarence Thomas was accused of sexual harassment by Anita Hill during his 1991 confirmation hearings, when polls showed more Americans believed him than her. The disparate results reflect the changing national attitude toward sexual misconduct in the #MeToo era when the public has been more receptive to women coming forward with allegations.

With midterm elections less than five weeks away, that has immediate consequences for Trump and the Republicans. The Cook Political Report, which tracks congressional races, shifted eight more Republican-held House seats on Wednesday in the direction of Democrats as “the Kavanaugh debate further polarizes voters into red and blue corners.” Still, the NPR/PBS NewsHour/Marist poll found that Republicans were more energized about the election than before, possibly owing to the Supreme Court fight.

Until now, the Republican strategy has been to defend Kavanaugh and accuse Democrats of a “con game,” as Trump has put it, for exploiting Blasey for partisan gain. Trump has strayed from that script a couple of times but largely restrained his more combative instincts when it came to Blasey. In fact, after last week’s hearing, he called her “a very credible witness” and “a very fine woman” whose testimony was “very compelling.”

White House officials on Wednesday insisted that the president was not mocking Blasey but “stating the facts,” as Sarah Huckabee Sanders, the White House press secretary, put it. She expressed indignation at the idea that Kavanaugh’s credibility could be questioned but not Blasey’s. “Every single word Judge Kavanaugh has said has been picked apart,” she said. “Every single word, second by second, of his testimony has been picked apart. Yet if anybody says anything about the accusations that have been thrown against them, that’s totally off limits and outrageous.”

Kellyanne Conway, the president’s counselor who recently said she too was a victim of sexual assault, insisted that Trump was not attacking Blasey.

“She’s been treated like a Fabergé egg by all of us, beginning with me and the president,” Conway told reporters. “He’s pointed out factual inconsistencies. Do you have corroboration for her claims? Can you fill in her memory gaps or her factual inconsistencies? That is part of the evidence-gathering process in any hunt for truth.”

That was not how the undecided Republican senators saw it. “I wish he hadn’t have done it, and I just say it’s kind of appalling,” Flake told NBC News. Collins told reporters in the Capitol the comments were “just plain wrong.”

Murkowski said the remarks would factor into her vote. “I am taking everything into account,” she said. “The president’s comments yesterday mocking Dr. Ford were wholly inappropriate and in my view unacceptable.”

At the same time, Sen. Charles Grassley, R-Iowa, the chairman of the Judiciary Committee, confronted Blasey’s lawyers with a sworn statement from a former boyfriend challenging some of her testimony.

Blasey, a psychology professor from California who also goes by her married name, Ford, was asked during the hearing whether she had “ever given tips or advice to somebody who was looking to take a polygraph test.” She answered, “Never.”

But the former boyfriend, who was identified by a person briefed on the matter as Brian Merrick, told the committee that when they were dating in the 1990s he witnessed Blasey helping a friend, Monica McLean, prepare for a possible polygraph examination while applying for positions with the FBI or federal prosecutor’s office.

“I witnessed Dr. Ford help McLean prepare for a potential polygraph exam,” Merrick said in the statement. “Dr. Ford explained in detail what to expect, how polygraphs worked and helped McLean become familiar and less nervous about the exam.”

McLean, now a former FBI agent, denied the assertion Wednesday. “I have never had Christine Blasey Ford, or anybody else, prepare me, or provide any other type of assistance whatsoever in connection with any polygraph exam I have taken at any time,” she said in a statement.

Blasey’s camp also rejected the account. “She stands by her testimony,” a member of her legal team said in a statement.

In his statement, Merrick said he first met Blasey in 1989 or 1990 in California and after a period of friendship they dated from 1992 to 1998. “I found her truthful and maintain no animus toward her,” he wrote.

But he did not corroborate her account of an assault by Kavanaugh and challenged other elements of her testimony. “During our time dating, Dr. Ford never brought up anything regarding her experience as a victim of sexual assault, harassment, or misconduct,” he wrote.

Blasey has already said that she did not tell anyone about the experience until discussing it in 2002 with the man who is now her husband and later with a therapist in 2012. Many victims of sexual assault do not bring up their experiences for years after the events. Merrick took issue with Blasey’s professed fear of flying and of confined spaces, noting that they once traveled around the Hawaiian islands in a propeller plane. He also wrote that they broke up “once I discovered that Dr. Ford was unfaithful” and that she continued to use a credit card they shared nearly a year before he took her off the account.

“When confronted, Dr. Ford said she did not use the card, but later admitted to the use after I threatened to involve fraud protection,” he said.

None of which has resolved the main dispute, which is whether a sexual predator is about to be given a lifetime appointment to the nation’s highest court or a grave injustice has been done to a respected public servant whose reputation may be stained for life.

“Despite the spin wars,” Bonjean said, “what really matters for the deciding senators is whether there is real evidence or corroboration that a sexual assault actually occurred.”