In Red-Leaning Kansas, Democrat’s Target Isn’t on Ballot (and It’s Not Trump) 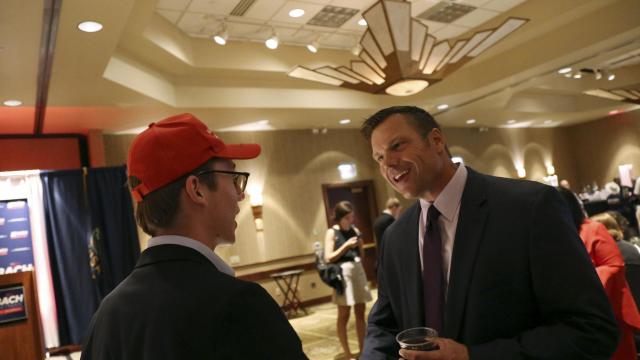 GARDEN CITY, Kan. — State Sen. Laura Kelly, the Democrat running for governor of Kansas, likes to talk about Sam Brownback, the Republican ex-governor. At a debate last week, she mentioned him five times. And that was just in her two-minute opening statement.

Democrats see a path to power in red-leaning Kansas this way: Talk a lot about Brownback and his tax-slashing experiment that left gaping state revenue shortfalls in recent years. Then tie the ex-governor as closely as possible to Secretary of State Kris W. Kobach, the Republican nominee for governor, who has burnished a national profile with ominous warnings about vote fraud and illegal immigration.

Polls have shown an especially close race, and Brownback, who left office in January to become an ambassador, looms large. His legacy is so problematic that Kobach has taken pains to distance himself without offending core Republican voters. And Brownback’s name is so toxic that Kelly utters it as often as possible: in stump speeches, commercials, campaign emails.

Speaking to the debate crowd at a packed middle school auditorium in Garden City, a Republican stronghold in the state’s rural southwest, Kelly said, “Everywhere you look: Our schools, our roads, our economy, our health care, all devastated by the Brownback tax experiment.”

“Do we stay on the road to recovery and slam the door on the Brownback experiment once and for all?” she asked. “Or do we promote the man who has promised to repeat the Brownback disaster?”

Kevin McWhorter, 60, a Republican investment banker from Wichita, said he planned to cross party lines to vote for Kelly. McWhorter, a self-identified moderate who has donated to Kelly’s campaign, said he was pulled left by fears that Kobach would be a repeat of the Brownback years.

“Kansas has always been a common sense state. Even though it was very conservative, we had a lot of common sense people,” McWhorter said. “When Sam Brownback came into office, that stopped.”

Kansas is a study in political contradictions. For generations, Republican presidential candidates have carried the state, usually by huge margins. And at the Capitol in Topeka, conservative legislators have expanded gun rights and restricted abortions. But the governorship has passed from party to party, and had been under Democratic control from 2003 until early 2011, a fact mentioned often these days by nervous Republicans.

“If historical patterns were to hold true, they would suggest I would lose this race,” Kobach said after he warned supporters in Dodge City that liberals were casting early ballots in large numbers. “Counteracting that, you have the fact Kansas is a red state, Republicans do outnumber Democrats. Those two forces are kind of butting up against each other.”

Kelly, who supports Medicaid expansion and talks often about funding schools and roads, has tried to take advantage of a longtime split between Kobach’s conservative wing of the Republican Party and a sizable contingent of moderates.

She also has regularly noted the endorsements of dozens of former Republican elected officials, including two ex-governors and two former U.S. senators. It’s a way of playing up her claims of bipartisanship, but also a tacit acknowledgment that there aren’t enough Democrats in Kansas to win with them alone. Former Gov. Bill Graves, one of the Republicans supporting Kelly, said he was moved to make his endorsement because “Gov. Brownback’s grand experiment was a complete and utter failure.”

“We need to get back to basics,” said Graves, who suggested Kobach would revive the Brownback tax policy and that Kelly would govern from the center.

Brownback, who served seven years as governor, was elected along with Kobach in 2010, and the two men have long shared a commitment to cutting taxes and enacting socially conservative policies.

Brownback promised Kansas residents that his signature tax-slashing philosophy would be a national model and provide a “shot of adrenaline” to the state’s economy, but that growth never materialized.

Many residents, and even some Republican lawmakers, soured on the so-called tax experiment as the state faced deep revenue deficits and painful budget cuts. A bipartisan group of lawmakers overrode Brownback’s veto last year and reversed most of the tax policy.

Last fall, a survey of Kansans found 70 percent of people dissatisfied or very dissatisfied with Brownback’s performance. But Democrats have tried to capitalize on that before, with mixed results. In 2014, when Brownback was seeking a second term, the Democrat lost the governor’s race despite leading in pre-election polls. In 2016, Democrats and moderate Republicans made some gains in the state Legislature.

Kobach, a Breitbart columnist and steadfast ally of Donald Trump, has long made national headlines for crafting and defending local restrictions on unauthorized immigrants and for making unsupported claims about rampant voter fraud. Kobach has stressed those issues on the campaign trail. But he has also tried to draw a distinction between himself and Brownback, saying the ex-governor erred by cutting taxes without first making large cuts to state government, as he would do. Kobach even suggested that Kelly was the more Brownback-like candidate.

Kansas Democrats, currently on the sidelines in Topeka and shut out of the congressional delegation, see this election as a rare opportunity to reclaim their footing. In addition to Kelly’s race, party leaders think they can flip two House seats in the eastern part of the state. And in recent days, outraged Democrats have rallied around the issue of Dodge City’s only Election Day polling place being moved outside town, which many see as a blatant attempt to suppress Hispanic votes. A federal judge heard arguments Thursday on a lawsuit seeking a second polling place in Dodge City.

Democrats’ enthusiasm aside, there are reasons for skepticism about their chances. Kelly’s support for abortion rights and some forms of gun control could scare off swing voters. And Kansans wary of Kobach but not eager to vote for a Democrat have other options. Greg Orman, a businessman running for governor as an independent, has polled in the high single-digits in many polls and could tip a close race to the Republicans. There is also the matter of Brownback, Kelly’s favorite rhetorical target, not being in Kansas anymore.

“It’s not necessarily playing as well,” said Kelly Arnold, the chairman of the Kansas Republican Party. “Gov. Brownback is no longer the governor. He’s out of the state.”

But the awkwardness remains. At another debate this week, the moderator asked the candidates to raise their hand if they thought Brownback was a good governor.

Kobach glanced ever so slightly to his left, then to his right. Then, for a little more than a second, he lifted his arm.