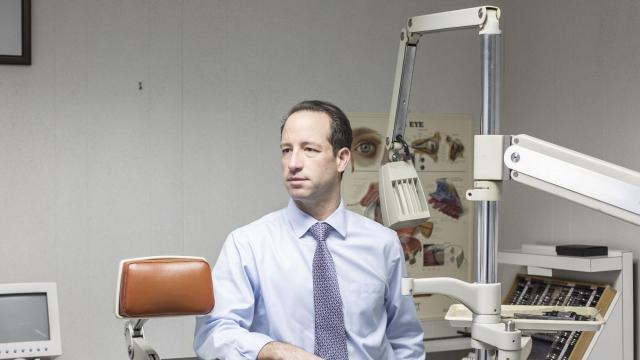 LIVINGSTON, N.J. — Politically speaking, Livingston is not the bluest of the suburbs surrounding New York City. But there are few places where people are feeling any more anxious about the potential impact of the federal tax bill proposed by Republican leaders in Washington.

“They’re crippling us,” said Walter Levine, who has lived in this New Jersey community since 1976.

As Levine sees it, Livingston, a fairly affluent town with a population of about 30,000, could become even less affordable as residents face rising tax bills and falling home values. They could be left with less disposable income to spend in the local stores, setting off a “domino effect” that could derail the town’s economy.

It is a dire forecast, but not a radical one. Livingston sits on the western edge of Essex County, which Moody’s Analytics, a company that provides economic research, placed at the top of its list of places whose housing markets would suffer the most under the Republicans’ plan. According to Moody’s, the tax proposal could carve as much as 10.5 percent off the projected value of homes in Essex County in two years. Six other New Jersey counties made the top 10 on Moody’s list.

Livingston’s Republican representative in Congress, Rodney Frelinghuysen, voted against the House version of the tax bill because, he said, of the “very negative impacts it would have on so many of my fellow New Jerseyans.”

In many ways, Livingston is a microcosm of all the forces that will collide in the heavily taxed towns that ring New York City when the proposed tax law takes effect. These are places that have drawn residents willing to stretch their budgets to cover big mortgages and high property taxes in exchange for good schools and a comfortable lifestyle, understanding that they could deduct their local levies and reduce their federal taxes. But the tax bill would radically alter that equation, forcing potentially painful choices in towns like Livingston. For some, the math just may not work anymore, driving them and their neighbors to reconsider the classic suburban dream.

“No one gets creamed more than New Jersey from this tax bill,” said Mark Zandi, chief economist for Moody’s Analytics. He said the state was particularly vulnerable because its homes are expensive, its property taxes are the highest in the nation and it also has a high state income tax.

“It’s going to put really severe fiscal pressure on local governments, and they’re going to be between a rock and a hard place,” Zandi said.

The tax bills passed by the House and Senate would take away people’s ability to deduct much of what they pay in state and local taxes from their income on federal tax returns. Those deductions would be limited to $10,000 in a combination of property taxes and other state and local taxes.

Those changes loom like a dark cloud over Livingston, where the average homeowner pays more than $15,000 a year in local taxes and many pay a multiple of that sum.

Levine estimated that his taxes would rise $14,000 a year, just from the loss of deductions on the state and local taxes he pays. He said he anticipated more questions from his brothers about why he has not packed up and moved to Florida like they did.

Indeed, the most frequently cited example of a refugee from New Jersey’s high taxes involves a former Livingston resident, David Tepper. Tepper, a wealthy hedge-fund manager, moved to Florida two years ago and took his business with him.

Elected officials in Livingston, who pride themselves on the town’s highly rated schools, broad array of services and ethnic diversity, worry that their town could lose some of its appeal. Rudy Fernandez, a council member and former mayor, said he feared that job-seekers would steer clear of Livingston and neighboring suburbs if they could not deduct the taxes they would pay to the state and local governments.

Shawn Klein, an ophthalmologist who serves as mayor, said, “We’re also worried about if there is a depression in the economy. How does that affect our local economy? Do we start having empty storefronts?”

Cheryl Press, who runs a jewelry business with her husband, George, on South Livingston Avenue, said they had to “reinvent” their business after the financial crisis of a decade ago to emphasize service and repairs because customers had less money to spend. “We had that conversation this weekend,” Press said. “Are we going to have to reinvent ourselves again?” On a recent weekday afternoon, one of the largest gatherings in Livingston was a group of about 100 people playing bridge in the VFW hall. Many of them were from other towns, but they all seemed to share concerns about the tax bill making their lifestyles more precarious.

Richard Bindelglass, a retired executive from the Martinsville section of Bridgewater, a town south of Livingston, estimated that his federal tax bill would rise about $5,000, an increase that would spur him to consider selling his house and moving. He said the local school system had already cut some programs to save money, but he expected the schools-or-taxes tension to grow.

“I assume we’re going to get some anti-tax candidates for the school board with a mandate to lower the total spend and lower the tax,” he said.

Sumner Freedman, 73, a resident of Short Hills, another well-off town near Livingston, said the property taxes in his town were “ridiculous” and sharp cuts to the ability to deduct them would hurt the middle class in the region. He admitted that the $17,000 he pays in annual property tax indicated that his home was quite valuable. But, he added, “You can’t eat your house.”

The pending tax changes have been a prime topic of conversation this past week among the diners at Eppes Essen, a Jewish delicatessen on one of Livingston’s main thoroughfares, said its manager, Jeff Lajqi.

Lajqi, a native of Kosovo, said some customers had called him conservative for saying that he did not mind paying taxes as long as the revenue was put to productive use. Then again, he admitted that he was among the minority of Livingston residents paying less than $10,000 in annual property taxes and could not relate to the concerns of some of his rich neighbors.

“If they’re raising the taxes, you know what’s going to happen: everyone’s going to raise prices,” Lajqi said. Picking up a loaf of challah bread, he added, “Raise my taxes, I raise your challah.”

Still, some Livingston residents were more sanguine about the potential impact of the tax changes. Rajesh Agarwal, who commutes to Manhattan to work on Wall Street, took a financier’s approach to the situation.

“Property taxes always tended to be on the high side,” in Livingston and surrounding towns, he said. The question for people like him and his wife, Anju, will be: “How much incrementally worse off are you willing to be?” he said.

With one child in middle school and one at Livingston High School, where nearly one-quarter of the student body is of Asian descent, Agarwal said his family was unlikely to decamp for a place with a lower cost of living. “The school district and the town and the quality of life will probably rule the day,” he said. Punam Bhargava, a real estate agent with Berkshire Hathaway HomeServices who said she had sold 180 homes in Livingston to Indian couples, including the Agarwals, was holding out hope that the proposed tax changes would not come to pass. She and her manager, Christian Quaritius, had just returned from an industry convention in Atlantic City where speculation of a price decline of as much as 10 percent was flying about.

Bhargava said the Livingston market has been so strong, she had trouble imagining a significant drop in demand. She said her office had sold more than 400 homes this year at an average price of $723,000, with most of them on the market for no longer than a few weeks.

“There are people that are just Livingston people,” she said. “They are not moving no matter what.”

Still, a precipitous spike in taxes could force some people’s hand. “I think there are homeowners that would sell,” Quaritius said. “But then the question is, where would I go?