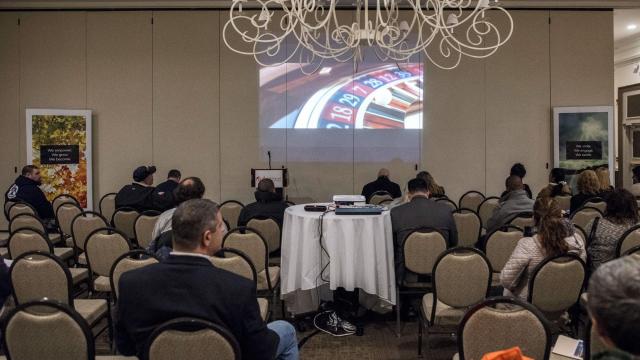 MONTICELLO, N.Y. — Sherelle Baker was spending more money on gas driving to work from her home here than she made at the job as a waitress-bartender. Then her hours got cut.

But in mid-December, Baker walked out of a job fair at the local Ramada Inn with a new position at the soon-to-open Resorts World Catskills, the $1.2 billion casino resort that proponents say will revive Sullivan County, a once-booming area known as the borscht belt for its hotels, bungalow colonies and performers, appealing to Jewish vacationers.

“It seems like there’s this gray cloud over Monticello,” said Baker, 24, who was gleeful about her new job at the front desk of the casino’s hotel, which came with a $7-an-hour pay increase and medical benefits. “Hopefully, this casino will bring more life, more traffic and more business to town.”

The 18-story casino and hotel rises above the tree line on the former grounds of the Concord, the grande dame of the borscht belt, outside Monticello. The building — with 332 suites, bars, restaurants and a 2,000-seat event center — is flanked by the reconfigured Monster golf course; a year-round indoor water park and lodge is under construction nearby that will offer more restaurants, as well as hiking and zip lines.

Resorts World, which is rushing to train 600 dealers in blackjack, craps, baccarat and Pai gow, and hire 1,500 employees, may be the first billion-dollar project to move up its opening date, to mid-February from March 1, in order to be ready for the Chinese New Year. When fully opened, Resorts World will employ about 2,000 people, the casino says.

It is by far the largest and most luxurious of the four new casinos licensed under Gov. Andrew M. Cuomo’s gambling expansion.

“This is a potential major economic boom for upstate New York,” Cuomo said in 2013. “We think it’s one of the best possibilities we have.”

But the Northeast is the most gambling-saturated market in the country. And the three casinos already open — Del Lago in the Finger Lakes Region; Rivers in Schenectady and Tioga Downs near the Pennsylvania border — are performing well below the starry-eyed projections circulated at the time they were approved.

Unlike the other casinos, Resorts World is only 90 miles northwest of New York City and the densely populated suburbs of Westchester County and northern New Jersey. The operators aim to dominate that market, while tapping into Asian gamblers and high rollers from the U.S., England and Asia by emphasizing the kind of plush amenities found in Las Vegas.

This is destination gambling, different from most of the other New York casinos, which are designed to be convenient to gamblers within a 50-mile radius.

“It’s intended to be an integrated resort,” said Ryan Eller, chief executive of Empire Resorts, which owns the casino, as he conducted a tour of the property. “Not only one of the most luxurious options on the East Coast, but one that addresses a wider range of customers with golf, dining, entertainment and a family option.”

Proponents have been talking about casinos as a solution for the flagging Catskills economy ever since the area went into decline in the 1970s. For decades the hotels and bungalows crumbled on the side of the local roads as developers and politicians proposed as many as six tribal casinos. But little happened, until now.

A publicly traded company, Empire Resorts is controlled by KT Lim, chairman of Genting Berhad, one of the world’s largest gambling and resort companies.

Genting operates massive casino resorts in Malaysia, Singapore, Hong Kong and Birmingham, England. More recently, it has pushed into the U.S., with a casino in Las Vegas and Resorts World New York, an electronic slot machine parlor at the Aqueduct Racetrack in Queens.

In November, workers began installing 2,157 electronic slot machines on the 100,000-square-foot casino floor. The machines, with all the latest bells and whistles, cost up to $25,000 apiece. There are also 134 table games and 19 poker tables.

Gamblers will have a view of the forest and hills surrounding the property through large windowed walls.

Almost a quarter of the casino floor is devoted to Asian-oriented table games, such as baccarat and Pai gow. There will be Chinese-speaking dealers and Asian restaurants. An escalator rises to the poker room, and high rollers can take a private elevator up to a “garden suite” on the third floor, where there will be two-story villas with interior pools, all with their own butlers. The top floor of the hotel has presidential suites that are larger than the average American home.

“It’s about status,” Eller said, “something you can’t get anywhere else.”

Resorts World New York City claimed the title for highest grossing slots in the country almost the day after it opened.

But that doesn’t mean that the competition for gamblers in the Northeast is getting easier. Between full-scale casinos, tribal casinos and slot parlors, there are now roughly 58 gambling venues in the Northeast, up from 41 a few years ago. There are now more than 20 in New York.

The $440 million Del Lago opened in February and is now expected to fall $100 million short of its $263 million first-year projection. It is competing with both a racetrack casino and two tribal casinos nearby. “These are projections and numbers put together years ago,” said Jeff Babinski, general manager of the Del Lago. “The economy has changed. We’re not hitting those forecast numbers.”

But, he said, the casino has contributed tax revenue to the state, employed about 1,200 people and boosted tourism in the Finger Lakes.

At some point, however, the casino will close if it cannot make enough money to pay its loans.

“The results have been less than overwhelming,” said Colin Mansfield, a gambling analyst at Fitch Ratings, a financial information company. “We’ve been scratching our heads. There’s new supply that we’re not seeing anywhere else in the country.”

J. Gary Pretlow, the longtime chairman of the State Assembly’s racing and wagering committee, has called on the state comptroller to conduct an audit of the new casinos. He fears that the casinos will plead for lower tax rates and reduce the amount of tax revenue that goes to education.

“If I had my way, the only casino would’ve been in the Catskills,” he said. “The others were doomed from the beginning.” Most gambling analysts say that Resorts World should be successful if only because it is closer to New York City than competing casinos in Atlantic City or the Poconos.

Eller emphasized that it will have a unique position in the Northeast, with its level of amenities and the breadth of its offerings.

But that will not last forever. Steve Wynn, the gambling impresario, is opening the $2.4 billion Wynn Boston Harbor casino resort in Everett, Massachusetts, in 2019. Wynn’s business model is also for an integrated resort.

And MGM plans to open the $950 million MGM Springfield in central Massachusetts later this year. New Jersey is once again considering a casino next to MetLife Stadium, 8 miles west of Times Square. The two tribes with casinos in Connecticut are exploring sites for a third and the Hard Rock company is opening a casino in Atlantic City. And Pennsylvania recently approved adding up to 10 “satellite casinos” to the 12 casinos already operating in the state.

But many residents of the Catskills, hardened by the decades-long talk of revival, are now optimistic.

Alicia Bakken, 25, who labored over a green felt blackjack table at a “dealer’s school” in a storefront in Monticello earlier this month, said the county was finally on the way up.

“Sullivan County has come a long way,” said Bakken, a lifelong resident. “We’re looking at a better environment for everybody.”