In North Dakota, Native Americans Try to Turn an ID Law to Their Advantage 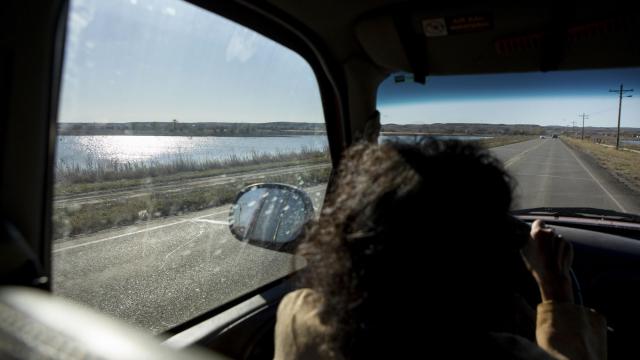 It was on Red Tail Hawk Avenue. They knew that much. But the number was anyone’s guess. Phyllis Young, a longtime tribal activist leading the voter-outreach effort, said it had fallen off the side of the house at some point. Her own home has a number only because she added one with permanent marker.

This is normal on Native American reservations. Buildings lack numbers. Streets lack signs. Even when a house has an address in official records, residents do not necessarily know what it is.

“We know our communities based off our communities,” said Danielle Ta’Sheena Finn, a Standing Rock spokeswoman and tribal judge. “We know, ‘Hey, that’s so-and-so’s house. You go two houses down and that’s the correct place you need to be.'”

Yet under a law the Supreme Court allowed to take effect this month, North Dakotans cannot vote without a residential address. Post office boxes, which many Native Americans rely on, are not enough anymore.

The Republican-controlled state Legislature began debating this requirement just a few months after Heidi Heitkamp, a North Dakota Democrat, won a Senate seat in 2012 with strong support from Native Americans. That race was decided by fewer than 3,000 votes. Heitkamp is now seeking re-election in one of the nation’s most aggressively contested elections, and she is trailing her Republican opponent, Rep. Kevin Cramer, in the polls. And once again, she is looking to Native Americans for a strong vote: there are at least 30,000 of them in North Dakota.

Supporters of the address requirement say it is needed to prevent voter fraud and has nothing to do with Heitkamp. Native Americans, noting that state officials have not confirmed any pattern of fraud, see it as an attempt at voter suppression.

But in these final days before the election, their tribal governments are working feverishly to provide the necessary identification, and some Native Americans believe their anger could actually fuel higher turnout.

“I’m past the point of being upset over it,” said Lonna Jackson-Street, secretary and treasurer of the Spirit Lake Tribe. “I’m more excited about the outcome, because I think we’re going to bring in numbers that we’ve never seen before.”

If that happens, it will be because of a considerable expenditure of time and resources on the part of the tribes and advocacy groups supporting them.

Tribes have extended their office hours and worked around the clock to find efficient ways to assign addresses and issue identification. They are providing hundreds of free IDs when they would normally charge at least $5 to $10 apiece. The Turtle Mountain Band of Chippewa Indians printed so many IDs that the machine overheated and started melting the cards.

“What people out there don’t understand is how much it costs a tribe to make sure that each and every individual tribal member has that right to vote,” said OJ Semans, co-executive director of Four Directions, a Native American voting rights group working with tribal leaders. “The tribes have invested thousands of dollars, whether it’s equipment, man-hours, meetings. This has not come cheap.”

State officials say it is easy for anyone without a residential address to get one. In a letter to tribal leaders last month — just after the U.S. Court of Appeals for the 8th Circuit let the requirement take effect, in a decision later affirmed by the Supreme Court — Secretary of State Al Jaeger’s office wrote that voters could contact their county’s 911 coordinator, describe the location of their home and have an address assigned “in an hour or less.”

In practice, it is not always so simple.

Voters’ experiences have varied greatly based on which county they live in. In Rolette County, where the Turtle Mountain Reservation is, they have been able to get addresses from the county and IDs from the tribe without much red tape. But at Standing Rock, in Sioux County, the 911 coordinator is the sheriff, Frank Landeis. That is a deterrent to people who are afraid to interact with law enforcement, much less tell the sheriff where they live, and Landeis is not easy to reach.

When Finn called him on Oct. 12, three days after the Supreme Court ruling, he was out. On Oct. 15, he said he was transporting prisoners and could not assign addresses that day. He was also unavailable when The New York Times called Friday.

And in an episode recounted independently by Finn, Semans and Young, a tribal elder, Terry Yellow Fat, got through to Landeis only to be assigned the address of a bar near his house. Semans worried that, in addition to playing into stereotypes about Native Americans and alcohol, this could expose Yellow Fat to fraud charges if he voted under an address he knew was incorrect.

So, with help from Four Directions and others, some tribes are creating addresses themselves — and preparing to do so until the polls close.

Geographic information experts at Claremont Graduate University in California overlaid voting precinct maps on satellite images of the reservations and assigned each precinct one address. Voters can now point to their house on the map and be assigned the precinct address plus a unique identifier: -001, -002, and so on. Tribal officials will be stationed at every reservation polling site on Election Day with a form letter on tribal letterhead, ready to assign an address and issue identification on the spot.

Four Directions informed Jaeger of this plan in early October and asked him to endorse it. In his response, which his office provided to The Times, Jaeger declined, saying that whether tribes had the authority to create their own addresses was a question beyond his office’s purview. He added, however, that he could not “dictate the style or format of the identification used by a tribal government if it contains the required voter information,” suggesting that a letter with a handwritten address should be as valid as an ID card. The pace of working with potential voters has been relentless for the tribes. Jackson-Street said Spirit Lake had identified and was trying to reach 211 members without residential addresses, in addition to printing ID cards for members who had addresses but no document showing them. Robin Smith, the tribe’s enrollment director, said Oct. 23 that she had been too inundated with ID requests to budge from her chair all morning.

Merle White Tail, 50, had no street address, so Smith assigned one. Grant Cavanaugh, 32, had an address on file but did not know what it was, so she looked it up. Darien Spotted Bird, 21, had an ID card that misspelled his address, so she printed a new one.

Then there are more subtle problems. For instance, while Sioux County does not offer early voting, it does — like all North Dakota counties — allow early, no-excuse-needed absentee voting, which is functionally almost identical. But Semans said that when one woman went to the county auditor’s office and asked to vote early, the auditor, Barbara Hettich, simply told her there was no early voting and did not mention the absentee option. (Hettich did not respond to a request for comment.)

Later, when Young filled out an absentee ballot, Hettich told her she had to use blue ink or the ballot would not be counted. But literature on the secretary of state’s website says ballots must be filled out in black ink. Semans ping-ponged back and forth between Standing Rock and Bismarck, trying to get a guarantee that ballots would not be thrown out because of ink color. On Friday, Lee Ann Oliver in the secretary of state’s office told The Times that both blue and black were acceptable.

The scene at the get-out-the-vote headquarters in Fort Yates on Oct. 22 showed how hurriedly the whole effort there had been put together. The room was mostly empty. There was a small table, a couple of armchairs, some old swivel chairs, all delivered the day before. The team was trying to create a voter database from a list of people who bought propane last winter. The phones were not hooked up yet.

But soon, canvassers would be fanning out across the reservation, knocking on doors. This year’s Miss Standing Rock, Wanbli Waunsila Wi Eagle, 18, filmed a public service announcement urging her peers to vote. Finn asked the principals of the reservation’s three high schools to excuse age-eligible seniors from class to get IDs and vote. On Election Day, eight vans will shuttle people to and from the polls.

“The right to vote can be taken for granted until someone tries to take it away from you, and then it can be the reason you do vote,” said Jodi Gillette, a Standing Rock member who worked for the Interior Department under President Barack Obama. “Essentially, someone is saying, ‘Sit down and shut up.’ And we’re tired of it.”