In NC, consequences of Postal Service slowdown extend beyond the mailbox 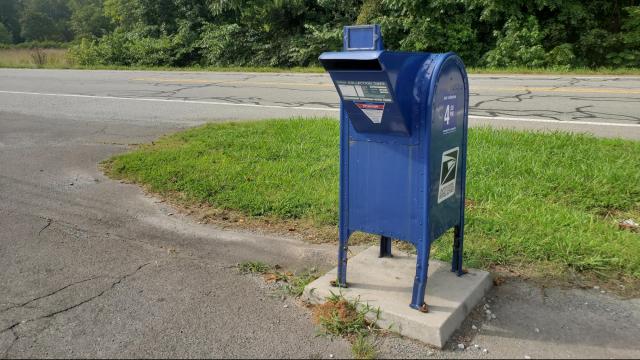 Raleigh, N.C. — By the time headlines across the country began to detail concerns over the U.S. Postal Service, Brunswick County resident Robert Brunson had already suffered the consequences.

A diabetic, Brunson regularly ordered his medication online through a mail-order pharmacy. That process normally took two to three days. In August, it took 10.

The delay meant he missed a few doses. Now, he’s decided to get his medications at a local pharmacy, even though it will cost him double every time he needs a refill.

“Fool me once, shame on you, but fool me twice, shame on me. So I said, ‘OK, we'll wait until this mail thing gets straightened out.'"

Brunson said he has the means and health to be able to wait. But he worries about others who rely on the mail out of necessity, whether for medication, Social Security checks or the upcoming 2020 election.

He worries, he said, about those left behind.

“Gets to be real serious, when the mail is being used,” he said. “For whatever reason – political, whatever – it's always the people on the side, the fringes, that suffer the consequences.”

Brunson wasn’t the only one worried. As mail delivery times climbed throughout the summer, the state Attorney General’s Office fielded dozens of complaints and concerns related to medication delivery through the U.S. Postal Service. Many worried whether their medications would be delivered on time.

Dozens more fretted about whether the Postal Service could deliver hundreds of thousands of absentee ballots in time for the Nov. 3 presidential election.

“It concerns me because it affects, actually, our democracy. I mean, we were always the best mail service in the world. We delivered more mail than any country in the world,” said Eugene Wooster, a retired postmaster who wrote to Attorney General Josh Stein in August and spoke with the NC Watchdog Reporting Network.

“If we don't have a good mail service, we're in serious trouble.”

As mail service slowed, the NC Watchdog Reporting Network sent more than 150 letters throughout the state in August to test the postal system. While the vast majority of letters arrived on time and intact, there were instances that highlighted the concerns making headlines.

Complaints poured in as mail slowed

Shortly after Republican megadonor Louis DeJoy took over in June as postmaster general, he instituted strict limits on overtime, decommissioned dozens of mail sorting machines and ordered mail delivery trucks to depart on time – even if it meant leaving some mail behind, the Washington Post reported.

On-time delivery rates dropped throughout the nation and remain below the Postal Service’s goal of 95% on-time delivery, according to records obtained by the Associated Press.

In his letter to Stein, Wooster urged him to “take appropriate action within your power as attorney general to save our United States Postal Service.”

“It's ridiculous,” said Wooster, who spent more than 30 years with the Postal Service before retiring in the late 1980s. “If you want to destroy the post office, that's what you do. Just take the machines out.”

A USPS spokesman in Charlotte declined to comment after multiple attempts by reporters to ask questions and clarify policies.

In September, Stein joined attorneys general in five other states and the District of Columbia to halt any further changes to Postal Service operations and seek to undo the damage that Stein said has already been done. He said the changes the Postal Service had already made, as well as others in the works, “pose real concerns about the Postal Service's ability to provide timely mail delivery here in North Carolina.”

“We are just weeks away from an election, an election that's occurring in a pandemic, where people rightfully, justifiably, may be fearful about going to a voting location if they're senior or they have some pre-existing health condition,” Stein said in an interview. “So, we cannot have this radical restructuring just weeks before the election; the stakes are simply too high.”

On Monday, a federal court approved the request, called a preliminary injunction, which forbids changes to a wide array of Postal Service operations without first presenting changes to the Postal Regulatory Commission and holding a public hearing. It is the third such federal order that requires the Postal Service to stop widespread changes to its operations prior to the general election.

In late August, DeJoy testified to the U.S. House Committee on Oversight and Reform about the slowdowns, where he said he was not trying to sabotage the election by slowing down mail processing times.

“To be clear, we will do everything we can to handle and deliver election mail in a manner consistent with the proven processes and procedures that we have relied upon for years,” DeJoy told the committee Aug. 24. “Nevertheless, I encourage all Americans who choose to vote by mail to request their ballots early and to vote early as a common sense best practice.”

The same week as DeJoy’s testimony, reporters and editors with the NC Watchdog Reporting Network mailed 153 letters to each other from homes, local post offices, blue collection boxes and rural locations throughout North Carolina.

The U.S. Postal Service says first-class mail – letters mailed with a stamp – should take one to three business days to arrive. Delivery goals say 95% of first-class mail should arrive within five days.

In the Watchdog Reporting Network’s sample of 153 letters, all but two pieces of mail, or 98.6%, arrived on time.

On average, mail sent from a residence to another address took 2.5 days to arrive, compared to 2.15 days or less for letters mailed from the other locations.

Four arrived without a postmark that was identifiable to reporters, and a fifth was smudged so badly that the postmark was illegible.

Ballots that arrive after Election Day and lack a postmark are, typically, thrown out by county boards of elections.

Boards of elections want assurances that voters cast their ballots before the deadline on Election Day. A postmark, which includes the date and time the post office processed the envelope, is a reliable way for election officials to make that judgment.

The waters are murkier in the rare case of a ballot arriving without a postmark. Ballots lacking postmarks that arrive with other mail postmarked before the Election Day deadline can still be considered, some local elections officials said, if elections staff think there is a way to determine when it was processed by the postal service such as the postmarks on other mail with which the ballot arrived.

“The state board’s guidance, it’s always been, if it’s a very gray area, then you want to err on the side of the voter,” Rae Hunter-Havens, elections director in New Hanover County, said. “We don’t want to punish the voter because the post office didn’t put a postmark on it.”

When is your mail-in ballot actually counted? That depends, officials say

However, many county boards throw out ballots lacking a postmark anyway.

During the 2016 presidential election, the Forsyth County Board of Elections rejected 89 ballots received without postmarks in the three days following the general election.

Other local boards have also followed the law to the letter, including New Hanover County, which after the 2018 midterm elections denied 16 ballots for not having a postmark.

Jonathan Washburn, who chaired the New Hanover County Board of Elections at that time, said the issue had come up in the past, when the board met to review absentee ballots before certifying the vote count, and the board needed to follow precedent and state laws and deny the ballots, which he said is unfortunate.

“Many ballots that are valid ballots – valid voters, registered voters – don’t get counted because they don’t follow the correct statutory process," he said in 2018.

The North Carolina State Board of Elections knows postmarks can be a problem; board attorneys flagged the issue in a legal memo prepared for the board in mid-September.

“We are aware that the USPS does not postmark all ballots,” the memo said.

In the 2016 general election, only 4% of North Carolina’s ballots were cast using absentee-by-mail. This year, in part due to fear of contracting the coronavirus, more than a million registered voters – one in seven – have so far requested absentee ballots, and the state is on track to see 40% of the vote cast by mail in 2020.

Already, more than 275,000 voters, including military and overseas voters, have returned their ballots.

This year, voters can track their own absentee ballots with new software, BallotTrax. The data is also available to county boards of election, which could provide them with a second option to verify whether ballots were mailed prior to the deadline.

“BallotTrax now provides county boards and voters with status updates to track ballots in the mail stream,” the memo to the board said. “If a ballot was not postmarked, this information could be researched in BallotTrax to determine if there was affirmative information indicating that the ballot was mailed by Election Day.”

But it’s not clear whether BallotTrax would meet the legal requirement for election officials to verify a ballot mailed prior to the deadline. State law says the ballot requires a postmark, and the interpretation may be up to the courts to decide.

Earlier this month, the state board announced a proposed legal settlement that would extend the number of days after the election in which ballots could be accepted and would expand the criteria for what could be considered evidence of the voter having voted before Election Day. Whether those rules will go into effect will be decided by state and federal courts in the coming weeks, following two lawsuits by Republican leaders challenging the proposal.

Election and postal service officials are advising voters to mail their absentee ballots early, even before the Oct. 27 deadline for requesting an absentee-by-mail ballot. Any later, and there is a fair chance it will not arrive on time to be counted.

Two Postal Service regions include parts of North Carolina: Greensboro and Mid-Carolinas. Those regions had weekly on-time delivery rates of between 90% and 94% before July, figures that were slightly higher than the national average.

In July, those weekly rates dropped to between 84% and 90% for both regions, also slightly above the national average, according to the records. By the end of August, the weekly rates rose to close to 90%, records obtained by the AP show.

Poll: One-third of NC voters have doubts about voting by mail

The Associated Press obtained delivery rates through a Freedom of Information Act request. While service began rebounding toward the end of summer, no Postal Service region was meeting the agency's target of delivering more than 95% of first-class mail within five days.

Back at his Navassa home, Robert Brunson has already returned his absentee ballot. He said he requested and returned it as soon as he could because of his mail experience.

He said, in the end, he doesn’t blame the postal employees he sees stopping at his mailbox each day, but he noted a faltering Postal Service can cause problems beyond delayed mail itself, and he hopes leaders at both the state and federal level will think about the everyday effects.

“It's like a ripple effect. You throw a rock in the water, you will have ripples all the way through the water. And that's exactly what's going on.”

This story was jointly reported and edited by Kate Martin, Frank Taylor and Jordan Wilkie of Carolina Public Press; Ames Alexander and Gavin Off of The Charlotte Observer; Jordan Schrader and Lucille Sherman of The News & Observer; Nick Ochsner of WBTV; Emily Featherston of WECT; Tyler Dukes of WRAL; and Jason deBruyn of WUNC.