In Mississippi, President Campaigns for a Candidate in Trouble 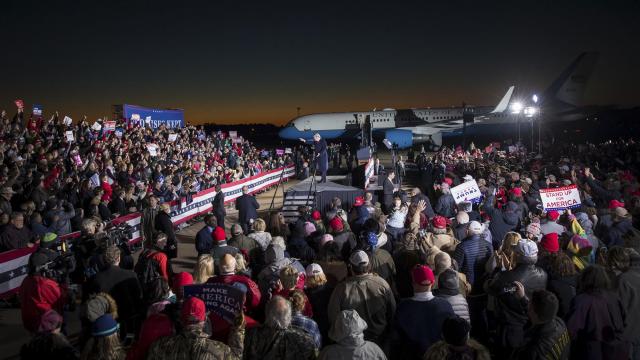 TUPELO, Miss. — President Donald Trump returned to the campaign trail in Mississippi on Monday to offer an unabashed endorsement of a Republican candidate under fire for comments that critics said embraced the state’s segregationist history.

In the first of two public appearances, Trump told his supporters in Tupelo that a vote for Sen. Cindy Hyde-Smith in the runoff election Tuesday would help his administration, underscoring her support for Justice Brett M. Kavanaugh and his policies.

“Cindy is so important, so respected,” Trump said after taking the stage in Tupelo.

And, he noted, her election would further tip the Senate in Republicans’ favor. “If we win tomorrow,” he said, “we’ll be at 53-47.”

His presence in Mississippi was intended to boost Hyde-Smith, who has struggled to unite her party and move beyond a series of controversial statements, including one in which she said if a particular supporter invited her “to a public hanging, I’d be on the front row.”

The comments have prompted a firestorm in a state steeped in an ugly history of racial violence. Hyde-Smith and her Democratic opponent, Mike Espy, a former U.S. representative and the first African-American elected to Congress in Mississippi since Reconstruction, have sparred over what she meant. And major corporate donors, including Ernst & Young, Google, Major League Baseball and Walmart, have requested refunds of their contributions to Hyde-Smith, despite her assertions that her comments reflected “no ill will.”

In the hours before Trump arrived, the race took a disquieting turn with the daybreak discovery of at least two nooses and five handmade signs outside the Capitol. “We’re hanging nooses to remind people that times haven’t changed,” one of the signs read.

But Trump brushed off the controversy over Hyde-Smith’s remarks. “I know her,” the president said before leaving Washington. “And I know she apologized. And she misspoke.”

By some Republican estimations, Trump’s appearances were a signal of how much Hyde-Smith’s standing has eroded in recent weeks and a reminder of just how far Trump will go to secure the largest possible Republican conference in Congress, particularly in the face of a Democratic House majority come January.

But to his supporters gathered at the airport here, Trump made no mention of the controversy that has engulfed Hyde-Smith’s campaign. Instead, Trump focused, as he had done in the days before the midterms, on partisan battles back in Washington, including one held over Kavanaugh’s nomination to the Supreme Court.

“He was beaten up so badly and so unfairly, but we got through it,” Trump said of Kavanaugh, while casting doubt on the accounts of the women who accused him of assault. “There were a lot of lies.”

To emphasize his point, the president traveled to Mississippi with Sen. Lindsey Graham, R-S.C., who in recent months has morphed from Trump’s sometime-adversary into a presidential attack dog who emotionally sparred with Democrats during the bitter nomination process.

“We’re going to start over in 2019,” Graham told the crowd, “and if you like Kavanaugh, there’s more coming.”

Beyond reminding the crowd about battles back in Washington, Trump briefly sharpened his focus on Hyde-Smith’s “far left” opponent, Espy, who was also secretary of agriculture under President Bill Clinton.

But Trump’s decision to support Hyde-Smith, a newcomer to national politics who was appointed this year to her Senate seat by Mississippi’s governor, is perhaps a surer bet than his effort to fortify Moore, among the most controversial Alabama politicians since the segregationist George C. Wallace was governor. Still, the nooses and signs at the Capitol were a chilling reminder of how contentious the Mississippi race has also become. No one immediately claimed responsibility for the nooses or the signs, and Gov. Phil Bryant said that he had asked the FBI to assist with the state’s inquiry.

The nooses were a particularly searing display in a state that had 654 African-American lynching victims between 1877 and 1950, according to research published by the Equal Justice Initiative. And two of the placards appeared to refer to the election: “We want leaders who give honest apologies and can be humble enough to admit when they’re wrong!!!!!” one said. And another: “On Tuesday November 27th thousands of Mississippians will vote for a senator. We need someone who respects lives of lynch victims.”

Republicans noted that Hyde-Smith had been enlisting Trump’s help long before controversy swelled around her candidacy.

“He’s seen as a positive influence by most Mississippians, certainly people who would be inclined to vote for Cindy Hyde-Smith,” said state Rep. Greg Snowden, the second-ranking Republican in the Mississippi House of Representatives.

“He is going to have some effect because the people who are Trump supporters are so mesmerized by him, they overlook all of his warts,” said state Rep. D. Stephen Holland of Tupelo, who owns a funeral home near the airport that hosted one of Trump’s rallies. “The real question is whether he’ll get their spirits fired up, and will they actually go to the polls?”