In Midterms, the Right to Vote Is Still at Issue, Too 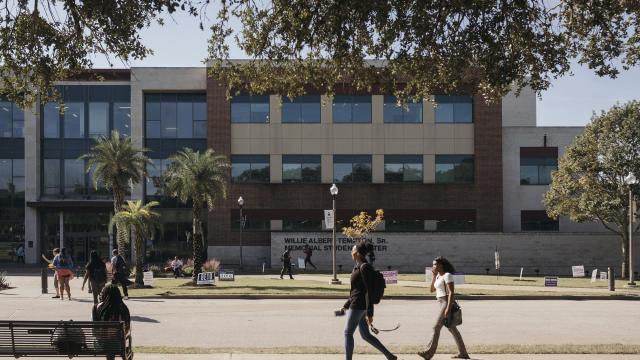 Johnson is one of the plaintiffs in a lawsuit filed last month by the NAACP Legal Defense and Educational Fund alleging that rural Waller County has tried to disenfranchise students at the university over decades, most recently by curtailing early voting on campus.

The polling station at the university’s student center was initially restricted to two days of early voting, compared with two weeks in some other parts of the county — and two weeks at majority-white Texas A&M in a nearby county.

“I don’t want this to be the reason, but it looks like we’re PVAMU in a predominantly white area and they don’t really want us to vote,” Johnson said recently.

Limiting access to voting is rooted deep in American history, beginning with the Founding Fathers and peaking during the Jim Crow era in the South. But in the wake of the civil rights movement and the Voting Rights Act of 1965, the idea that disenfranchising legitimate voters was unethical, and even un-American, gained traction.

No more. Almost two decades after the Bush v. Gore stalemate led to voting rules being viewed as key elements of election strategy, the issue is playing an extraordinary role in the midterm elections.

Restrictions on voting, virtually all imposed by Republicans, reflect rising partisanship, societal shifts producing a more diverse America, and the weakening of the Voting Rights Act by the Supreme Court in 2013.

In North Dakota, Republicans passed an ID law that disproportionally affected Native Americans, strong supporters of the state’s Democratic senator, Heidi Heitkamp, who is in an uphill fight. In Florida, New Hampshire, Texas and Wisconsin, among others, out-of-state university students face unusual hurdles to casting ballots.

Voting-rights advocates in Missouri are arguing in court that the state underfunded efforts to educate residents on a voter ID law. In North Carolina, the legislature’s regulation of early-voting hours has shuttered polling places across the state, even as it purports to increase voting opportunities.

Nathaniel Persily, a Stanford University law professor and elections scholar, said what was going on reflected a shift from a belief in shared rules of democracy toward one that sees elections as struggles for power “in which you need to push up against the rules to win.”

He added, “We’ve reached a situation in which the fight over the rules and who gets to vote is seen as a legitimate part of electoral competition.”

Republicans consistently say restrictions on registering and voting are needed to combat election fraud, a view most prominently expressed in President Donald Trump’s widely derided statement, with no evidence, that millions of illegal voters cost him the popular vote in 2016. Studies regularly conclude that fraud is exceedingly rare; a New York Times survey of 49 state election offices after the 2016 general election found no allegations of widespread fraud, and no fraud claims at all in 26 states.

But even within the Republican Party there is not universal agreement. The Texas secretary of state, Rolando Pablos, a Republican, sent a letter Tuesday asking Waller County to extend early voting at Prairie View’s campus polling site throughout the week. The county resisted, however. It added a single day of additional voting at the university’s student center after the lawsuit was filed, but a top official said it did not have the resources or time to do more.

For Johnson, an independent, getting to other polling sites is difficult. He has a full class schedule to balance with several chemistry and business clubs, and he lives off campus, without a car.

“If I’m not eating or sleeping or studying, I’m really in class or in a meeting,” he said after voting Tuesday at the student center, outfitted with a backpack and a bandanna.

He expressed satisfaction that even a single day of voting had been added, but expected disputes to continue because, as he put it, “we might not vote the way they want us to vote.” While restrictions are on the rise in some states, others have made it easier to vote.

In the last three years alone, 15 states have moved to automatically register voters (unless they opt out) when they visit motor-vehicle agencies. Colorado, Washington and Connecticut now allow all voters to cast ballots by mail, while 37 states and the District of Columbia let voters cast ballots early. Florida voters will decide next week whether to end the disenfranchisement of felons, while 23 states have already loosened similar policies. Six million Americans with felony convictions still cannot cast ballots.

Some experts say that even intentional suppression is not likely to have a huge impact on vote totals.

“The estimates you get are that these sorts of changes might reduce turnout by a percentage point or two,” said Charles Stewart III, an expert on election administration at the Massachusetts Institute of Technology.

But with dozens of congressional and governor’s races now within the margin of polling error, a point or two could easily decide many races — with control of Congress at stake.

Several court rulings say Republicans increasingly are writing voting rules with partisan intent. Voter ID legislation in Texas labels gun licenses acceptable at polling places, but not college identifications. Arizona has made it a crime to collect absentee ballots for transport to a voting site, a staple get-out-the-vote practice.

Nearly 1,000 polling places have been closed nationwide in the last half-decade, according to a recent Pew report. And the number of people being purged from voter rolls is rising sharply, according to a Brennan Center study. Another study by the center last year counted at least 99 bills introduced in 31 states to restrict voting access.

States routinely cull their lists of registered voters of those who have died or moved away, but some purge so aggressively that they sweep up legitimate voters. Ohio’s policy, upheld this year by the Supreme Court, is the strictest: Voters who skip a single election receive a postcard warning them that they are being marked inactive. If they don’t return the card and then don’t vote in the two succeeding elections, they are removed from the rolls.

Such policies can have a profound effect. If Ohio’s policy had been applied in Florida and North Carolina, 89,000 people who voted in 2016 would have been disenfranchised, according to an analysis by Daniel A. Smith of the University of Florida and Michael C. Herron of Dartmouth College.

“It’s shocking,” Smith said. “We don’t ask gun owners to fire their weapons every two years and revoke their licenses four years later if they don’t.” Some voters are pushing back.

“It’s frustrating that young voters are told that they are shameful for not voting, and then when we ask for measures that ensure we can vote, we are often mocked,” said Megan Newsome, 22, a recent graduate of the University of Florida who fought successfully to bring voting back to Florida campuses, and was a plaintiff in a suit against Florida’s secretary of state.

Both parties have something to gain, depending on a larger or smaller electorate.

Traditionally, Democrats do better with a larger electorate, leading Republicans to fight such measures as the 1993 “motor-voter” law that let Americans register at driver-license and public assistance offices. A number of conservative advocacy groups have sprung up in recent years, bankrolling efforts to challenge voter registrations, and are a counterweight to civil rights groups and legal organizations like the American Civil Liberties Union.

“The people that are being quote unquote purged, are dead, usually about 40 percent of the time,” said Logan C. Churchwell, communications and research director at the Public Interest Legal Foundation, one such group. “The remainder of them are relocated out of the jurisdiction and long gone, or felons. You’re not talking about someone who hasn’t moved and are still kicking and breathing,” adding, “You can’t silence a dead guy.”

But thousands of voters who wanted to vote, and who have not moved, have been struck from voter rolls in high-profile incidents from Brooklyn to Georgia to Ohio.

The two secretaries of state most aggressive in culling voter lists are Kris Kobach in Kansas and Brian Kemp in Georgia, who are also both Republican candidates for governor, exacerbating partisan rancor. Kemp has presided over a series of purges and restrictive voter-registration rules that heavily affect minorities. Kemp is white, and his Democratic opponent, Stacey Abrams, is black.

“Voter suppression isn’t only about blocking the vote, it’s also about creating an atmosphere of fear, making people worry that their votes won’t count,” Abrams said at a recent debate.

Kemp has expressed unease at Democratic turnout, but called suggestions of suppression “outrageous” and said that overall “we have 1 million more people on our voting rolls” than when he took office in 2010. But he had a setback Friday when a federal judge ruled that Georgia needed to make it less difficult for naturalized citizens to vote.

For Waller County, voter suppression has weighed on its reputation. It was further tarnished in 2015, when Sandra Bland, a Prairie View alumna, who was heading back to the school to take a job, was the subject of a highly controversial police stop and subsequent jailing that ended with her suicide.

“I got to Waller County in ’05, so every time every story starts with Waller County and its 40-year racist history of disenfranchising voters, I have no connection to that at all,” said Judge Carbett J. Duhon III, a Republican who is the top official setting voting rules.

“Hindsight being 20/20, can I understand students being frustrated that maybe they are excited for one candidate or the other, and they don’t have a place to go vote on campus during that first week?” he asked. “Yeah, I can see that.”