In Lyric McHenry’s Death, a Bronx Man Is Arrested 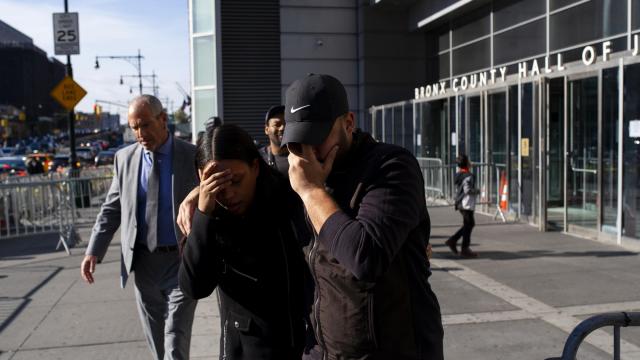 NEW YORK — Lyric McHenry, a Stanford University graduate with a budding film career, slipped away from her 26th birthday party at a Manhattan hotel two months ago without saying goodbye. A few hours later, her lifeless body was discovered on a desolate street in the Bronx. She had scraped knees and a glassine envelope of cocaine in her pocket.

The police said Wednesday they had made an arrest in connection with her death, and the medical examiner ruled her death an accident, offering the first public hints about what may have happened to her.

Alexis Mejia-Ramirez, 29, of the Bronx, was arrested Oct. 15 and charged with concealment of a corpse and tampering with evidence. The police did not announce his arrest at the time. He was released Saturday on $1,500 bail.

Bronx prosecutors said in court documents that Mejia-Ramirez and two other unidentified people dumped McHenry on the sidewalk at Boscobel Place and Undercliff Avenue in the early morning hours of Aug. 14. She was found at 5 a.m.

Mejia-Ramirez declined to comment on the charges after an appearance in Bronx Supreme Court on Wednesday afternoon. His lawyer, Frank Rothman, said his client should not be facing charges at all. “This is a tragic death, but he shouldn’t be charged with a crime,” Rothman said. “How do you conceal a corpse by leaving it on a street in the Bronx?”

A surveillance camera recorded Mejia-Ramirez waiting outside the Dream Hotel on the night McHenry disappeared, a law enforcement official said, speaking on the condition of anonymity to discuss an open investigation. McHenry and Mejia-Ramirez were later seen getting into a white BMW, which drove away from the hotel, the official said.

Doug McHenry, McHenry’s father, said that he had been shown the video of his daughter getting into the white car outside the hotel. “The video shows she looked into the car, then she left, then she came back,” he said. “There was a hesitancy there.”

Maya McHenry, Lyric’s sister who celebrated her birthday with her the night before she died, said in a text message that she had never met Mejia-Ramirez and did not know if he was friends with her sister.

In life, McHenry was a young woman who people felt was going somewhere. Friends and admirers watched her from afar, waiting to see what she would become: maybe a screenwriter or a movie producer, a reality star or a politician. She was at a moment of bright possibility, with all the avenues of a successful life branching before her.

The profile went on to say:

The spotlight on Lyric McHenry in life had meant that she was on the verge of becoming someone, but the spotlight on her in death seemed to foreclose all those possibilities. In the headlines and stories that followed, she was reduced to the facts as written in a hurried police report: black woman, pregnant, possible cocaine, deserted street in the Bronx. What more could there be?

Mejia-Ramirez has not been charged with causing McHenry’s death. The city medical examiner’s office, in ruling her death an accident Wednesday, found she died from an overdose of cocaine, alcohol and heroin. Preliminary tests also revealed she was 20 weeks pregnant, though her friends and family maintain she had been unaware of the pregnancy.

The young woman was raised in West Hollywood, California, by parents who worked in the film industry. Her father was a movie director and a producer, and her mother was a wardrobe stylist. She moved in elite circles and played a role on a reality television show. She was charismatic and glamorous, friends said, with a wide smile and a gap between her two front teeth.

She moved to New York City in the fall of 2015 to pursue work in television, but had recently moved back to Los Angeles, where she was living in her childhood home. Some friends said she struggled with drug use, and with cocaine in particular.

Doug McHenry said that he wanted Mejia-Ramirez and the two others being sought by the police to be found guilty and punished severely. “I do want these people made an example of,” McHenry said.

Even if his daughter overdosed on drugs, he said, she should not have been left alone to die on an empty street. “If they had dropped her off near a hospital or something, things might have been different,” he said.